Will the Squalid Rot of the Wisconsin Republican Party Become America’s Future? 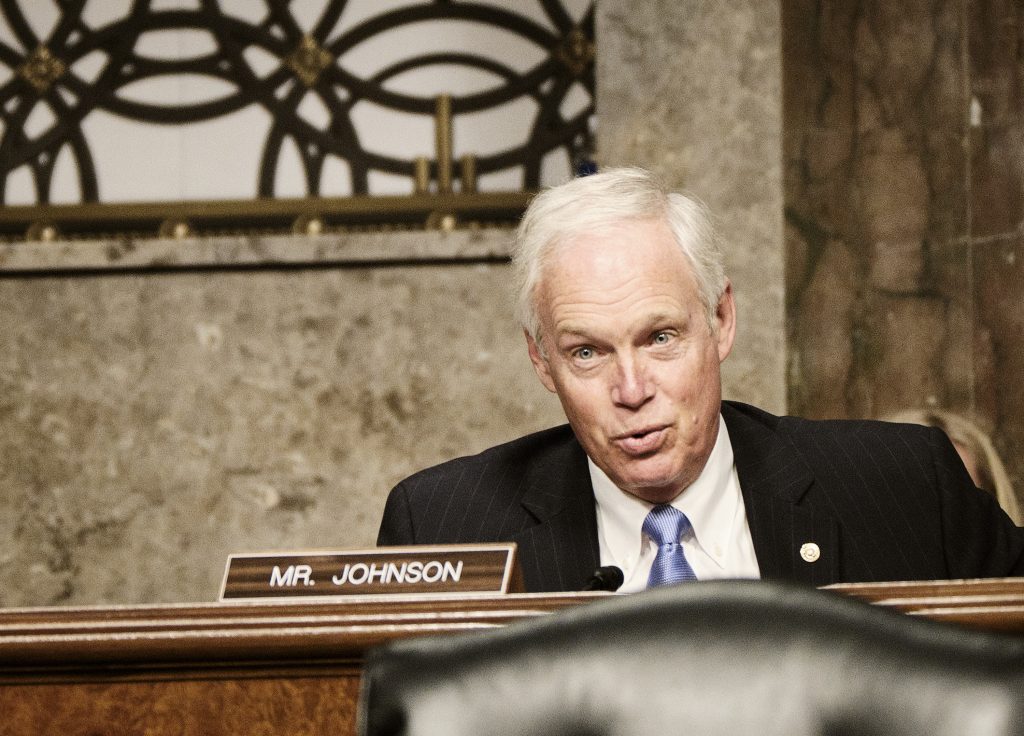 As the Covid-19 virus experiences its second life in the form of the Delta variant, the lion’s share of national attention has focused on how the surge has affected the South. America’s favorite punching bag, Florida, has received special attention. Much of the derision has been well founded: Florida currently has the highest hospitalization rate in the country, and last week, as schools across the state started to reopen at full capacity, Governor Ron DeSantis threatened to withhold pay for teachers who require students to wear face masks in their classrooms.

But the South hasn’t cornered the market on boneheads. Just look at my home state of Wisconsin, which at the worst of times feels like Florida’s pathetic northern cousin who still watches Family Guy religiously and boasts a truly disturbing Funko Pop figurine collection. Roughly 56 percent of Wisconsin residents have received at least one shot, and 52 percent are fully vaccinated. There is no excuse for a state with just six million people to have such an abysmally low vaccination rate. More than 12.8 million Florida residents have gotten at least one shot, compared to 3.3 million Wisconsin residents. Which is to say, Florida still has almost twice as many vaccinated residents as Wisconsin has people.

Why is Covid so bad in Wisconsin, a state that once upon a time prided itself on its good governance and generally informed citizenry? Who exactly is responsible for the virus’s initial spread and subsequent resurgence in Wisconsin? The answer will surprise you about as much as the monster reveal at the end of a Scooby-Doo episode. (Unlike in a typical outing of the cartoon investigators, the proprietors of this haunted hotel don’t feel the need to wear a mask.)

In many ways, the state has become a laboratory for the broader counter-majoritarian agenda that the GOP hopes to roll out nationwide—from intense partisan gerrymandering and voter suppression to the tactical erosion of executive power as soon as a Democrat assumes office. Over the past decade, Wisconsin Republicans have made it as difficult as possible for the state’s voters to righteously defenestrate them from office. To make matters worse, the right-wing judiciary has shown itself to be more than willing to countenance these power grabs.

Like alewives washing up on the shores of Lake Michigan in midsummer, the rot is everywhere, and it is stinky. Wisconsin Senator Ron Johnson recently tweeted his praise for noted Covid conspiracy peddler Alex Berenson, calling him a “courageous voice of reason throughout the pandemic.” Representative Glenn Grothman, who waged war against Kwanzaa and Martin Luther King Jr. Day during his time as a state senator, recently refused to tell a reporter if he had received the vaccine. “I don’t like to get into taking sides on it, OK?” he said before walking away. Republican state lawmakers plan to block the University of Wisconsin system from implementing rules that would stem the virus’s spread on campus. Go Badgers!

The madness is only just beginning. Earlier this summer, Wisconsin Assembly Speaker Robin Vos tasked Michael Gableman—a former state Supreme Court justice who has accused elections officials of stealing Republican votes in 2020—with overseeing a taxpayer-funded inquiry into the state’s presidential election. Last week, Gableman, state Representative Timothy Ramthun, and state Elections Commissioner Bob Spindell all traveled to South Dakota to attend a conspiracy-theory-laden conference on election fraud hosted by Mike Lindell, the MyPillow CEO and friend of Donald Trump. It’s worth remembering that Wisconsin taxpayers are footing the bill for all of these brave acts of public service.

Shameless gerrymandering and voting restrictions starting with Scott Walker’s disastrous governorship have only made matters worse here. Wisconsin must finalize its maps for congressional districts and state legislative districts by July 2022. In June, Republicans in the state Assembly passed a measure that would push back the drawing of new maps for local races until 2023 at the earliest.

As I wrote in these pages last fall, the erosion of democracy in Wisconsin didn’t happen all at once. Rather, it’s been a decade-long war of attrition waged by conservatives, bankrolled by the Kochs and Rickettses of the world, run by a playbook lifted directly from groups like the American Legislative Exchange Council, and carried out with excruciating discipline and attention—with voters eagerly lining up to be used as cannon fodder to take down the Communist transgender critical race theorists who are brainwashing their grandchildren as we speak. (These voters are invariably named Debbie or Jim.)

Some organizations are standing up to the Debbies and Jims of the world. Milwaukee’s annual music festival, Summerfest, touts itself as the largest music festival in the United States. This week, festival organizers announced they would require attendees to be vaccinated or have a negative Covid test. You don’t have to look further than the Summerfest Facebook page to get a taste of aggrieved white Wisconsinites who believe it’s their constitutional right to drink four $12 White Claws and harass teenage girls at a Twenty One Pilots show. “Communist BS,” one Facebook user commented on Summerfest’s page in reaction to the news. “Hope this is the end for Summerfest,” said another.

“Yeah, not attending this year with the family,” a user named Gary Sorensen commented. “Loss of revenue 3 people x 4 days, food, drink, parking, concert, etc. Shove your vax mandate where the sun does not smile.” Three minutes later, Gary decided to post to the Summerfest Facebook page a second time to demonstrate just how not angry/actually laughing he was: “WHAT A JOKE! Watch you go broke while you sit there woke.”

An unfortunate fact of living in America is that no matter where you reside, there will always be a near-critical mass of douchebags. But there are also people doing heroic work in solidarity with their neighbors to stave off this virus and offer relief. In Milwaukee, where my husband and I live, organizations like Black Leaders Organizing for Communities and Ayuda Mutua MKE went to work while the state did little to protect vulnerable communities. As the vaccine became available, Milwaukee pharmacist Hashim Zaibak hired additional staff to help residents navigate the state’s confusing web portal for Covid vaccines and testing.

Milwaukee chef Caitlin Cullen, along with the staff of her restaurant, Tandem, distributed 115,000 free meals throughout the pandemic. Cullen now plans to give away her restaurant, which is paid off and fully furnished. In April 2020, Sherman Park resident Emma Toth started a small community fridge. Over the course of the pandemic, the community turned Toth’s lone refrigerator into a free bodega where neighbors can share fresh produce along with pantry staples, ready-to-eat meals, and other goods. And the local charity Community Advocates has distributed $10.8 million in rental assistance to 3,700 Milwaukee County households since March.

But many Wisconsinites’ needs still aren’t being met, and GOP state lawmakers in Madison have only made our lives worse. Did I mention they turned down $1 billion in federal funds to expand Medicaid? In the middle of a pandemic?

If anything is going to get better here, then Wisconsin Democrats must learn to play hardball. If Wisconsin Governor Tony Evers and Milwaukee Mayor Tom Barrett need an example of actual leadership to emulate, they need look no further than Milwaukee County Executive David Crowley, the first Black official to hold the position. Last month, Crowley launched a six-month Right to Counsel pilot program that would provide free legal representation to Milwaukee residents facing eviction or foreclosure. The program, which will use federal stimulus funds and $1.5 million from United Way, is expected to take effect in September.

Evers recently flexed his own anemic power, vetoing six Republican-sponsored bills that would have put limits on absentee voting. For the past two years, conservative lawmakers and state Supreme Court justices have effectively bullied Evers into submission. In May 2020, the Wisconsin Supreme Court struck down his stay-at-home order. The four conservative justices responsible for the ruling—Patience Roggensack, Rebecca Bradley, Daniel Kelly, and Annette Ziegler—should be publicly berated until the end of their days for this absolutely damning moral failure.

This is a personal issue for me. I have multiple relatives who refuse to get vaccinated, no matter how many CDC infographics my mom emails them or how many times I try to explain why I won’t be attending their barbecue. It’s beyond frustrating, and it’s impossible to know what could possibly change their minds at this point beyond the death of someone close to them. I fear that many white Wisconsinites have already pledged themselves to a very American form of fatalism. “I haven’t died yet,” the thinking goes, “so it can’t be that bad.” (This argument is somewhat harder to make while gasping for breath after your lungs have turned into sponges.)

The outlook may be bleak, but since I’m a stubborn Midwestern Pollyanna at heart, I’ll keep digging glints of hope out of the bargain bin of despair. A recent Marquette University poll found that just 35 percent of Wisconsin voters view Ron Johnson favorably, compared to 42 percent who view him unfavorably, though Johnson hasn’t announced whether he plans to seek reelection in 2022. And Wisconsin is set to redraw its legislative and congressional maps this fall—though the decision will likely be decided by a protracted legal battle waged by private attorneys hired by Republican lawmakers, at taxpayers’ expense, to maintain the GOP’s chokehold on the democratic process. Your state isn’t immune to this. Wisconsin’s fate could soon be your fate, too.