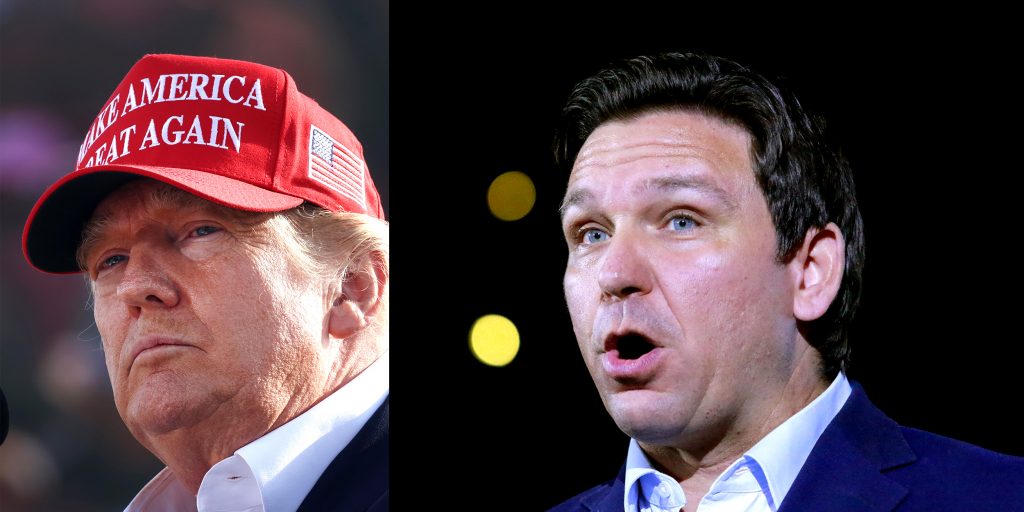 A new University of New Hampshire Granite State poll shows Florida Gov. Ron DeSantis neck-and-neck with former President Donald Trump among likely Republican presidential primary voters in New Hampshire, with DeSantis receiving the support of 39% of respondents and Trump 37%. The 2% gap falls within the poll’s margin of error, which means they’re effectively tied. It’s a massive leap for DeSantis, who was trailing Trump 18% to 43% in the same poll in October.

Of course, one poll so far out from any 2024 Republican presidential primary is not an actual preview of how the critical New Hampshire primary is actually likely to play out. But DeSantis’ surge does provide some insights into the direction of the party, and the waning likelihood that the GOP primary involves a major challenge to Trumpism.

If you look under the hood with this poll, there are some revealing findings about the wind behind DeSantis’ sails. When broken down by media consumption, Fox News viewers and conservative radio listeners favored DeSantis over Trump by a bigger margin than overall, roughly 15 percentage points.

As New York Magazine’s Jonathan Chait argues, there’s likely a causal relationship between partisan right-wing media consumption and affinity for DeSantis. Right-wing media, from The National Review to the New York Post to independent media operations that have generally favored Trump, have either covered DeSantis sympathetically or actively lobbied for him as a replacement for Trump in recent months.

DeSantis has also showed an aptitude for courting ultra-wealthy Republican donors, the kind of elites who can help shape the future invisible primary — the process by which party elites, activists and mega-donors can rally behind a candidate and influence voter choice and media coverage before primaries even begin.

Just because DeSantis is looking strong in the polls now doesn’t mean that he’ll continue to hold that position. Trump’s potential return to Twitter — should Tesla CEO Elon Musk successfully complete his purchase of the platform — could provide a huge boost to his salience in news media and right-wing culture wars. And DeSantis might not be able to command the same kind of support when it comes to actually holding campaign rallies and debating, activities where Trump excels. We’re still very, very far out — typically the more overt presidential politicking begins after the midterm elections.

An anti-Trump candidate in the Republican primary race seems like an increasing long shot.

But regardless of what happens with Trump versus DeSantis, another political reality also seems to be emerging: an anti-Trump candidate in the Republican primary race seems like an increasing long shot. DeSantis embodies Trumpism in a more stable, disciplined form, and he is Trump’s only serious competitor at the moment.

In the New Hampshire poll, nobody else came close to either of them. Former Vice President Mike Pence was at 8%, former South Carolina and U.N. ambassador Nikki Haley was at 6%, and South Dakota Gov. Kristi Noem, former Secretary of State Mike Pompeo, and Sen. Ted Cruz of Texas all came in at 1%. While all of these potential 2024 contenders have demonstrated significant, if not total, sympathy for Trump-style conservatism, it’s notable that politicians like Pence and Haley, who have made at least a handful of meaningful departures from Trump, are so far behind they pose no real threat to the former president. For now it looks like Trumpism is set to prevail in the 2024 race — in one form or another.

Zeeshan Aleem is a writer and editor for MSNBC Daily. Previously, he worked at Vox, HuffPost and Politico, and he has also been published in The New York Times, The Atlantic, The Nation and elsewhere.