Which SEC team is most likely to upset Alabama: Texas A&M, LSU or Ole Miss? 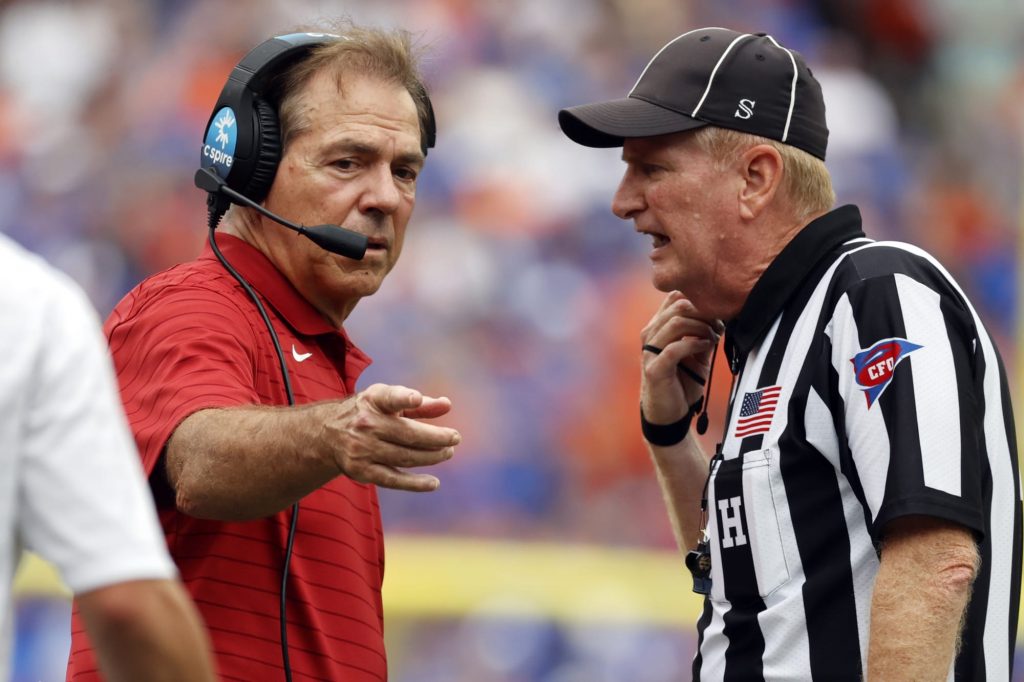 Alabama could suffer its first loss of the season to SEC West rivals Texas A&M, LSU or Ole Miss.

Even though the Alabama Crimson Tide should be the top team in the AP Top 25 poll until proven otherwise, they looked certainly beatable after how they almost were upset by the Florida Gators down in Gainesville in Week 3.

It was a two-point victory for Nick Saban’s team, but this does not look to be the same juggernaut Crimson Tide squad we saw a year ago. This is what happens when you lose so much talent to the NFL Draft in one offseason. Can Alabama still repeat as national champions? Absolutely, but this does not feel like a team that will go a perfect 15-0 in the process. They may drop an SEC game.

So if Alabama is going to lose a game before presumably facing Georgia in Atlanta, who delivers the crushing blow? Will it be to the Texas A&M Aggies, LSU Tigers, Ole Miss Rebels or somebody else?

The Crimson Tide still have to play all six of their divisional foes, as well as cross-divisional rival Tennessee. While the Vols, Arkansas, Auburn and Mississippi State would love nothing more than to hand Alabama a big, fat L, these feel like extreme dark horses to do so. All four programs have head coaches who are either in their first or second years on the job. That will be tough sledding.

Though Texas A&M is the highest-ranked team left on Alabama’s remaining schedule, the Aggies have not been as impressive as other teams in the country inside of the top 10. While they were able to avoid being upset by Colorado in Denver, the Aggies’ quarterback situation is a tad too up in the air to bank on them beating Alabama at Kyle Field in three weeks.

While LSU did beat Alabama the last time these bitter rivals played in Bryant-Denny, that 2019 Tigers team was an all-time squad. Max Johnson is a promising quarterback, but he is not Joe Borrow. Moreover, Ed Orgeron is not being propped up by an elite coaching staff that prominently featured Dave Aranda and Joe Brady like it did two years ago. LSU is not a threat to beat Alabama.

And we have arrived at the Ole Miss Rebels, the team with the best chance to roll the Tide in SEC play. Though no disciple has ever beaten the mentor, Lane Kiffin’s No. 13 Ole Miss team has an elite passing offense, headlined by the early Heisman Trophy frontrunner in quarterback Matt Corral. Historically, Ole Miss has given Saban trouble, and the Rebels are going to be a problem.

What killed Ole Miss in Kiffin’s first year in Oxford was two-fold: The defense was abysmal and the offense lived to turn the football over. While Ole Miss will not have a defense comparable to Georgia, it is now middle of the pack in the FBS and no longer scraping along at rock bottom. As far as the turnovers are concerned, Corral has cleaned that up in his game. He may be a first-rounder.

Ultimately, Ole Miss has the ability to beat Alabama in a good, old-fashioned shootout. That is what will be required to defeat the Crimson Tide at this stage of the season. While the game is in Tuscaloosa in two weeks, Ole Miss should not view Bryant-Denny as going into the Death Star. Though they may only be a New Year’s Six team at season’s end, they are No. 13 for a reason.

It would not be shocking if Kiffin is the first Saban disciple to beat his mentor.