What We Need to Learn from the Tragedy in Surfside 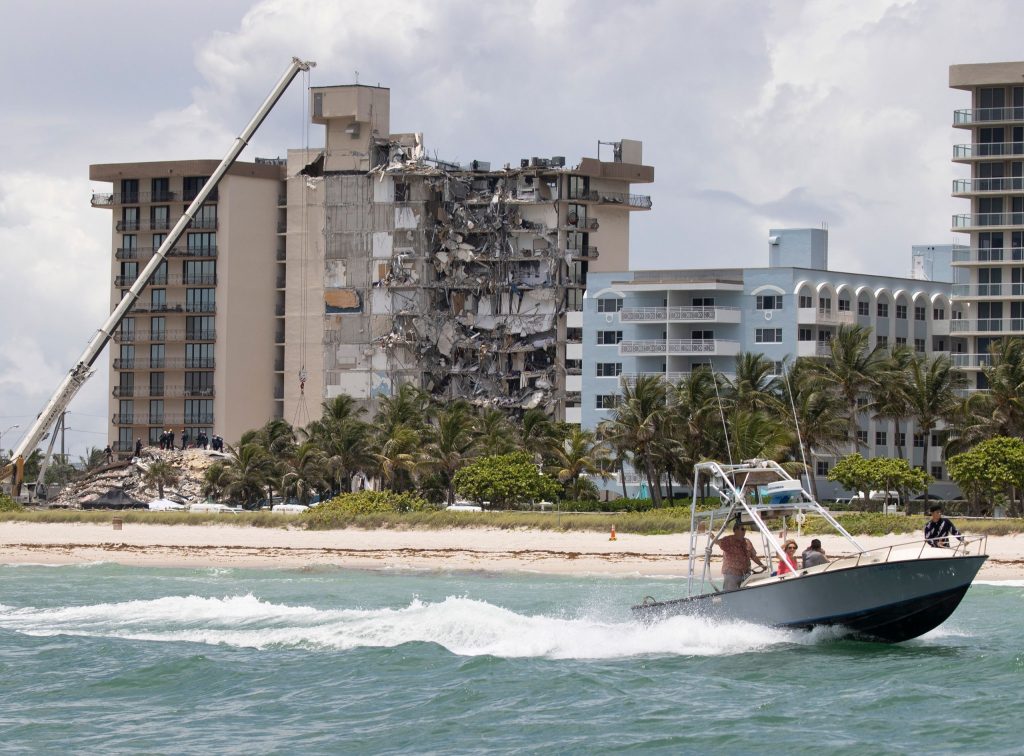 Sara Nir was in her ground-floor apartment in Champlain Towers South, in Surfside, Florida, at around 1 a.m. on June 24th when, as she told CNN, she heard loud knocking noises. She went outside to report them to a security guard, and, as they were talking, they saw a crater open up in a parking area and an adjacent pool deck, above an underground garage. She rushed back to her apartment, where her son and her daughter were, and told them, “Run as fast, as much as you can!” They made it out; many of their neighbors did not. A week later, eighteen bodies had been recovered. A hundred and forty-five people were still missing.

Nir’s story is one of luck, split-second choices, and human drama. But accounts like hers are being scrutinized for clues about the cause of the disaster, because, so far, all that the experts can offer is questions. Did the structural failure begin in the garage, as the crater might suggest? Were support columns compromised, or the foundation, perhaps by nearby construction? Was the problem in the ground itself? A study of satellite data from the nineteen-nineties, published last year and co-authored by a Florida International University professor, happened to include Champlain Towers South. It found evidence of “subsidence”: the thirteen-story condominium complex, which was built in 1981, had been sinking at a rate of one to three millimetres a year. Yet that, in Florida, is not very remarkable. (Other parts of the state have extensive sinkhole problems.) In many ways, Champlain Towers appears to have been much like any number of buildings in the state, which is what makes the determination of what warnings there were of the catastrophe—and what larger warning they may represent—feel so urgent. When the rescue operation was just starting, Charles Burkett, the mayor of Surfside, which is in Miami-Dade County, told CBS News, “Buildings like this don’t fall down in America.” His words, with their implicit appeal to the nation’s exceptionalism, sounded almost plaintive.

The witness accounts stretched back to before the collapse. A contractor told the Miami Herald that he’d come to look at the area under the pool just two days earlier, and had seen corroded rebar and cracks in the concrete, as well as standing water. A building employee had told him, he said, that the building pumped out so much water that the pump motors had to be replaced every two years. (A maintenance supervisor who worked there in the late nineties remembered seawater coming in. He told CBS Miami, “The pumps never could keep up.”) A 2018 engineering report, commissioned ahead of the building’s required forty-year recertification process, found “major structural damage” under the pool-deck area. This April, the condominium-association president sent a letter to residents noting that, in the two and a half years since the report was issued, the situation had become “significantly worse.”

What is most striking about the letter, though, is the association president’s insistence that none of it should have been news to the residents—the issues, she wrote, had been “discussed, debated, and argued for years.” (That claim will likely be contested in court; several surviving residents have already filed lawsuits.) All that was left to address was a fifteen-million-dollar assessment to pay for the needed repairs. “A lot of this work could have been done or planned for in years gone by,” she wrote. “But this is where we are now.”

Reading the report today, one might wonder why residents stayed. But, a month after the association members received it, a town inspector told them that the building was “in very good shape.” That judgment may say more about construction in Florida than about the integrity of Champlain Towers South; decades into a statewide population boom, standards are uneven and poorly enforced, with gaps for older construction. Building codes in South Florida were tightened after Hurricane Andrew destroyed tens of thousands of homes, in 1992, but hardly enough. The Saturday after the collapse, Daniella Levine Cava, the mayor of Miami-Dade County, announced an “emergency audit” of residential buildings that are forty or more years old in her jurisdiction. The audit identified four hundred and sixty-nine multifamily buildings that are of particular safety concern. Twenty-four of those buildings are at least four stories high; two are eighteen stories high. Two are public-housing complexes.

It is also possible that South Florida, where climate change is an especially serious challenge, is nearing a point at which even the best-constructed buildings are under threat. Intense hurricanes have become more frequent; there were fears last week that search-and-rescue efforts in Surfside might collide with storm preparations. Miami, a coastal city built on porous limestone, is beset not only by rising sea levels but also by water seeping in from below. Ron DeSantis, Florida’s Republican governor, has begun to talk about building for “resilience,” but he seems to be spending more energy trying to stay on Donald Trump’s good side and banning critical race theory in public schools. On the whole, G.O.P. leaders have resisted taking real steps to counter climate change—and many still deny that the problem even exists.

The effects of climate change are not confined to Florida—wildfire season is under way in California, and temperatures have reached record levels in the Northwest—and neither is infrastructure decay. In March, the American Society of Civil Engineers issued its quadrennial report on the state of the country’s infrastructure, and gave it a C-minus. The A.S.C.E. found more than forty-six thousand “structurally deficient” bridges and noted that the power grid is struggling to keep up with extreme-weather events. Last Thursday, in Surfside, President Biden, while thanking the first responders, told them, “Your brothers and sisters across this country are having more pressure put on them,” and cited the heat and the acute need for firefighters in the West.

We don’t know why this building fell down, but we know that others will. The nation has received many engineering reports outlining the severe risks we face. And yet, despite a tentative deal on a $1.2-trillion infrastructure package, Republicans are fighting a second installment—which would, crucially, do more to connect the priorities of infrastructure and climate—as if it were an onerous condo assessment. The cost of the needed repairs is high. But this is where we are now. ♦