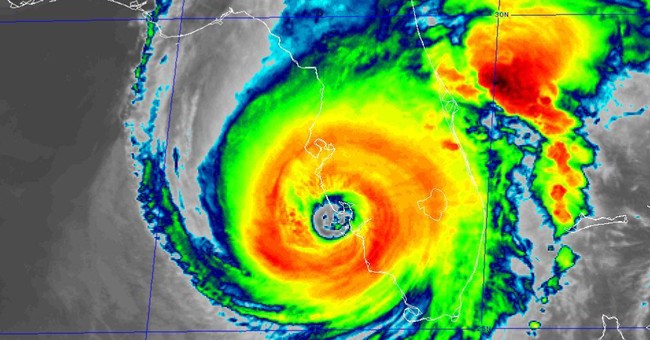 We’ve been writing about Hurricane Ian bearing down on Florida and now we’re seeing some videos of how bad it’s getting down there.

As we reported earlier, a camera from The Weather Channel in Ft. Myers, Florida, was completely submerged underwater despite it being positioned six-feet high.

That was happening all over the area, as the water from the storm surge flooded in. It’s up to the roofs in some areas of Fort Myers and Fort Myers Beach. It reminds me of pictures of tsunamis. Let’s hope that people got out of there because reports are that it’s wild there.

*RARE* first person view of storm surge. This camera is 6 feet off the ground on Estero Blvd in Fort Myers Beach, FL. Not sure how much longer it keeps working. You’ll see it live only on ⁦@weatherchannel⁩ #Ian pic.twitter.com/WwHtvgVxjY

Here’s a video of the eyewall making it’s way onshore now. This is @lanikairesort off Estero Blvd on Fort Myers Beach #HurricaneIan pic.twitter.com/URthVR8M3c

The Naples firefighters might be busy if you call them for help, they’re busy rescuing their gear from their firehouse.

Fortunately for this cat, he had a boyfriend to save him.

Taylor Wirtz of WINK News said it looked like the Titanic inside their hotel in Naples.

Water creeping up to the first floor our our hotel. Looks like the inside of the Titanic. Cars are fully underwater #Ian pic.twitter.com/kp1v73bgf6

Gulf Shore Boulevard on Vanderbilt beach looks like an ocean. Cars are slamming up against buildings. #Ian pic.twitter.com/N7c41jh0uI

The Sunken Gardens in St. Petersburg gathered their flamingoes and brought them inside to keep them safe in the bathroom.

🦩🌀We’re hunkered down! Our animals are safe w/staff on site to see them through the storm.
The flamingos are having a hurricane party in the bathroom; eating, drinking, & dancing. 😉

Stay safe out there! pic.twitter.com/ejCuuRUdma

This is the power from the water allegedly flooding in, in Naples.

This is the stuff of nightmares https://t.co/Q5P6hDbEkH

The man who took the picture reportedly lost his shoes but was otherwise okay, according to his wife.

Time-lapse of the storm surge coming in.

I’ve been capturing video from this webcam in Fort Myers all day and I’ve put it into a Timelapse. Check out the storm surge rushing in! Crazy. #Ian #flwx pic.twitter.com/lj7a1wThga

Houses coming off their foundations in Fort Myers Beach and people swimming in their basements.

Houses are wiped off their foundations and seen floating down streets in Fort Myers Beach as storm surge from Hurricane #Ian moves in.

DO NOT DO THIS. You don’t know what may be in this water, including chemicals! pic.twitter.com/PeFfCpLklx

Some of media was spreading a picture of a shark, seemingly finally excited that the old fake meme might be true, but others debunked that saying the index on the video indicated it was from 2010.

After over half a decade of debunking this hoax every time there was a flood or hurricane, I can’t believe I’m looking at an honest-to-god street shark.

Perhaps one of the craziest but true aspects was as the water was surging in, in places like Naples, it was being sucked out in other places like Tampa.

Video from Matt Tilman of Bayshore Blvd in Tampa. The bay being sucked out. #hurricaneian #ian pic.twitter.com/F54Lv1r5KV

But just like with a tsunami, don’t stay there to look around because it’s going to be coming back in.

Stay safe, people, this is crazy.