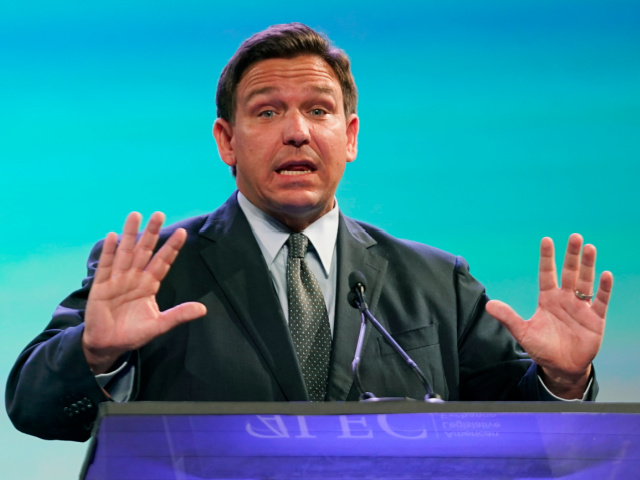 Florida Gov. Ron DeSantis (R) on Wednesday dismantled the criticism from President Joe Biden he received earlier in the week about the rise of Chinese coronavirus cases in the Sunshine state.

“Biden has taken to himself to try and single out Florida over COVID [Chinese coronavirus],” Desantis explained.

However, he quickly followed up by saying Joe Biden ran for president on a platform of “He was going to shut down the virus.” Instead, Biden “has imported more virus from around the world by having a wide-open southern border.”

Under Biden, there have been “hundreds of thousands of people pouring across every month, and it’s not just from Mexico,” DeSantis said, noting that the border crossers are “rarely from Mexico, you have over 100 different countries, where people are pouring through — not only are they letting them though — but they’re then farming them out all across our communities all across this country.”

After coming into the United States illegally, he added, these people are being put on planes and buses by the government and not worrying about the Chinese coronavirus. “Who knows what new variants are out there,” DeSantis said, but “whatever variants are around the world, they’re coming across that southern border.” So, DeSantis clarified that Biden “isn’t shutting down the virus; he’s helping to facilitate it in the country.”

DeSantis asked what Biden has against Florida, since he wants to force children in kindergarten to wear masks in school. He said Biden “doesn’t believe parents should have a say in that, [Biden] thinks that should be a decision for the government.” The governor then said that, in Florida, parents would be the ones that choose if their children will be wearing masks in school.

“We said from the beginning we’re going to make it available for all, but we’re not going to mandate it on anybody. That’s ultimately an individual’s choice to be able to do it,” DeSantis said, torching Biden for wanting to mandate the vaccine for everyone. The governor also touted the dramatic decline in the mortality rate amongst seniors due to his “seniors first strategy.”

“Give me a break … the question is we either have a free society, or we can have a biomedical security state,” DeSantis said, while taking a stab at Biden and the far-left for wanting to mandate a vaccine passport showing your vaccination status when going to places like the store and the gym while claiming it is too much of a burden to have voter IDs. He added:

[In Florida] we’re a free state, people are going to be free to choose, to make their own decision about themselves, about their families, about their kid’s education, and about putting food on the table, and Joe Biden suggests that if you don’t do lock down policies then you should “get out of the way.” But let me tell you this, if you’re coming after rights of parents in Florida, I’m standing in your way. I’m not going to let you get away with it.

“Why don’t you do your job? Why don’t you get this border secure, and until you do that, I don’t want to hear a blip about Covid from you,” he said, speaking directly to Biden.