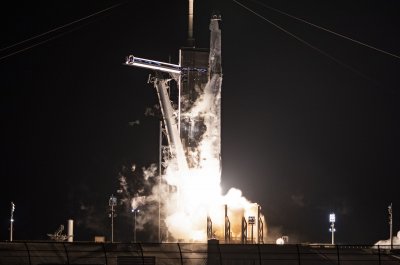 ORLANDO, Fla., Nov. 11 (UPI) — Four astronauts on the SpaceX Crew-3 mission entered the International Space Station on Thursday night about one day after being launched from Florida.

“I can’t tell you how happy I am to see these smiling faces,” Vande Hei said after the new crew arrived. “All seven of us are friends, and we’re going to become even better friends as time goes on. And we’ve got a lot of work to do.”

The capsule made contact with the space station at 6:32 p.m. EST, which was about 38 minutes earlier than NASA’s original mission schedule for the maneuver. The hatches between the station and the dragon were opened at 7:25 p.m. EST, and the new crew entered minutes later.

“Lots of smiles and thumbs up, an exciting moment,” a NASA announcer said. Chari, Barron and Maurer received pins upon arrival signifying their first trips to space.

The new arrivals are expected to spend six months on board performing science experiments, spacewalks and space station maintenance.

Earlier during the mission, crew members reported conditions inside the capsule were good.

“So far we’ve just been hanging out in the cabin,” Barron said of the crew’s actions Thursday morning. “Tom is our only veteran, and the rest of us are rookies, so we’ve been trying to get our space legs.”

Crew members took photos of the Earth and watched as the hatch window of the capsule gave them a view of the moon.

“One of the most delightful things about being in space is eating,” he said. “Everybody’s been feeling really good and enjoying eating.”

Marshburn said NASA encourages some playtime with food because it helps the crew understand and demonstrate microgravity. The plush toy turtle was on board as part of a NASA tradition to have a zero-gravity indicator, usually a small toy, that begins floating as the crew arrives in space.

“We’ve already had some target practice with macadamia nuts and so far I’d say we’ve been fairly successful,” he joked.

Such experiments include multiple studies of astronaut health during long periods in space, plant growth without soil in microgravity and a demonstration of sensors that could help flying robots navigate spaceships like the orbiting laboratory.