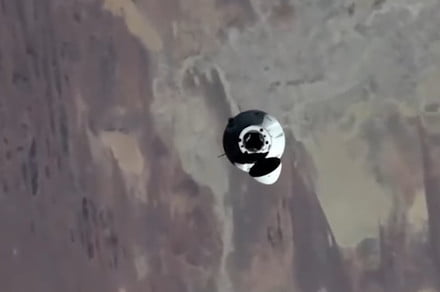 SpaceX’s Crew-3 astronauts have arrived safely at the International Space Station (ISS) following a 10-hour rocket and spacecraft ride from the Kennedy Space Center in Florida.

A couple of hours later the crew entered the ISS through the hatch and greeted the station’s current inhabitants, NASA’s Mark Vande Hei along with Roscosmos’ Anton Shkaplerov and Pyotr Dubrov.

First up, an awesome view of the spacecraft with Earth far below, captured by a camera on the space station:

Crew-3 checks in after catching sight of the @space_station ahead of docking, now targeted for 6:33 p.m. EST pic.twitter.com/Po532uBhc4

An amazing view of the Crew Dragon as it nears the ISS:

The view from the Crew Dragon looking toward the space station’s docking ring, captured moments before the spacecraft and the ISS linked together:

View looking the 'other way', from @SpaceX #CrewDragon of the @Space_Station and docking ring, at a distance of 5 m. pic.twitter.com/xtigUaxZCO

The Crew-3 astronauts celebrate as the Crew Dragon docks with the space station:

A couple of hours later, with all of the safety checks and pressurization procedures complete, the astronauts floated into the International Space Station:

Four new astronauts through the hatch and seven crewmembers total on the @Space_Station!

After almost exactly a day from launch, #Crew3 is aboard the orbiting laboratory. pic.twitter.com/QJoBUsJcsj

SpaceX’s Crew-3 mission, operated in partnership with NASA, is the third operational flight of a Crew Dragon spacecraft and the fourth crewed orbital flight following the first one using the SpaceX vehicle last summer. This mission also takes the number of people visiting space to more than 600, with ESA’s Matthias Maurer officially the 600th person to achieve the feat. Three of the four Crew-3 astronauts are in space for the first time, with only Tom Marshburn having been before.