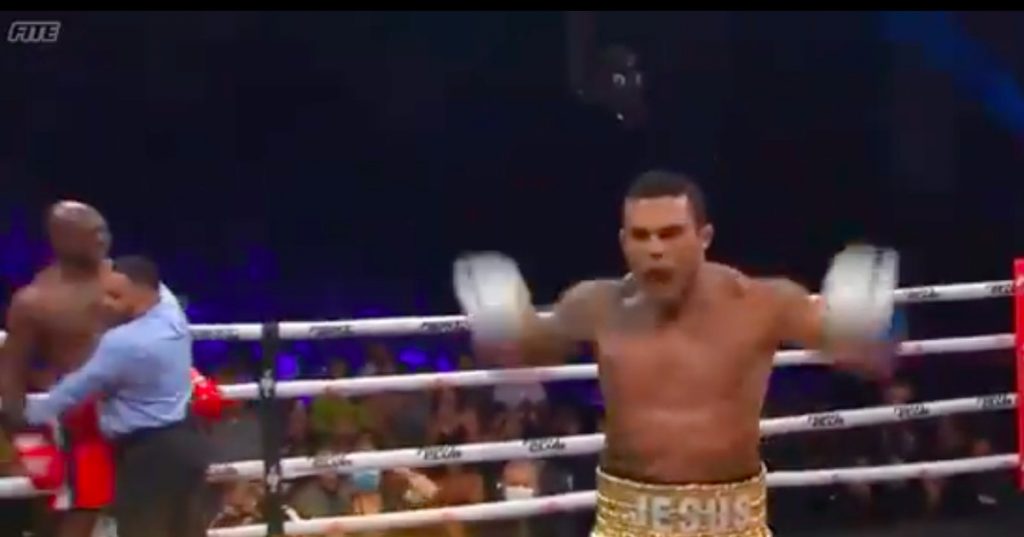 Watch Vitor Belfort vs. Evander Holyfield full fight video highlights from their clash above, courtesy of FITE TV and other outlets.

For more on Belfort vs. Holyfield, check out the live blog by MMA Fighting’s Shaun Al-Shatti.

Round 1: It’s still utterly bizarre that this fight is happening, for a lot of reasons, but here it is so buckle up, folks. The Brazilian national anthem starts us off. Michael Buffer then asks for a 10-count moment of silence to commemorate September 11th, but it lasts literally less than two seconds before some woman in the crowd yells some obscenity at someone and sets off a hullabaloo. Good lord. Florida never fails to disappoint. Now it’s time for “The Star-Spangled Banner,” and some young boy just comes up here and CRUSHES it. My goodness. Well done, young man. And here’s a “We love Trump!” chant. Vitor Belfort is being a good sport but he clearly doesn’t want to do this pre-fight interview. Samuel Burgos is our referee. Here comes Belfort making that walk. This will be his professional boxing debut. And now it’s Holyfield making that walk. He’s 58 years old but seemingly in pretty damn good shape, at least physically. Cage Rage gets a shoutout on the broadcast as one of Belfort’s past accolades. And we’re off. Holyfield paws out a few jabs. Holyfield charges inside with a three-punch combination that misses. Belfort goes upstairs with a left hand. Belfort swarms! He misses but Holyfield slips through the ropes. That was not a good sign of things to come. The fight resets and Belfort tags him with a left followed by an uppercut! Down goes Holyfield! Standing eight count for Holyfield. We’re back, and Belfort pours it on. He’s swarming with punches! Burgos has seen enough. The referee stops it. Holyfield isn’t happy, but it’s hard to argue with that stoppage given the circumstances. That felt gross to watch.