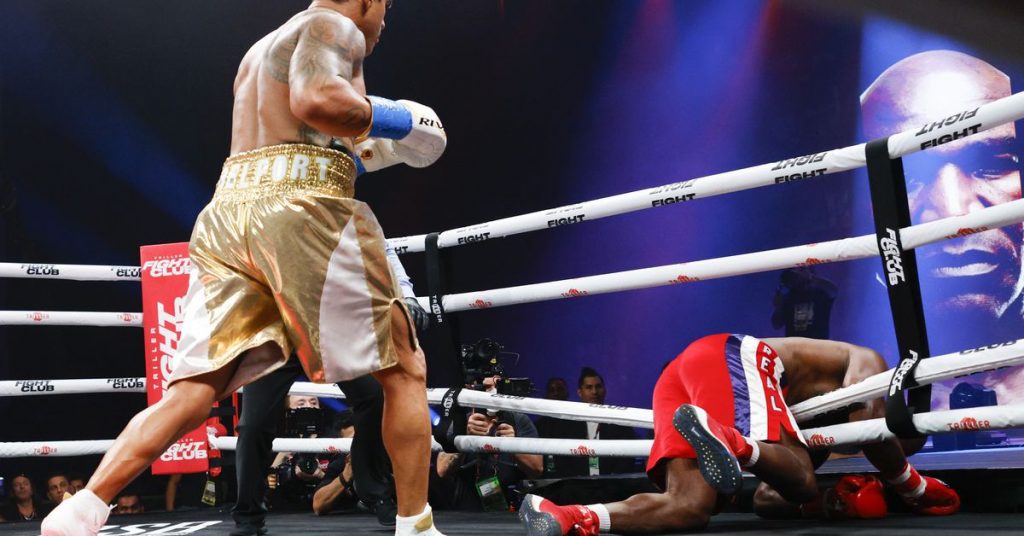 Former UFC light heavyweight champ Vitor Belfort stopped a clearly diminished Evander Holyfield via TKO in the first round of the Triller Fight Club boxing headliner on Saturday in Florida.

Belfort then continued his pursuit of former Triller headliner and Showtime boxing star Jake Paul, using his post-fight speech to cut a promo that even his promoters got in on.

The official time of stoppage was the 1:49 mark of the first round as the referee stepped in to save Holyfield, whose marked size advantage was nullified by an inability to withstand any significant punches. Belfort sent Holyfield to the canvas once with an uppercut before a flurry of punches had him reeling across the canvas.

Belfort immediately celebrated his victory while Holyfield appeared to protest the decision. Later, as Belfort gave his post-fight celebration speed, he denied he was hurt and said he wasn’t out of the fight, which had been scheduled for eight two-minute rounds in the heavyweight boxing division.

During his official post-fight interview, the usually mild-mannered Belfort was uncharacteristically crass toward Paul, whom he previously accused of ducking a fight.

Triller CEO Ryan Kavanagh subsequently stepped into the ring and offered a $30 million winner take all boxing match between Belfort and Paul on the Saturday of Thanksgiving weekend.

The 14 years separating Belfort, 44, and Holyfield, 58, was immediately apparent in Belfort’s speed advantage. The movement on display from the former cruiserweight and heavyweight boxing champion during a media day wasn’t enhanced much by the energy of fight night as his jab slowly flicked out. As soon as Belfort started to throw serious punches, Holyfield, who hadn’t boxed since 2011, was rattled as uppercuts and left hooks slammed into his guard.

When Holyfield uncorked his own power shot, a left hook, he sent himself to the canvas on a clean whiff. Before long, Belfort pressed the action again and started to let his left hand go, and the latest celebrity boxing headliner, a second choice after Belfort’s originally scheduled opponent, Oscar De La Hoya, contracted COVID-19, was mercifully over at the Seminole Hard Rock Hotel and Casino in Fort Lauderdale, Fla.