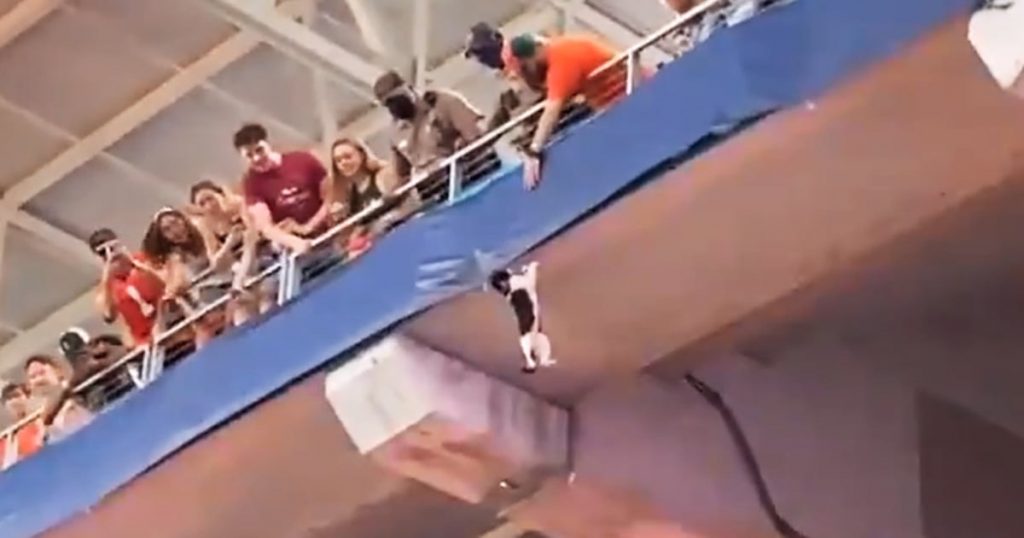 The biggest play at the University of Miami-Appalachian State University football game Saturday night happened in the stands, where spectators banded together to save a feline fan.

Video from Hard Rock Stadium in Miami Gardens showed the cat dangling from an upper deck, where it apparently clung by its claws to some type of fabric on the railing. At least one person reached down to help, but the cat plummeted to the seats below.

Thankfully, the careening kitty was caught by fans who held a U.S. flag as a makeshift rescue tarp.

The flag belonged to season ticket holder Craig Cromer and his wife, Kimberly, NBC Miami reported. Cromer, a University of Miami facilities manager, told the station that he and his wife untied the flag from the railing when they saw the cat clinging above them.

“They were trying to grab it from above and they couldn’t reach it, but they were scaring it downward,” Cromer said. “It hung there for a little while with its two front paws, then one paw, then I was like, ‘Oh, my goodness, it’s coming soon.'”

Multiple videos were shared online, showing a stadium full of fans riveted by the ordeal. Cheers erupted once the cat appeared to be safely rescued, and Miami went on to win the game.