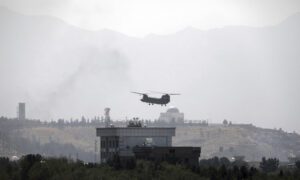 Billy Vaughn of Florida is hesitant to say whether the war in Afghanistan was worth it or not, believing it’s not for him to pass judgment.

All the Gold Star father knows for certain is that his son, Aaron, died in that far-away conflict 10 years ago almost to the day, at the tender age of 30.

Each year, the family struggles with their loss.

“It’s always a difficult day,” Vaughn told The Epoch Times. “He was about as humble a boy as there ever could be.

“At the same time, he was a fierce protector and a fierce defender against injustice.”

Aaron was a proud member of Navy SEAL Team Six, who believed in the sacred trinity of flag, family, and faith.

In the end, “he gave up his life for that flag,” his father said.

Vaughn lost his son when his U.S. Army helicopter exploded over the Tangi Valley in Afghanistan on Aug. 6, 2011, killing all 30 aboard. It was the largest loss-of-life incident in the Afghanistan war.

Vaughn said that if his son were alive today, he’d be “sickened” by the sight of the Taliban takeover of Afghanistan after thousands of U.S. service members died defending the country against tyranny.

“I’ve never seen such a tragedy unfold in my lifetime,” Vaughn said. “It’s really inexplicable to describe in my mind how badly the Biden administration has handled [the crisis]. There is no reason for us to flee like dogs with our tails between our legs.”

At best, Vaughn sees it as a “replay on steroids” of the failed Middle East policy of the Obama–Biden administration.

“He [Biden] is full of insults for everybody else,” Vaughn said. “You just can’t hardly believe that people are that stupid. It makes you wonder if it wasn’t done on purpose.

“We lost a boy over there. What I will say is this: These men and women who fought and died did what they did because they loved this country and they wanted to help the people of Afghanistan. If my son were alive today, he’d do it all over again,” he added.

At VFW Post 1709 in Flagstaff, Arizona, former U.S. Marine Cpl. Gabriel Winse said he served two tours in Iraq, in 2005 and 2009, and lost friends and fellow soldiers in Afghanistan.

He questioned the leadership that led to the humiliating takeover of the country by the Taliban.

“I don’t know if [the war] was worth it,” Winse told The Epoch Times. “Honestly, I really don’t know. They told me it was a waste of time—all my buddies that are over there.

“My biggest thing is the families that have lost a father, son, or daughter,” he said.

He said U.S. service members either died for a cause, “or they died for nothing.”

Dr. Tony Brooks, a former member of the elite 75th Army Ranger Regiment who lives in Washington, served in Afghanistan in 2005 and in Iraq from 2006 to 2007 in support of the global war on terror.

He now questions whether any of it was worth it.

After watching the tragedy in Afghanistan unfold on television, “I’ve experienced literally every emotion during the past week,” he said—from happiness that U.S. troops will soon be coming home, to sadness and disappointment over the terrible fate of the Afghan people who believe in democracy.

At the same time, 10,000 Americans are waiting to be evacuated at Kabul International Airport in Afghanistan’s capital, he said.

“I know what this means. I know where this is going,” Brooks told The Epoch Times. “I went over there to fight. I don’t know what it was for at this point. It feels very much like a complete failure—Vietnam 2.0.”

In terms of lives and treasure lost, Brooks is appalled that nearly 2,450 U.S. service members have died and $2 trillion has been spent in the 20-year conflict in Afghanistan.

“I did not risk my life to watch women in Afghanistan turned into slaves. They will suffer the greatest setback in women’s rights that we’ve seen in our lifetime. We finally have women in Afghanistan that are adults who have lived under a regime where they’ve had rights. Now, the Taliban is taking those rights and enslaving them,” Brooks said.

Brooks is the author of “Leave No Man Behind: The Untold Story of the Rangers’ Unrelenting Search for Marcus Luttrell, the Navy SEAL Lone Survivor in Afghanistan.”

In the aftermath of the Taliban conquest of Afghanistan, Brooks said he doesn’t support a return of U.S. troops to the country.

“I think the answer is no. It’s too late. To put people in the lion’s den again—that is not OK. I don’t think the government has a clue.”

Allan Stein is an Epoch Times reporter who covers the state of Arizona.