Valerie Loureda reflects on first loss: ‘She’s not better than me’ 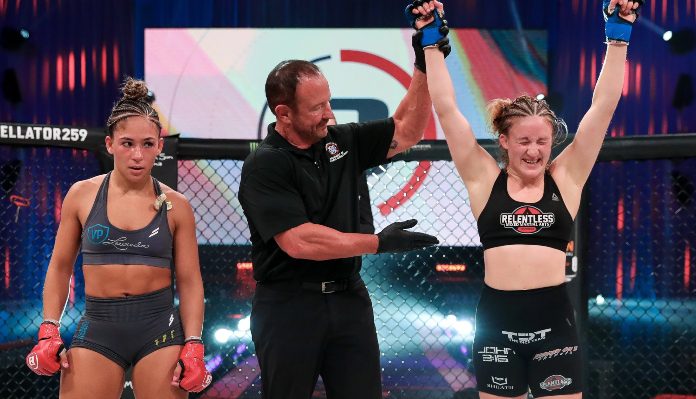 Valerie Loureda looks to rebound off her first career defeat this Friday at Bellator 271 in Hollywood, Florida.

Previously 3-0 to kick off her MMA career as part of the Bellator flyweight roster, Loureda ran into Hannah Guy this Summer at Bellator 259 in May. As a result, Guy bested “The Master” via split decision.

“I chose to develop on a platform where everybody’s going to watch me turn into a mixed martial artist in front of their eyes so I did this to myself,” Loureda told Giancarlo Aulino. “My last fight was not a proper representation of the fighter I am although I showed a lot of heart and it was a fun fight to watch. She’s not better than me and I’m looking forward to a rematch of that fight in the future.

“That fight taught me a lot about myself and my camp and the things I need to change and people around me I had to get rid of. So I did the proper adjustments to make this fight happen and I’m just looking forward to going in there and just having fun on Friday and being myself.”

Valerie Loureda returns on the preliminary portion of this weekend’s Bellator 271 event when facing Taylor Turner (5-7, 1-1 in Bellator). As for Mississippi’s Guy, this past Saturday she earned a 22-second TKO stoppage over Ivana Coleman at Summit FC.