Valedictorian With Nonspeaking Autism Delivers Moving Graduation Speech, ‘God Gave You a Voice. Use It’ 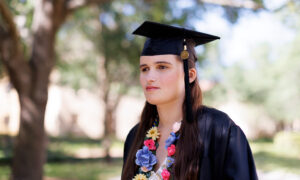 A Florida college valedictorian with nonspeaking autism has given a moving commencement speech to her fellow graduates, urging them to use their voices to serve others.

Rollins College student Elizabeth Bonker lost her ability to speak at 15 months of age, and is profoundly affected by autism. For her commencement address that was delivered to her graduating class of 529 students on May 8, she used text-to-speech computer software, typing independently with one finger as a communication partner held a keyboard.

Footage of the speech has since gone viral.

“I am one of the lucky few nonspeaking autistics who have been taught to type,” Elizabeth, who earned a degree in social innovation, told the gathered crowd. “That one critical intervention unlocked my mind from its silent cage, enabling me to communicate and to be educated, like my hero Helen Keller.”

While Elizabeth’s neuromotor issues prevent her from tying her shoes or buttoning a shirt without help, technology has allowed her to share her message.

“God gave you a voice. Use it,” she urged the crowd, quipping, “and no, the irony of a nonspeaking autistic encouraging you to use your voice is not lost on me.”

In her speech, Elizabeth recalled how, during her freshman year, she heard a story about the famous Rollins alum “Mister” Fred Rogers, and a handwritten note found in his wallet after he died, which read, “Life is for Service.” She called upon her classmates to write the same message on a corner of their commencement program, take a photo and post it on social media, or tear it off and keep it in a safe place.

“When we see each other at our reunions, we can talk about how our commencement notes reminded us to serve others,” she implored.

Elizabeth also mentioned that, despite struggling her whole life with not being heard or accepted, she believes that one of the greatest gifts is having “the freedom to choose our own way.”

Crediting Rollins for fostering a culture of kindness, Elizabeth also thanked the college for “taking a chance” on her.

“A story on the front page of our local newspaper reported how the principal at my high school told a staff member, ‘The retard can’t be valedictorian,’” she shared, adding, “Yet today, here I stand. Each day, I choose to celebrate small victories, and today, I am celebrating a big victory with all of you.”

After graduating, Elizabeth plans to use her experience to help the world’s 31 million nonspeakers with autism locked in their own “silent cage.” To help her with her mission, she has already set up her own nonprofit, Communication 4 ALL, through which she plans to promote access to communication tools for everyone.

She also implored her fellow graduates to identify their own dreams, and use their Rollins education to fulfill those missions.

Founded in 1885, Rollins College at Winter Park is one of Florida’s oldest colleges. In a press release, college representatives said that Elizabeth was elected to give the 2022 commencement address unanimously, by four additional valedictorians—Emily Curran, Sofia Frasz, Jessika Linnemeyer, and Charles Mellin—all of whom achieved a perfect 4.0 GPA.

Elizabeth is also using her voice in many ways to help change the way the world sees nonspeaking autism. She has written a book, “I Am in Here: the Journey of a Child with Autism Who Cannot Speak but Finds her Voice,” and has produced an album of songs. In her music video, she and 60 nonspeakers declare their anthem, “I Am in Here.”

Guitarist Tom Morello, of Rage Against the Machine fame, guest stars on the album’s second song, “Silent Cage.” This song transports listeners into what it feels like for nonspeakers to suffer in silence.

Having found her voice, Elizabeth now wants the world’s voiceless to be able to follow in her footsteps.

Watch Elizabeth’s May 8 commencement address in the video:

Share your stories with us at emg.inspired@epochtimes.com, and continue to get your daily dose of inspiration by signing up for the Inspired newsletter at TheEpochTimes.com/newsletter