Up early with Rick Scott, the GOP’s Senate campaign chief 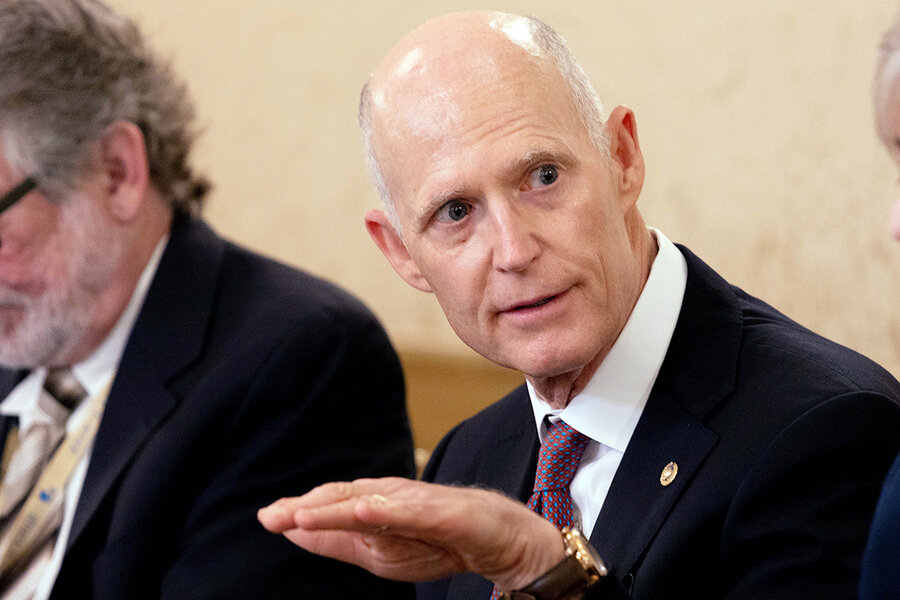 Florida Sen. Rick Scott sat down with reporters at a Monitor Breakfast, where we talked Mitch McConnell, Donald Trump, and how in America, ‘you can be anything.’

Florida Senator Rick Scott speaks at the St. Regis Hotel on June 22, 2022, in Washington, D.C. Mr. Scott was there to talk to reporters as part of The Christian Science Monitor’s longstanding breakfast series.

Sen. Rick Scott is known as an “early to bed, early to rise” kind of guy. He’s up between 4:00 and 5:00 a.m., and then works out, according to his staff. So when we lined up a Monitor Breakfast for June 22 with the Florida Republican, chair of his party’s Senate campaign committee, the request to start extra early – 7:30 a.m. – came as no surprise.

I’ll admit I was a bit nervous. Would journalists, famous for keeping late hours, be ready that early to grill Senator Scott on his plan for a GOP takeover of the Senate in the November midterms? Turns out there was nothing to worry about. A few reporters even arrived early, as did Mr. Scott – of course!

Soon enough, the larger picture became clear. At the top, Mr. Scott spoke of being born to a single mom in public housing, and how she told him, “Thank God you live in the United States of America, because you can be anything. And I believed her.”

The senator described service in the Navy – swabbing decks, cleaning latrines – and then a career in business, beginning with a donut shop, and eventually as CEO of a major hospital chain. The theme of hard work, and rejecting government assistance, came up over and over.

“My mom would never, ever have allowed us to say, ‘Oh, let me see if there’s another government program I can go on rather than go and get a job,’” Mr. Scott said.

My article on the breakfast covered the senator’s emphasis on work, after recasting his controversial proposal that even the poorest Americans pay income tax. Mr. Scott also made headlines when he declined to endorse Republican Senate leader Mitch McConnell for majority leader, if the party does take over the chamber.

And he spoke of his relationship with another “Florida man,” former President Donald Trump. They talk “every two to three weeks,” Mr. Scott said. He has no idea if Mr. Trump will run for president again – “he doesn’t ask me” – but, the senator adds, “you have to assume he’s going to run.”

The C-SPAN video of the breakfast can be viewed here.

At the stroke of 8:30 a.m., as promised, our breakfast ended, and Mr. Scott was on his way to his next appointment – no doubt early. Because, as the saying goes, “If you’re early, you’re on time, and if you’re on time, you’re late.”

Monitor journalism changes lives because we open that too-small box that most people think they live in. We believe news can and should expand a sense of identity and possibility beyond narrow conventional expectations.

Our work isn’t possible without your support.

About a year ago, I happened upon this statement about the Monitor in the Harvard Business Review – under the charming heading of “do things that don’t interest you”:

“Many things that end up” being meaningful, writes social scientist Joseph Grenny, “have come from conference workshops, articles, or online videos that began as a chore and ended with an insight. My work in Kenya, for example, was heavily influenced by a Christian Science Monitor article I had forced myself to read 10 years earlier. Sometimes, we call things ‘boring’ simply because they lie outside the box we are currently in.”

If you were to come up with a punchline to a joke about the Monitor, that would probably be it. We’re seen as being global, fair, insightful, and perhaps a bit too earnest. We’re the bran muffin of journalism.

But you know what? We change lives. And I’m going to argue that we change lives precisely because we force open that too-small box that most human beings think they live in.

The Monitor is a peculiar little publication that’s hard for the world to figure out. We’re run by a church, but we’re not only for church members and we’re not about converting people. We’re known as being fair even as the world becomes as polarized as at any time since the newspaper’s founding in 1908.

We have a mission beyond circulation, we want to bridge divides. We’re about kicking down the door of thought everywhere and saying, “You are bigger and more capable than you realize. And we can prove it.”

If you’re looking for bran muffin journalism, you can subscribe to the Monitor for $15. You’ll get the Monitor Weekly magazine, the Monitor Daily email, and unlimited access to CSMonitor.com.

Read this article in