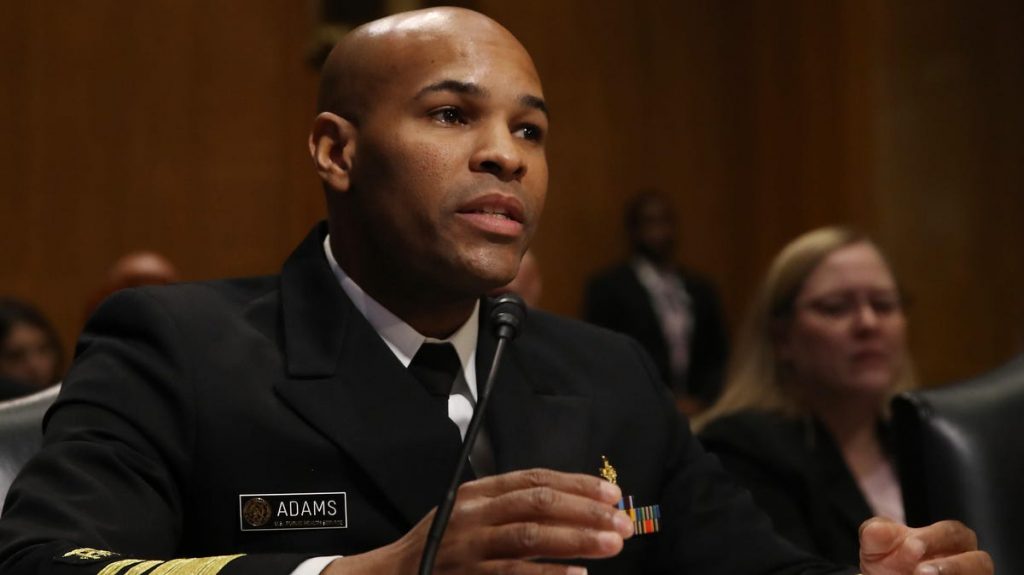 Dr. Jerome Adams, the U.S. Surgeon General under former President Trump, on Tuesday joined the growing chorus of public health officials criticizing Republican-led states that have enacted bans prohibiting school districts from imposing their own mask mandates, even as some—including Florida and Texas—battle surges in Covid-19 hospitalizations including among children.

Republican governors should not “tie the hands of schools and public health officials,”  Adams, the country’s top doctor from 2017 to 2021, told CBS “This Morning.”

Specifically asked about Florida, where hospitalizations are soaring, including among children, Adams labeled the actions of Gov. Ron DeSantis (R) “unconscionable,” adding he is particularly bothered “as a father” to see the Republican governor crusade against mask-wearing for kids.

“As a physician, as a public health expert, it’s deeply troubling that it seems we’re letting politics get in the way of protecting our youth,” said the ex-Surgeon General.

Adams stressed school districts should be able to make their own decisions based on the “tools” public health officials are recommending, and appealed to parents to encourage vaccination for their children over 12 years old.

Republican governors like Florida’s Ron DeSantis and Texas’ Greg Abbott have characterized their mandate bans as a way of protecting personal freedoms. “Governor Abbott has been clear that we must rely on personal responsibility, not government mandates,” an Abbott spokesperson said Monday. “Every Texan has a right to choose for themselves and their children whether they will wear masks, open their businesses, or get vaccinated.”

Adams’ criticism of states blocking these mandates came as top infectious disease official Dr. Anthony Fauci said Tuesday state and local governments should be imposing vaccine requirements for teachers given how “serious” the delta outbreak has become. “I’m sorry, I mean I know people must like to have their individual freedom and not be told to do something, but I think we’re in such a serious situation now, that under certain circumstances, mandates should be done,” Fauci said during an interview with MSNBC.

At least seven states—Florida, Texas, Arizona, South Carolina, Utah, Iowa and Oklahoma—have legally prohibited schools from imposing mask mandates, as their Republican leadership rails against new coronavirus restrictions. These rules, either enacted through state law or governors’ executive orders, have already stoked a litany of lawsuits filed against several states’ bans and widespread criticism, including among some Republicans. In Arkansas, where Gov. Asa Hutchinson has already said he regretted signing a mask mandate ban into law, a state court issued a preliminary injunction temporarily invalidating the state-wide ban while the case moves forward.

Efforts to ban mandates have also spread to the national stage, with a group of GOP senators, including Ted Cruz (R-Texas) and Kevin Cramer (R-N.D.), on Monday proposing long-shot bills aimed at banning mask and vaccine mandates.