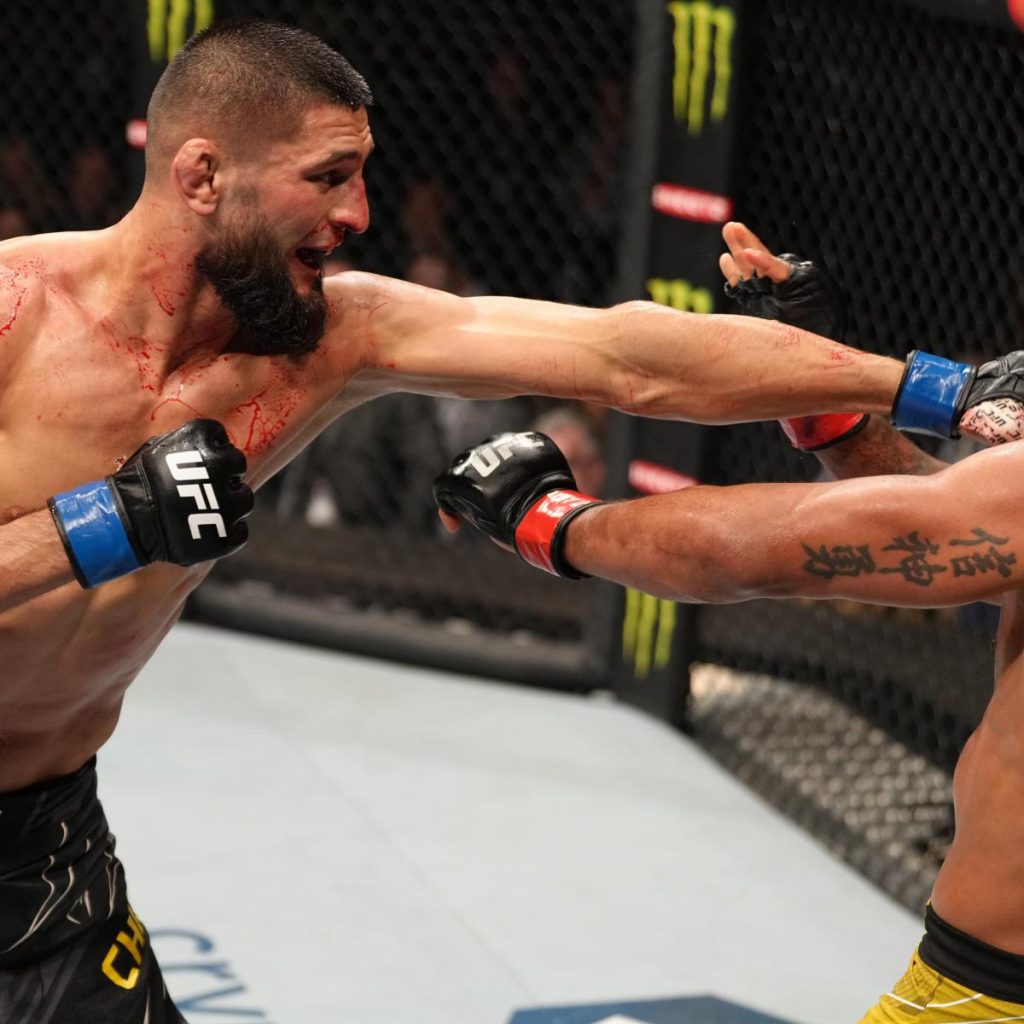 Volkanovski finished the night on a strong note. He was absolutely dominant in his third title defense. “The Korean Zombie” Chan Sung Jung lived up to his name by absorbing a ton of punishment, but the cumulative effect was too much even for him.

The Australian’s speed and power were simply too much for the challenger. Whether he was leading the dance or countering Jung’s offense, he held the advantage in nearly every exchange.

Ultimately, referee Herb Dean had to save Zombie from himself. He called the fight after Volkanovski landed four devastating punches in a row.

It was another bullet point on Volkanovski’s resume as the best featherweight of all time.

Elsewhere on the card, Chimaev proved himself as an elite welterweight and Sterling solidified his status as a UFC champion. Here’s a look at what all went down in Jacksonville.

Aljamain Sterling took home the bantamweight strap and plenty of validation by winning his long-awaited rematch with Petr Yan.

While Sterling had to face the criticism of winning a championship belt by disqualification after the first fight, he was able to defend his championship with a more traditional decision victory.

Sterling’s ability to takedown Yan and get into advantageous positions was his biggest edge in the fight. His second- and third-round performances were his strongest in the fight. The vast majority of the round consisted of Sterling attempting rear-naked chokes and Yan fighting them off.

This bout certainly opened the door for a trilogy, but it’s likely the division will get to move on from the matchup as Sterling utilized his post-fight interview to call out T.J. Dillashaw.

Khamzat Chimaev remained undefeated at UFC 273, but it certainly wasn’t as easy as his previous appearances in the UFC.

After Chimaev steamrolled the competition in his first four UFC fights, he found a stiff test against Gilbert Burns. The former title challenger hung tough after a typically quick start for Chimaev. The 27-year-old scored an early takedown, but instead of the usual fight-ending ground-and-pound, he struggled to keep the Brazilian down.

In the second round, we saw Chimaev in trouble for the first time. The two went back and forth, but Burns landed a massive right hand that stung his opponent. Durinho handed the rising star his first losing round.

Chimaev answered any questions about his cardio or heart in the third round. He resorted to a stiff right jab to establish the lead in the crucial round and ultimately earned the decision.

After watching Chimaev run over his first four opponents, this fight provided a much clearer picture of what he can do in the Octagon. He’s among the division’s elite, but he still has work to do.

The strawweight fight between Mackenzie Dern and Tecia Torres had a little bit of everything in a three-round affair that saw Dern sneak out a split-decision win over Torres.

Torres and Dern engaged in a tightly contested first round. Torres had more volume, but Dern’s strikes appeared to do more damage as the two engaged in a boxing match for most of the first five minutes.

That round ended up being important for Torres as Dern clearly won the second round. That’s because the jiu-jitsu ace was aggressive in going for the submission, attempting one of the more wild Kimura attempts imaginable.

She pulled guard and ended up nearly sinking in the submission from a standing position.

That didn’t end up happening as Torres eventually broke the hold, but Dern simply transitioned to submission attempts off of her initial try until the round was nearly over.

The win was impressive for Dern in that she was able to use her grappling effectively while doing enough in the striking department to pick up the win.

Mark O. Madsen might not have made many fans with his fighting style but he secured another win and extended his undefeated record to 12-0 against Vinc Pichel to open the main card.

The first round was a competitive affair with more striking than was expected.

However, the second round was the most difficult for the eventual winner. Pichel outlanded him on the feet and appeared to have turned the tide.

Unfortunately for Pichel, Madsen turned to his Olympic level wrestling in the third and final round to secure the victory. He spent most of the round just maintaining control rather than engaging in a firefight with a dangerous opponent.

That isn’t likely to generate a ton of buzz for Madsen, but he continues to win and get better as he makes his transition from Greco-Roman wrestling to fighting in the UFC.