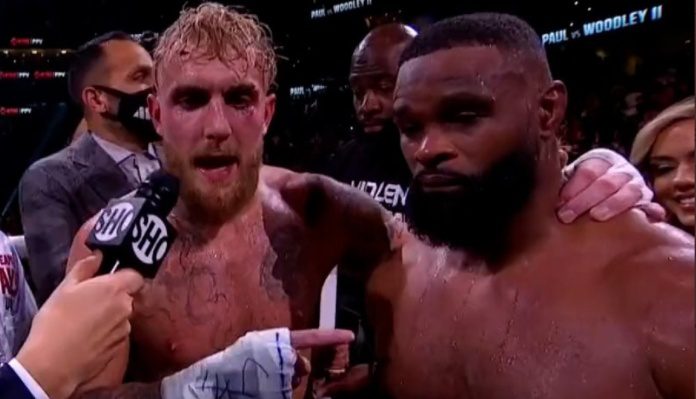 Tyron Woodley (19-7 MMA) and Jake Paul (5-0 Boxing) collided for a second time at the Amalie Arena in Tampa, Florida back on December 18th, 2021 this after their first contest ended in a controversial split decision win for Jake.

‘Paul vs. Woodley 2’ resulted in Jake Paul connecting with a huge right hand in round six that sent Tyron Woodley crashing to the canvas in a state of unconsciousness.

It was a heartbreaking loss for ‘The Chosen One’ and marked his sixth straight loss in combat sports.

Adding to the hurt of the loss were the many MMA fans who scolded Woodley for getting knocked out by Jake Paul.

Tyron Woodley sent a message to his critics during his recent appearance on ‘The MMA Hour‘:

“A lot of people were saying, ‘Aw, you lost to (Jake Paul) again. Aw, you knocked out.’ He would literally f*ck a lot of y’all up, MMA fighters and other people that are just bumping at the gums.”

Had Woodley defeated Paul there was sure to be a trilogy fight, but that was not the case so the likelihood of a ‘Woodley vs Paul 3’ is slim to none.

However, Jake Paul ‘The Problem Child’ shared plans to continue his relationship with ‘T-Wood’ perhaps in a podcast or even a movie:

“People are saying we should do a podcast together. I think it would be funny to do a Buddy-Cop movie together. So, our relationship doesn’t end here.”

Jake Paul is currently taking a short break from boxing before planning to return to the ring this summer.

Meanwhile, Tyron Woodley as well has confirmed he will return to the ring come July 2022.