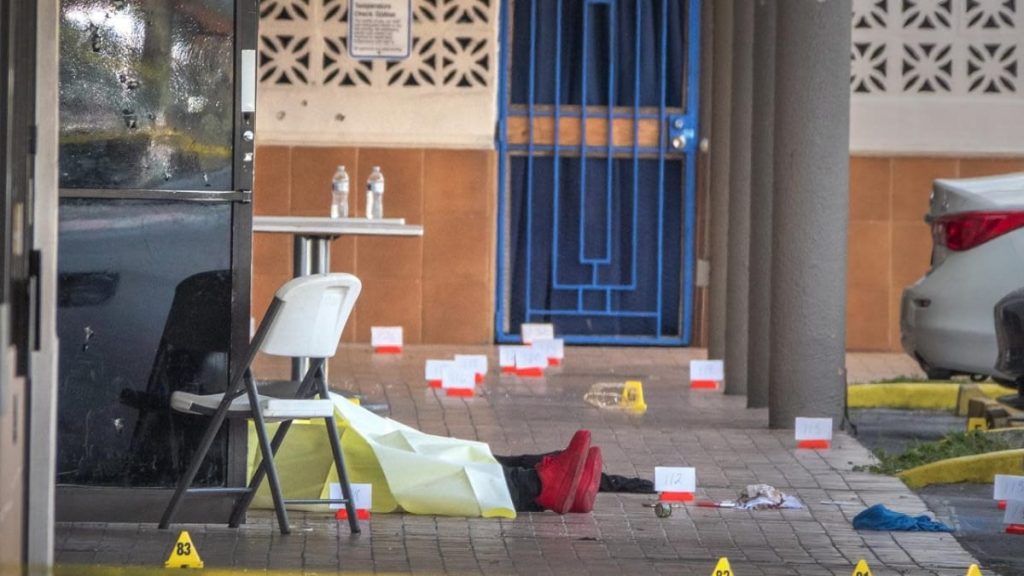 Violence has ushered in the Memorial Day weekend in South Florida, when gunmen indiscriminately sprayed bullets into crowds at two Miami venues.

Two people died and at least 20 others were injured early on Sunday morning during a shooting outside a banquet hall, about a day after a drive-by shooting killed one person and injured six.

Authorities called on the public to help identify the shooters.

“This type of gun violence has to stop. Every weekend it’s the same thing,” said the police director of Miami-Dade County, Alfredo “Freddy” Ramirez III, whose officers were hunting three suspects believed to have been involved in Sunday’s violence.

Two people died at the scene, police said. As many as 25 people went to various hospitals for treatment.

The bodies of two victims were awaiting to be removed from the scene, more than 16 hours after the shots rang out outside the banquet hall, which had been rented out for a concert.

Police said three people got out of an SUV shortly after midnight and opened fire into a crowd with assault rifles and handguns. The shooting was targeted, Ramirez said, but did not elaborate.

Governor Ron DeSantis joined in mourning, saying on Twitter he was “praying for the recovery” of the victims and pledged help from state authorities.

Sunday’s shooting came a little more than a day after a drive-by shooting claimed the life of one person outside another venue in the Wynwood area. Six others were injured.

Some witnesses likened the scene to a “war zone” after a barrage of dozens of bullets sent people scurrying in the night.

Democratic state Senator Shevrin Jones said he wants DeSantis to do more than just pray. He is calling on the governor to sit down with Democrats to discuss meaningful ways of addressing gun violence.

But he acknowledged Republicans were resistant to discuss the issue.

“Republicans don’t want to talk about guns. They think we’re trying to take their guns away from them. If their talking point is that guns are for protection, or that guns are for hunting, just know that that terminology is different in certain communities,” Jones said.