“Trump Was an Inspiration for Me”: Matt Gaetz Tries to Shift the Narrative With a MAGA Romance 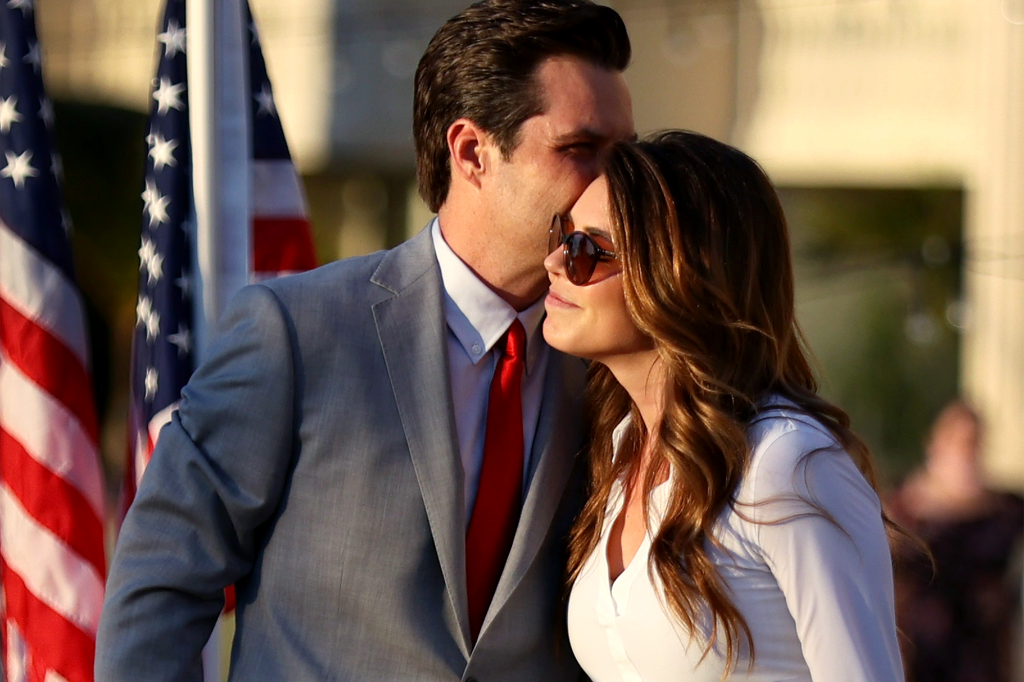 Coming off a sweep through the Midwest that included stops at the Iowa State Fair and a rally in Des Moines with Congresswoman Marjorie Taylor Greene, Matt Gaetz got married. In a quiet ceremony on Catalina Island off the coast of California, Gaetz and Ginger Luckey tied the knot. For a guy who craves the spotlight, the event was uncharacteristically understated. Aside from former Rand Paul staffer Sergio Gor, who took up the dual role of officiant and DJ, and war room hosts Raheem Kassam and Natalie Winters, few political personas were in attendance. Luckey’s brother, Palmer, and his partner, Nicole––who arrived on the former’s decommissioned naval vessel—and Nestor Galban, Gaetz’s adopted son, represented the family. About 30 other friends “from normal life” rounded out the party. Gaetz cooked for the group, serving up a menu of BBQ chicken legs, grilled vegetables, and a watermelon salad.

The elopement was something of a surprise. The couple had previously planned to get married next August—or so they told me on a sticky summer afternoon late last month, when I met the two in the lobby bar of New York City’s Ace Hotel. Amidst a tornado of scandal for the congressman — the behavior he’s been accused of ranges from gross to potentially illegal and includes, but is not limited to, sex trafficking of a minor; sharing nude photos of women with his colleagues on the House floor; taking a sex-fueled jaunt to the Bahamas; and drug use — I was there to meet Luckey and, their hope was, to expand the public understanding of her beyond “that poor girl marrying Matt Gaetz.”

New York City isn’t known as the friendliest territory for Republicans with Gaetz’s level of opprobrium, and he dressed the part when we met. Clad in a casual cotton T-shirt and a baseball cap pulled low, Gaetz hardly fit the part of the bombastic firebrand who rode Donald Trump’s coattails to the upper echelon of MAGAworld—no Fox News bronze or overly coiffed bouffant in sight. But it’s clear that Washington, D.C., is no longer friendly territory either. Just days after our meeting, Gaetz was hounded off during a press conference. “Are you a pedophile?” a woman could be heard repeatedly shouting in videos of the incident. For years Gaetz enjoyed the shelter afforded to a lawmaker who spent most of his time brownnosing the president, but the Biden era has seen him fall under federal investigation.

Gaetz has denied all wrongdoing. He will tell you, emphatically, as he sits at a high-top table at the Ace Hotel, “I have fewer on-record accusers than Joe Biden.” As the investigation continues, he’s taking cues from the former president. “I have seen so much in politics: people distracted, dismayed, disoriented by bad coverage,” he said. “In a way Trump was an inspiration for me because despite whatever they were saying about him—with foreign intelligence services, with the DOJ—he had a determination to say what he was gonna say and share his vision for the country.”

Along for the ride is Luckey, then dressed in bright white jeans and pristine sneakers that have no business on the city streets. A longboard was tucked conspicuously behind her at the table. You see, she grew up in Long Beach, California, a hypercompetitive “tomboy” who enjoyed sailing with Palmer, the wunderkind founder of virtual reality company Oculus VR and famous Facebook exile. She studied economics at U.C. Santa Barbara and captained the school’s sailing team. After graduation she worked for accounting giant PricewaterhouseCoopers before jumping to a smaller outfit. She now works for a 35-person start-up called Apeel, which focuses on extending the longevity of produce using only plant-based materials. The image she projects, like Gaetz’s, comes close to caricature. She was, she said, “a teen mom kind of figure” to younger students on the sailing team: “I was like, There’s nothing more important than getting these kids home at night.”

Luckey was carefully apolitical. She touched on feminism in a way that recalled the former first daughter: “When I found out that the first lady doesn’t…get a paycheck, even when she coordinates a whole team, I was like, Wait a minute…. You’re telling me she isn’t valued at all?” she said at one point. “I was flabbergasted. I was like, We’re America. We’re supposed to set the standard for this, and this is what we’re doing?”

She presented her own form of bipartisanship, one minute noting that the Trump she is closest with is Tiffany (who told Luckey where to get her hair done in D.C.), the next saying she respects Jill Biden because she continues to teach writing at Northern Virginia Community College, even as first lady. Asked whether she’s become more political since slipping a ring on that all-important finger, Luckey responded, “I admire AOC as well as Lauren Boebert. They both speak their mind. They’re both effective in things they want to drive forward. And I think too often, [there’s] so much of this red team, blue team. There’s just gotta be so much more common middle ground.”

Her mother, she said, “does sometimes show her off,” which is how she ended up at Mar-a-Lago one night in March 2020, at Kimberly Guilfoyle’s 51st birthday party, wearing a backless white dress. That’s where she met Gaetz, who, she said, was one of few men present who didn’t touch her lower back: “I remember thinking we had such a good conversation.” Guilfoyle conspired with Gaetz, who was smitten, to seat Luckey next to him at a table dominated by Trump-era celebrities. This was the final year of a presidency whose bit players were inescapable for anyone but a Tibetan monk, yet Luckey insisted she had no idea who her dining companions were. She remembers asking Eric Trump to take a photo of her and Gaetz seated next to each other. She said she asked Tucker Carlson what kind of show he had. When she saw Don Jr., she asked Gaetz, “Who is that man dressed like someone from Duck Dynasty?”

Gaetz has always worked hard to manage his image. Now that he’s under investigation for potential sex trafficking, he wants to discuss his engagement. His description of his meet-cute with Luckey sounded like Cinderella fanfic for the MAGA world—what they referred to multiple times as their “COVID love story.” “For me it was love at first sight,” he said. “For her it took six dates.” Gaetz continued to court Luckey after Guilfoyle’s birthday party, inviting her to the Kentucky Derby as a pretense to continue talking. “Keep in mind I had no tickets, no hotel, no plan. I just thought this was a way to get her back to the East Coast,” he said. “Then the Kentucky Derby gets canceled by COVID, and I am totally off the hook.”

They started seeing each other, and on December 30, after less than a year, Gaetz proposed—at Mar-a-Lago. Before popping the question, Gaetz, cognizant that “you never want to upstage the big guy,” asked Trump for his approval. According to Gaetz, doing a passable Trump impression, the former president said, “You two are a dynamic duo.” When Luckey said yes, Trump sent a bottle of his eponymous Champagne to their table.

As the allegations against Gaetz started piling up, there was speculation that Luckey would break things off. By the time of the engagement, federal agents had already confiscated the congressman’s phone and were digging, particularly into his association with Joel Greenberg, a fellow Florida man and the former Seminole County tax collector who pleaded guilty to a number of crimes, including sex trafficking a 17-year-old, whom he accused Gaetz of having sex with. But now they’re married. “Never Left. Never Leaving,” Luckey posted last month on Twitter with a photo of the couple on a sunset beach walk.