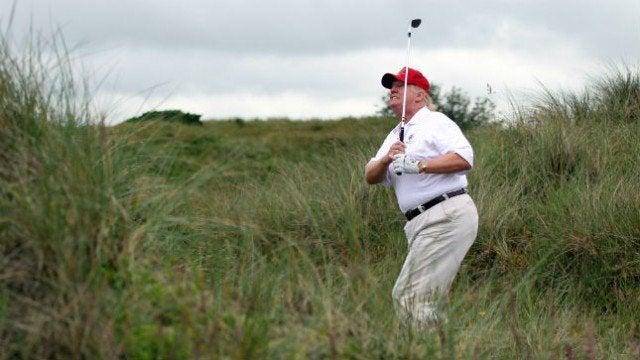 Former President Trump on Monday touted in a statement hitting a hole-in-one while playing at his golf club in West Palm Beach, Fla., on Saturday after some social media users questioned his abilities.

“Trump just made a hole-in-one!” Tim Swain, a Republican running for Senate in South Carolina, captioned a photo posted to Twitter over the weekend. The photo showed Trump celebrating on the green with Hall of Fame golfer Ernie Els, Gene Sauers, Ken Duke and Mike Goodes.

Several commenters on the tweet cast doubt on the claim, prompting Trump to defend his accomplishment, saying it was “100% true.”

“Many people are asking, so I’ll give it to you now, it is 100% true,” Trump wrote in the statement late Monday, which included a video of Trump walking to the hole.

Despite there being a “rather strong wind,” the ball “bounced twice and then went clank, into the hole” at the seventh hole, scoring him a hole-in-one, Trump said.

“These great tour players noticed it before I did because their eyes are slightly better, but on that one hole only, their swings weren’t,” he said.

According to the Trump International Golf Club website, the seventh hole involves a water element that guards the front and right side of the par-3 hole.

Trump ended his statement by saying he wouldn’t disclose who won the game.

“I won’t tell you who won because I am a very modest individual, and you will then say I was bragging-and I don’t like people who brag!” he said.