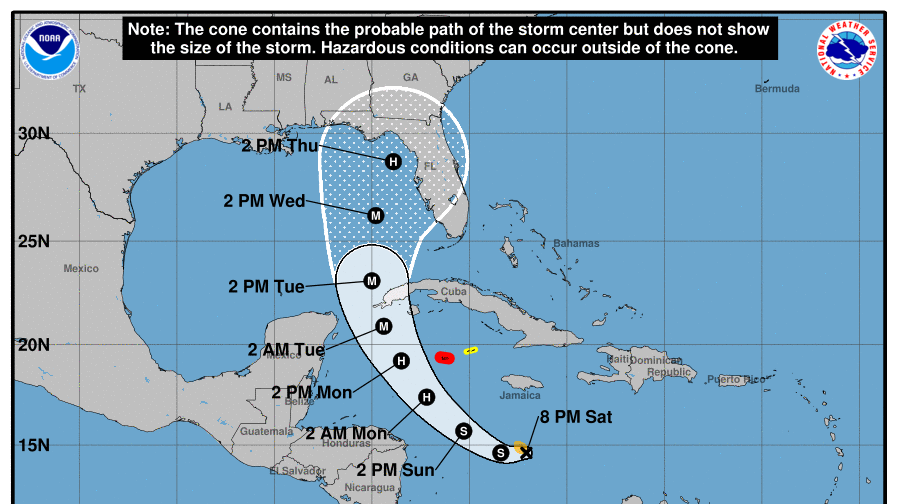 An image from the National Oceanic and Atmospheric Administration shows the projected path of Tropical Storm Ian.

An image from the National Oceanic and Atmospheric Administration shows the projected path of Tropical Storm Ian.

Officials in the Caribbean and Florida are warning residents to prepare for the arrival of Tropical Storm Ian, an intensifying storm that’s expected to grow into a hurricane over the weekend, with Florida’s governor declaring a state of emergency for the entire state on Saturday.

The weather system currently churning south of Jamaica was declared a tropical storm Friday night and is projected to hit populated areas with heavy rains and high winds starting Sunday.

A number of hurricane shelters were open on the Cayman Islands, and Premier Wayne Panton told residents to expect heavy rainfall, flooding and potential power outages.

“I ask that you remain calm. Preparation and caution are key to remaining safe,” Panton said in a statement. “Please conclude your preparations as quickly as possible and plan to be safely sheltered by Sunday afternoon.”

A storm surge could also cause coastal water levels on the Cayman Islands to rise 2 to 4 feet above typical tide heights.

The storm will reach Florida in a few days

The tropical storm is then expected to pass over to near western Cuba late Monday before continuing north over the Florida Keys and the peninsula. NASA on Saturday announced a delay in its planned launch of the Artemis 1 uncrewed moon mission, which had been set for Tuesday, because of the approaching storm.

The National Weather Service said there was “increasing confidence” that Ian would produce life-threatening conditions in Cuba and parts of Florida, including storm surge, hurricane-force winds and rainfall flooding.

Up to 12 inches of rain could fall in some areas, with flash flooding and mudslides possible in Jamaica and Cuba.

Florida Gov. Ron DeSantis declared a state of emergency for 24 counties in Florida on Friday and expanded it to the entire state on Saturday — putting the Florida National Guard on standby and also requesting a federal pre-landfall emergency declaration.

“This storm has the potential to strengthen into a major hurricane and we encourage all Floridians to make their preparations,” DeSantis said in a statement. “We are coordinating with all state and local government partners to track potential impacts of this storm.”

President Biden declared an emergency in the state on Saturday, authorizing the Federal Emergency Management Agency to coordinate relief efforts.