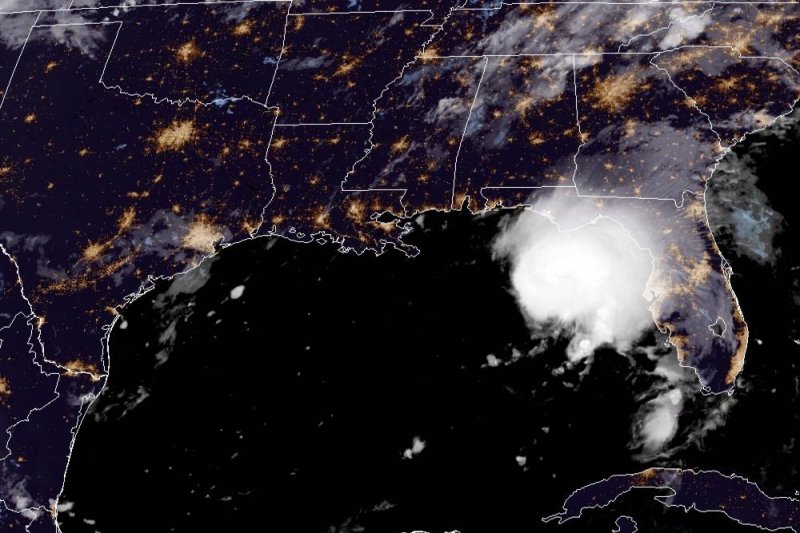 Tropical Storm Fred is seen in the Gulf of Mexico early Monday as it approaches the western Florida Panhandle. Image courtesy NOAA/NHC

Aug. 16 (UPI) — Tropical Storm Fred is moving toward the Florida Panhandle and is expected to bring heavy rainfall and dangerous storm surge to the region before it arrives over land, forecasters said Monday.

In its 1 p.m. CDT update, the National Hurricane Center said the storm had maximum sustained winds of 65 mph and was located 35 miles southwest of Apalachicola. It was moving northwest at 9 mph.

The NHC said in its update that Fred was producing heavy rainfall and that dangerous storm surge is expected along the coast of the western Florida Panhandle and Big Bend area.

The storm brought tropical storm conditions to the Dominican Republic and Haiti and Cuba last week before weakening to a tropical depression after passing over the island of Hispaniola. It regained tropical storm strength Sunday.

A tropical storm warning is in effect for the coast of the Florida Panhandle from Navarre to the Wakulla/Jefferson County line.

“On the forecast track, the center of Fred should move across the northeastern Gulf of Mexico today, and make landfall in the Florida Panhandle this afternoon or early evening,” the NHC said in its update Monday.

Further east in the Atlantic Ocean, Tropical Storm Grace formed early Saturday and is also forecast to move toward the Gulf Coast. It is expected to arrive there Wednesday or Thursday. Also in the Atlantic basin is Tropical Depression Eight, which is also forecast to become a tropical storm in the coming days. For the moment, it is expected to remain at sea.

Fred follows five other named storms in the Atlantic basin so far this year — Ana, Bill, Claudette, Danny and Elsa. Of those five, Elsa was the only one to gain hurricane strength.