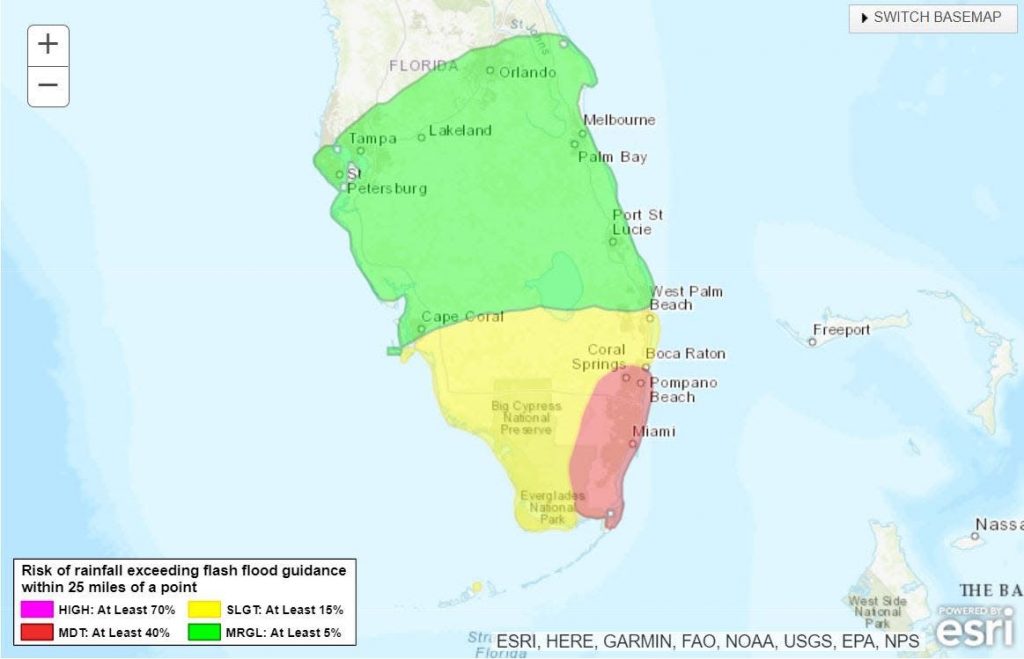 A tropical system — now known as Potential Tropical Cyclone One — gathering strength near the Yucatan Peninsula may become the first tropical storm of the 2022 Atlantic hurricane season as it heads toward Florida, according to the National Hurricane Center.

The Hurricane Center in its 5 p.m. advisory Thursday began issuing a Tropical Storm Watch for most of Florida, including the state’s east and west coasts, Florida Keys, Lake Okeechobee and Florida Bay.

The system, which has maximum sustained winds of 35 mph, is expected to become a tropical depression on Friday and a tropical storm late Friday or Friday night as it moves northeast over the Gulf of Mexico, according to the Hurricane Center.

If sustained winds strengthen to 39 mph, it would become Tropical Storm Alex, the first name on this year’s list of storm names for the Atlantic basin.

Regardless of development, the system could bring flooding rains across South Florida, with some areas seeing 8 to 12 inches of rain. AccuWeather forecasters are predicting up to 20 inches in some areas.

Details on Potential Tropical Cyclone One

At this time, AccuWeather meteorologists expect the tropical rainstorm to become a tropical depression over the southeastern Gulf of Mexico on Friday, prior to reaching the Florida Keys and the southern part of Florida Friday night and Saturday.

The system is likely to become a tropical storm while crossing Florida or perhaps just east of Florida.

There is a chance that if wind shear drops off quickly, a faster ramp-up to a tropical storm can occur, perhaps before the system reaches Florida.

What could be the impact of the tropical system on Florida?

The budding storm is expected to slice across Florida with torrential rain and produce building seas and rough surf in the region.

Regardless of development, areas of heavy rainfall are likely across portions of the Yucatan Peninsula and western Cuba during the next day or so, spreading across southern and central Florida and the Florida Keys Friday and Friday night, and the northwestern Bahamas on Saturday.

These heavy rains could cause scattered to numerous flash floods across South Florida and the Florida Keys.

When could the tropical system affect Florida?

As the storm moves northeast, flooding rains will begin to impact South Florida as early as Friday, according to AccuWeather.

As the storm moves into Florida, it will bring a large swath of torrential rains from the Keys to the southern and central parts of the state. The heaviest rain will likely occur in South Florida from Friday through Saturday night, with AccuWeather Local StormMax™ predicting up to 20 inches.

Regardless of whether the system becomes a tropical depression or tropical storm, it will approach Florida with drenching downpours and gusty thunderstorms from Friday to Saturday.

What other impact could the storm bring to Florida?

“There is also the potential for a few tornadoes and waterspouts as the system crosses the Florida Peninsula or passes just to the south of Florida,” AccuWeather Senior Meteorologist Brett Anderson said.

In addition to torrential downpours and the likelihood of urban flooding, building seas and surf will occur around southern and central parts of Florida and the northern Bahamas.

If you can’t see any local weather warnings here, you’ll need to open this story in a web browser.

Tracking the tropics in real time:

These graphics, which update automatically, show you activity in the tropics in real time:

We will continue to update our tropical weather coverage daily. Download your local site’s app to ensure you’re always connected to the news. And look at our special subscription offers here.