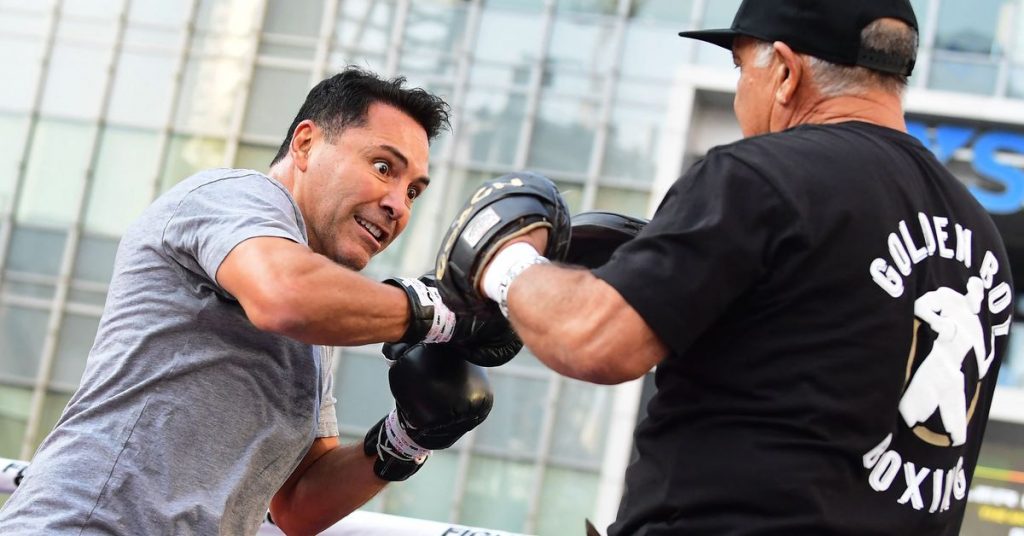 Just last week, Triller COO Thorsten Meier told Yahoo! Sports that the promotion would be “stepping away from the exhibition stuff,” in response to their widely panned recent fight card featuring a headlining bout between Evander Holyfield and Oscar De La Hoya.

For fight fans hoping that might mean an end to old men duking it out atop PPV cards, however, it doesn’t seem the upstart social media and combat sports platform is interested in that serious of a course correction. In a recent episode of the MMA Hour, Triller president Ryan Kavanaugh sat down with Ariel Helwani to talk about the promotion’s future plans. And it seems up near the top of their upcoming schedule is a re-booking of the planned bout between Oscar De La Hoya and Vitor Belfort.

The ‘Golden Boy’ was originally set to face Belfort at the Staples Center in Los Angeles for the promotion’s September 11th PPV card, but was sidelined by a serious case of COVID-19—resulting in the switch to Holyfield, and move to Florida. It seems the former multi-division boxing champ has since made a full recovery, however, and is now in talks to move ahead with the original bout as planned.

“The Oscar De La Hoya/Vitor fight, on Thanksgiving – if we can make this happen – has just become much more interesting,” Kavanaugh explained. “Because, for all those people who seem to be upset at Vitor for what just happened with Holyfield, you’ve just made this a much more personal fight, if you will. And Oscar becomes somewhat of a, not just his own ‘Golden Boy’, but coming in for revenge for Holyfield. And so, we are in talks with Oscar about having him fight Vitor on Thanksgiving weekend, Saturday [November 27th], and calling it ‘The Revenge’.”

As to what that might mean for the $30 million, winner-takes-all bout between Belfort and Jake Paul that Triller has been trying to capture? It sounds like that’s still something they’re hoping to make as well.

“We’re not moving on because, look, Vitor wants to fight a lot,” Kavanaugh said, speaking of the bout with Paul. “So, we would do both … But no, they wouldn’t be mutually exclusive. I just think that there’s a very big opportunity right now to capitalize on—I’ll call it ‘the boxing world who isn’t necessarily a purist’. But the boxing world who was looking at it saying, ‘Hey, this was just Vitor being unfair to Holyfield,’ which I don’t agree with when I watch the fight.

“I think a lot of what Holyfield was saying is true. I think he got his foot stepped on. By the way, he’s swinging to knock that guy into space—that’s why he swung himself into the ropes. And, you know, I do think it got unfairly stopped. Not commentating on whether I think he should be fighting or not, but I think there’s opportunities for both. And Vitor is one of those who says he’s willing to fight every month, not that I condone that either. But, we will probably do both.

“I think we’ll probably try and do the Oscar fight first, because Oscar was in such good fighting shape, and now that he’s recovered from COVID, we don’t want him to lose that fighting shape. And I think Jake needs to get back into fighting shape, from what I understand. That could be wrong,” Kavanaugh added, going on to explain that he had heard Paul say he was looking to take time off after his Woodley fight.

Does that mean that Belfort vs. De La Hoya would be a pro bout and not an exhibition? At 48, De La Hoya is a decade younger than Holyfield. And while the fight between he and Belfort was originally said to be an exhibition, it was eventually promoted as a pro fight, up until its cancellation. Then again, so was Holyfield vs. Belfort, which ended up going in the books as an exhibition bout when all was said and done.

Either way, it seems likely that Triller will find a way to get two of yesteryear’s combat sports stars back in the ring, facing off in a full contact fight, with a healthy amount of money on the line. Whether that’s the smartest move for everyone involved remains to be seen.