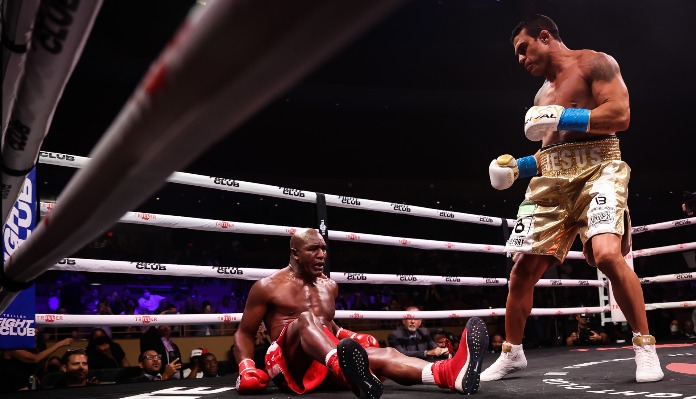 The medical suspensions from Triller Fight Club last Saturday in Florida have been revealed and Evander Holyfield only got a 30-day suspension.

In the main event of the card, 58-year-old, Evander Holyfield stepped up on short notice to box Vitor Belfort. It was revealed the fight would be an exhibition which many thought would mean it would be a light sparring match like Mike Tyson vs. Roy Jones Jr. was. Yet, it was far from that as Belfort blitzed Holyfield and hurt him a few times before dropping him and then getting the first-round TKO victory. Despite him getting beat badly, Holyfield only got a 30-day suspension.

In the co-main event, Anderson Silva had his second boxing appearance since being released by the UFC and he knocked out Tito Ortiz in the first round. Ortiz went out rather quickly and with him getting knocked out cold, Ortiz got a 60-day suspension from the commission.

MMA Junkie was able to get the list of medical suspensions from the Florida Department of Business and Professional Regulation, the commissioning body that oversaw the event. However, it should be noted the suspensions can end sooner if they have been cleared by a doctor.

Although Holyfield got a 30-day suspension, some had made it vocal they don’t want to see him fight again. However, he was disappointed in the ref stopping the fight early.

“I wasn’t hurt. The thing is, there wasn’t no shot that hurt me really bad. He’s strong and he got that shot and I was off balance… I think it was a bad call. I think the referee shouldn’t stop the fight that quick.”

If Holyfield will box again is uncertain, but he did mention Mike Tyson as an option. As for the other three, it’s very likely both Belfort and Silva will box again while Ortiz has expressed interest but whether or not he will is uncertain.

What do you make of Evander Holyfield only being suspended for 30-days?