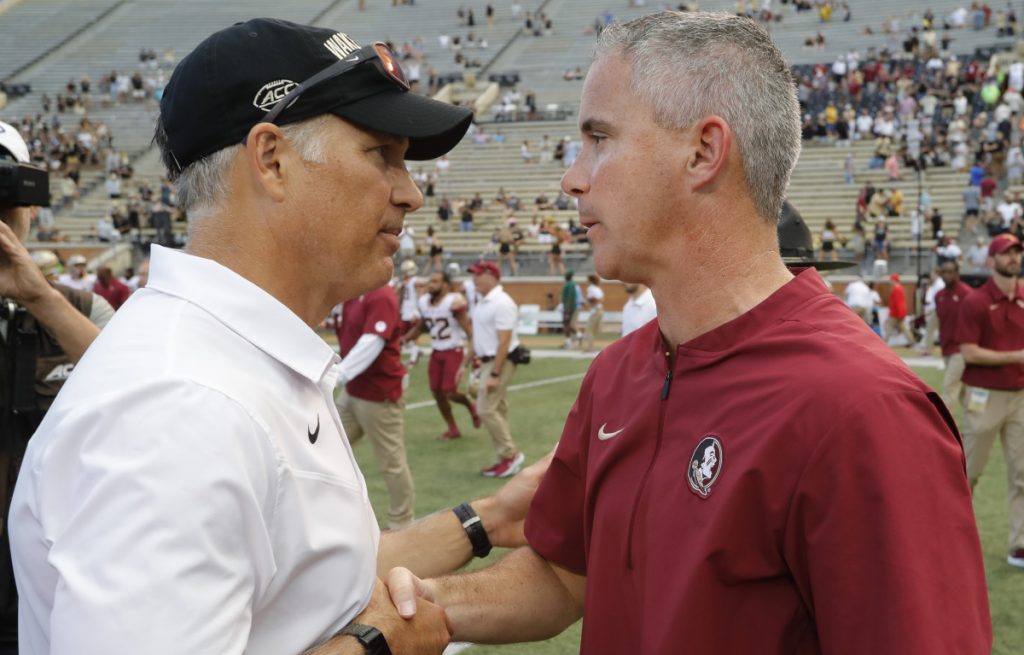 Florida State was dominated on the road by Wake Forest, 35-14, on Saturday afternoon. From beginning to end, the Demon Deacons controlled the game at their pace and frankly, made it look easy. The loss dropped the Seminoles to 0-3, the worst start in program history since 1976, or 45 years.

There’s not really a ton to say. Going into the weekend, there was hope that FSU would be able to respond after the worst loss in school history with some intensity. Instead, they once again crumbled in the face of adversity. It’s a similar tale to what we’ve seen over the past few years but that doesn’t make it any less disappointing.

Here are three thoughts on the disheartening result.

I don’t care whether it comes on the coaching staff or the depth chart but some type of change is desperately needed right now. If not for the sake of simply sparking the team, do it to show that you will be held accountable when you repeatedly make mistakes.

The spotlight is on defensive coordinator Adam Fuller and offensive coordinator Kenny Dillingham. There has been a common theme in all 12 games of Mike Norvell’s tenure. The defense is a liability, particularly on the back end. Man coverage, zone coverage, blitzes, it hasn’t mattered.

Following another game where the defense surrendered nearly 500 yards, countless big plays, and made multiple mental errors to keep drives alive, will Fuller be with the team next week? If so, the least that can be done is to give younger players time in the defensive backfield. Jarrian Jones, Jarvis Brownlee, and Jammie Robinson were putrid against the Demon Deacons.

Looking over at the offense, it’s time for Norvell to take over play-calling duties. Dillingham just hasn’t been able to get into a rhythm.

2. There’s still no stability at quarterback or on the offense in general

Speaking of a rhythm, what was going on with the rotations on Saturday? Once again, Jordan Travis and McKenzie Milton rotated at quarterback like a pair of musical chairs. In fact, it wasn’t until the fifth drive of the game where the same signal-caller led a back-to-back drive. By the time Travis was finally establishing some consistency, he got banged up and it all went down the drain.

Running back Treshaun Ward had two back-to-back big plays to set FSU up in scoring territory in the third quarter. He was instantly called to the sideline in favor of Jashaun Corbin, who was stuffed on third down. The ‘Noles went for it on fourth down on a Milton keeper that was blown up. Why are we letting a quarterback on a surgically repaired knee have a designated run play? I couldn’t tell you.

As I mentioned above, it’s time for Norvell to become the primary play-caller. It’s also important to shorten the rotations moving forward.

3. This has a chance to get uglier

Last week, fans were wondering if this program was at rock bottom after the loss to Jacksonville State. Now, it’s time to propose the same question again.

Looking at the schedule, it can’t be understated how important that it is for Florida State to get a victory in at least one of the next two games. Louisville is coming to town next Saturday, led by Malik Cunningham and fresh off of putting up 42 points on UCF. Following that, you get a date with a middling Syracuse team at home.

If the Seminoles go winless during that stretch, they would enter North Carolina at 0-5.

Unfortunately, it’s possible that the worst is still yet to come.