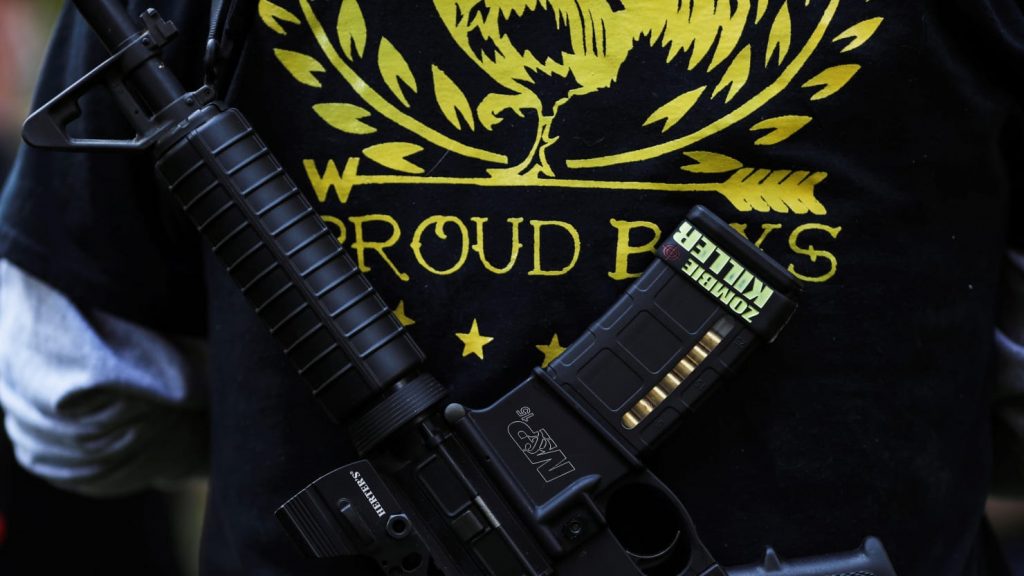 Three schools in Vancouver, Washington went into lockdown Friday after a group of anti-mask protesters that included the Proud Boys attempted to gain entry and disrupt the school day.

Skyview High School, Alki Middle School, and Chinook Elementary were on high alert after local members of the Proud Boys extremist gang, frustrated parents of students, and other anti-maskers rallied against the requirement that students, staff, and teachers wear face coverings.

The incident is just the latest example of the Proud Boys teaming up with anti-maskers to threaten school boards, from Florida to New Hampshire, over COVID mandates.

On Friday, the Proud Boys attempted to escort a freshman student seeking a medical exemption from the mask mandate into the Vancouver school, according to witnesses cited by Oregon Public Broadcasting. The attempted incursion prompted the call for lockdown.

The freshman’s mom, Megan Gabriel, had claimed that the mask could trigger panic attacks in her daughter. The school had declined the request.

Patriot Prayer, a local far-right group, rallied supporters by saying that students would be arrested if they refused to comply with the mask mandate, according to Oregon Public Broadcasting. The claim was untrue.

Carrying signs that read “Masking kids=abuse” and “Medical choice: Your body, your choice,” demonstrators rallied in front of the schools and on the sidewalks near buses. Some protesters shouted slurs at female students, security guards told OPB.

He said of the protest, “It’s a thing that’s happening outside, but students seem to be calm. It’s mostly like ‘Let them do their thing.’ School is continuing.”

A 16-year-old student named Lucas told OPB, “All the learning gets disrupted. We have to sit down quietly, not make noise, and we were hunkered down in our classrooms for around an hour to an hour-and-a-half.” He said he later handed out masks to the protesters.

Kyle Sproul, school board president of Vancouver Public Schools, told OPB, “Regardless of one’s stance on mask mandates, I think most parents in our community agree that protesting at our school campuses and disrupting the school day is not in the best interest of students.”

The Clark County sheriff’s office, whose jurisdiction includes Skyview, did not immediately respond to request for comment.

There have been a rash of disturbing COVID-related dust-ups at schools around the country. On Thursday, a father stormed into an elementary school principal’s office in Arizona with a friend wielding plastic handcuffs, insisting the school broke the law by asking his child and six others to wear a mask and quarantine after being in close contact with someone who tested positive for COVID-19.