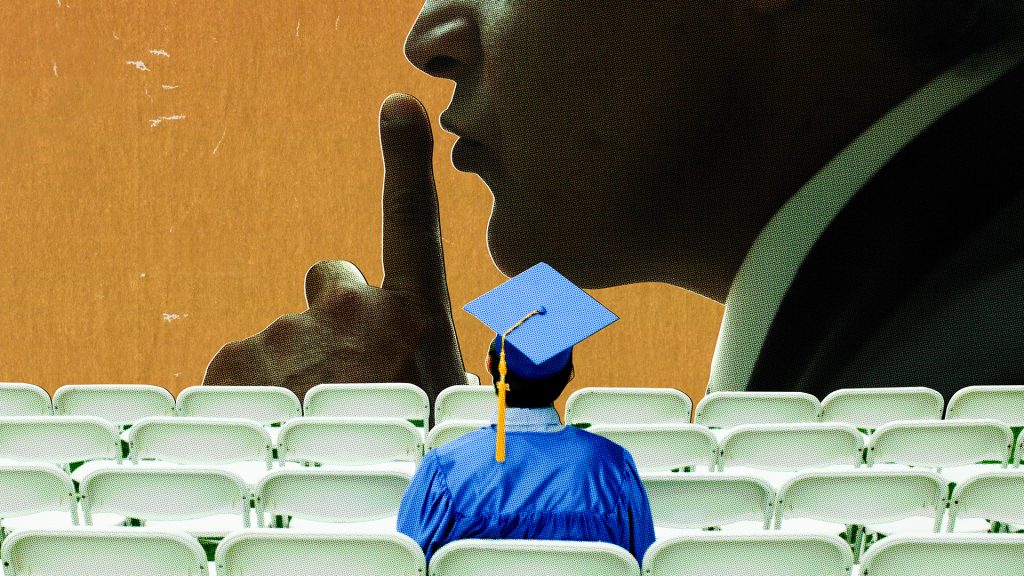 Zander Moricz is graduating in two days, and he wishes he were having the time of his life. The 18-year-old Florida student finished at the top of his class and is set to attend Harvard University in the fall. On Sunday, he will be delivering the commencement address to fellow graduates at Pine View School in the Tampa suburb of Osprey as their student body president. His graduation should have felt like the most beautiful dream, the culmination of everything he’d been working toward for the past four years.

Instead Moricz said it’s been the most miserable week of his entire life. “It’s been absolutely awful,” he told VICE. “This is my last week of high school, and I haven’t thought about that fact once.”

Moricz became the center of national media attention following a series of viral tweets on May 9 in which he claimed that his school informed him that he would not be allowed to discuss his LGBTQ identity in the speech. Moricz is a lead plaintiff in a federal lawsuit against a Florida statute referred to by opponents as the “Don’t Say Gay” law, and he said in the posts that his principal, Stephen Covert, told him that administration was prepared to “cut off my microphone, end my speech, and halt the ceremony” if he brought up his activism.

“I am the first openly gay class president in my school’s history,” he wrote in the thread. “This censorship seems to show that they want me to be the last.”

When contacted by VICE, a representative for Pine View School responded on behalf of Covert with a prepared statement affirming that the school supports “the incredible diversity in thought, belief, and background in our school” and “the uniqueness of every single student on their personal and educational journey.”

In his tweets, Moricz also alleged that this wasn’t the first time that Pine View School had threatened him over his advocacy on behalf of the LGBTQ community. Before Governor Ron DeSantis signed the controversial bill into law in March, he organized a walkout of his fellow students in opposition to the legislation. He alleged in the tweets that the administration tore fliers advertising the event “from the walls and told me to shut down the protest.”

“They said they would send school security if I did not listen,” he wrote at the time. “I held the walkout anyways, and it became our county’s largest protest. I won’t give into threats and I won’t be silenced.”

His refusal to be censored by his school has had devastating consequences, Moricz said. Following the “Don’t Say Gay” walkout, he was targeted with death threats, and strangers showed up to his parents’ workplaces looking for him. He no longer goes out in public by himself, and his school had to increase security both on campus and at the graduation ceremony, in case the threat of violence escalates.

While many of his classmates have been supportive, Moricz said that others have struggled with the situation, even those who have stuck up for him in the past. He said that having so many of his peers angry with him because he’s standing up for his civil rights is “exhausting and dehumanizing.”

“Everyone’s upset because when you have a really awesome moment for everyone overshadowed by one person, it’s upsetting,” he said. “That’s incredibly valid, but this has also been incredibly isolating to experience. I’m not sitting here talking to you about what I do on the weekend or who my favorite designer is. We’re discussing my experience of oppression and how it relates to a lawsuit I’m participating in. It’s been absolutely awful.”

Moricz’s lawyers said the gag order from his school is a prime example of why they believe that Florida’s “Don’t Say Gay” law is so harmful. Formally known as the Parental Rights in Education Act, House Bill 1557 bars teachers and other school staff from addressing topics related to “sexual orientation and gender identity” in K–3 classrooms. But critically, HB 1557 does not stop there: It also mandates that discussions regarding LGBTQ identity must be “age-appropriate” for all K–12 students without defining what might constitute offending material.

Roberta Kaplan, the attorney arguing Moricz’s case, said the incident illustrates that HB 1557 was intentionally crafted to be “vague, ambiguous, and overbroad” in order to silence virtually all discussions of LGBTQ identity in Florida schools.

“We live in a country of laws, and that means that people are supposed to understand what is OK and what is not OK under the laws,” she told VICE. “A statute like this is completely inconsistent with that principle. It’s quite clear that the law was deliberately written that way so that it would chill speech because people will be so scared about what to say or what not to say that they just wouldn’t say anything.”

“I’m not sitting here talking to you about what I do on the weekend or who my favorite designer is. We’re discussing my experience of oppression and how it relates to a lawsuit I’m participating in. It’s been absolutely awful,” Moricz said.

Although HB 1557 isn’t set to become official policy until July 1, Florida students across the state have already felt its effects. Will Larkins, a 17-year junior in the Orlando suburbs, was reportedly subjected to an investigation by administrators at Winter Park High School after giving a presentation to their class in April about the Stonewall Riots, the 1969 protests that kickstarted the modern LGBTQ rights movement. Larkins also said that he was removed from the class following the lecture, although the school did not respond to comment prior to publication time.

Lyman High School, which is just a 20-minute drive from Larkins’ school, was met with backlash earlier this month after administrators announced that photos of its “Don’t Say Gay” walkout in the yearbook would be covered up with stickers. The Seminole County School Board eventually reversed the decision, saying the photos would be accompanied by smaller stickers clarifying that the Longwood campus did not endorse the protest.

Kaplan said these examples illustrate that schools are being overly cautious because they don’t know how to follow the law. She said that HB 1557, which allows private individuals to sue school districts for non-compliance, allows “literally any parents in the school district to interpret the law and then enforce it.”

“No one wants lawsuits,” she said. “That’s one thing about American society: No one likes to be defending a lawsuit, including school boards.”

Moricz believes his school wants to do the right thing but that it’s being prevented from doing so by Florida lawmakers. Before the “Don’t Say Gay” bill was signed into law, he had enjoyed nothing but support from faculty members at Pine View School. He is currently debate captain and model U.N. president and credits his campus as the place where he found his voice and “became comfortable with public speaking and advocacy.”

In fact, it was a faculty member at Pine View School who helped Moricz come to terms with his identity as a gay man. The first person he came out to during his freshman year of high school was a teacher who is a member of the LGBTQ community, and Moricz said that having the ability to be supported by “someone who I knew would be receptive, who could answer my questions, and could relate to my experience meant everything.” He doubted that he would have had the courage to come out to friends and family without having that safe space first.

Moricz fears that a law like HB 1557 is going to keep LGBTQ students in the closet, as young people may have no one to turn to with those resources taken away. “You don’t do your debut performance on Broadway because the stakes are so high,” he said. “If you’re telling people, ‘Go big or go home, there’s no alternative,’ you’re going to have children choose to never come out.”

ORIGINAL REPORTING ON EVERYTHING THAT MATTERS IN YOUR INBOX.