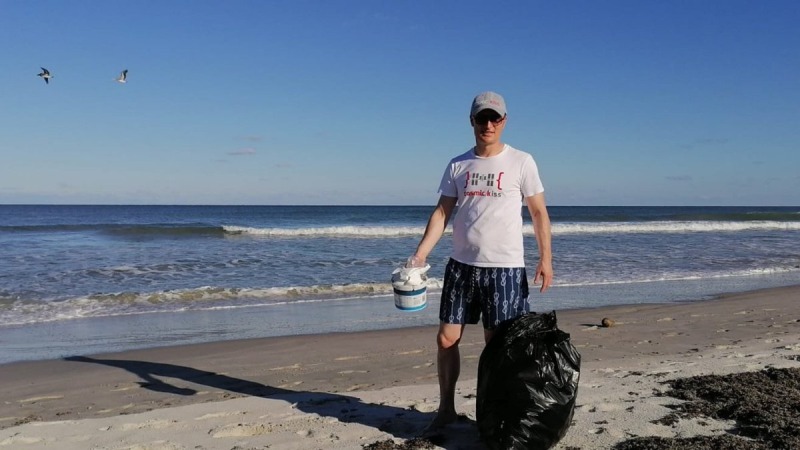 A German astronaut is showing his love for Earth during a few extra days on the planet’s surface before his first space mission.

Matthias Maurer, who is waiting with the rest of Crew-3 team for a delayed ride to the International Space Station, has spent part of his quarantine picking up trash on the Florida beach, within range of his SpaceX launch site at NASA’s Kennedy Space Center in Cape Canaveral. The mission, which will launch four astronauts to the station on a SpaceX Crew Dragon and Falcon 9 rocket, will launch no earlier than Saturday (Nov. 6).

“I’ve been relaxing during my quarantine by collecting rubbish on the beach 😳 ,” Maurer wrote on Twitter, showing a picture of himself holding a large trash bag.

I’ve been relaxing during my quarantine by collecting rubbish on the beach 😳 Sadly, this is not the only bag I filled. We really need to think about our environmental impact on Earth and in space. Clean oceans, clean space! It’s up to all of us. 🌍 pic.twitter.com/yELcONkolANovember 1, 2021

“Sadly, this is not the only bag I filled,” he continued. “We really need to think about our environmental impact on Earth and in space. Clean oceans, clean space! It’s up to all of us.”

The crew was delayed first by weather and then by an astronaut medical issue, which NASA did not disclose in detail except to say it was not COVID-19.

Maurer’s first space mission on behalf of the European Space Agency is appropriately called “Cosmic Kiss”, which is meant to declare how much he loves space — a love that clearly also extends to the planet Earth.

“It communicates the special connection the Station provides between Earth’s inhabitants and the cosmos,” Maurer said of his mission name in a 2020 ESA blog post. “It also conveys the value of partnership in exploring farther to the Moon and Mars, alongside the need to respect, protect and preserve the nature of our home planet as we seek a sustainable future on Earth.”

Maurer has been designated the 600th person in space and when he reaches orbit, he will be accompanied by three NASA astronauts: mission commander Raja Chari, pilot Tom Marshburn and mission specialist Kayla Barron. With the exception of Marshburn, the other three astronauts are on their first spaceflights. Crew-3 is expected to spend about six months in orbit.

Elizabeth Howell is a contributing writer for Space.com who is one of the few Canadian journalists to report regularly on space exploration. She is the author or co-author of several books on space exploration. Elizabeth holds a Ph.D. from the University of North Dakota in Space Studies, and an M.Sc. from the same department. She also holds a bachelor of journalism degree from Carleton University in Canada, where she began her space-writing career in 2004. Besides writing, Elizabeth teaches communications at the university and community college level, and for government training schools. To see her latest projects, follow Elizabeth on Twitter at @howellspace.