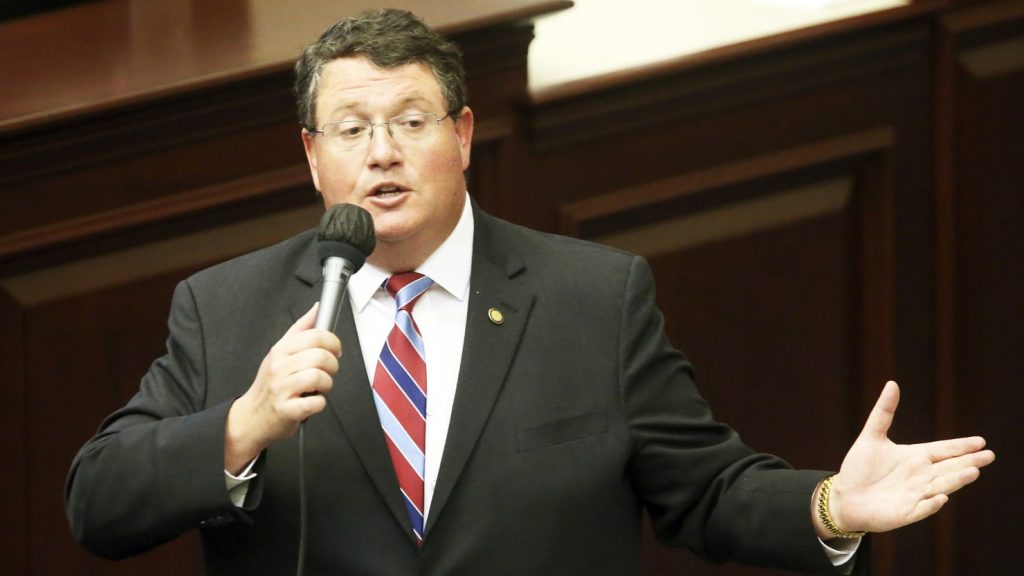 Florida State Rep. Randy Fine says he championed the bill to strip Disney of its special self-governance status because the entertainment company spoke out against the “Don’t Say Gay” law and brought “California values” to his state.

Fine demonstrated his own values earlier this month in a series of texts where he repeatedly described a school board member as a “whore.”

And, in those same texts, Fine sank further, from a sexist lout to someone who is lower than low—even by the standard of Florida politics.

At the same time Disney was preparing to host the 2022 Special Olympics at its longtime Florida home, Fine threatened to cut state funding for the charity organization.

He did so because a female school board member was invited to a local Special Olympics fundraiser last week, and he was not.

In keeping with Randy’s values, he lied about it.

The texts, first reported by Florida Today, show Fine was miffed because the West Melbourne Police Department had failed to invite him to its fundraiser, but issued a blanket invitation to the Brevard County School Board. That included Jennifer Jenkins, to whom Fine takes extreme personal as well as political exception.

Fine became incensed when a West Melbourne City Council member said the failure to invite him was just an oversight and he would be more than welcome to last Friday’s fundraiser at a Chick-fil-A.

“I’m not going to jack shit where that whore is at,” Fine texted the councilman.

Fine informed the councilman that funding for the city project would also be excised from the state budget.

In keeping with his values, Fine denied threatening to use his closeness to Gov. Ron DeSantis to have the Special Olympics funding cut. He was proven a liar when Florida Today obtained copies of the texts earlier this month.

Fine also insisted he had not tried to have the city attorney fired for failing to keep the texts from public view. The texts proved that, too, was a lie.

All that from someone who is on the board of the Central Florida Council of the Boy Scouts of America and served as an adult leader at the 2021 National Boy Scout Jamboree. Scout Law lists 12 attributes that define a Boy Scout, beginning with TRUSTWORTHY: “Tell the truth and keep promises. People can depend on you” and also including COURTEOUS: “Be polite to everyone and always use good manners.”

Fine did not respond to phone messages and emails requesting comment about his texts and history. Jenkins told The Daily Beast she believes that she initially became a target of Fine’s anger when she was first running for school board in the summer of 2020. Jenkins says Fine made it known his wife favored her over his preferred candidate.

“He is such a narcissist,” Jenkins said.

But the animus intensified when Jenkins came out in favor of a mask mandate, the only sane position for a teacher-mother-school board member in a district whose schools had the highest infection rate in Florida.

Jenkins says she was barred from attending a press conference last November where Fine joined DeSantis in opposing mask mandates. As was reported by The Daily Beast, anti-maskers swarmed Jenkins’ residence that night. One protester coughed in her face.

Fine remained fixated on Jenkins, calling her “Jezebel Jenkins” and accusing her of having an affair with a convicted sex offender. He did that even though he had co-sponsored a bill prohibiting cyberbullying. The same legislation accorded civil immunity for motorists who run over protesters.

That legislation can be said to reflect Florida values, but Randy’s particular values were established long before he moved to that state. Online voter registration records indicate that Fine was a registered voter in Nevada until at least 2005. He worked as a consultant in the gaming industry there, and in Detroit. He was in charge of marketing at a casino in Atlantic City, NJ that launched a “Gamblers Wanted” campaign guaranteeing no one could lose more than $100 at the slot machines.. The casino was cited for false advertising.

Fine did not move to Florida until 2006. That means he is a relative newcomer, taking up official residence in the Sunshine State 35 years after the 1971 opening of Disney World on a site made more attractive by guarantees of special tax and regulatory status.

While Disney was giving visitors Mickey Mouse, Cinderella, and the rest of the Magic Kingdom, Fine eventually became the state representative for the 53rd District and demonstrated Randy values. He described Palestinians as “animals.” He also proposed shutting down Central Florida University for three to five years to punish it for using funds to pay faculty that were appropriated for other purposes. The ensuing uproar caused him to say he was “just kidding.”

With the bill he introduced to strip Disney of its special status, Fine became DeSantis’ attack dog.