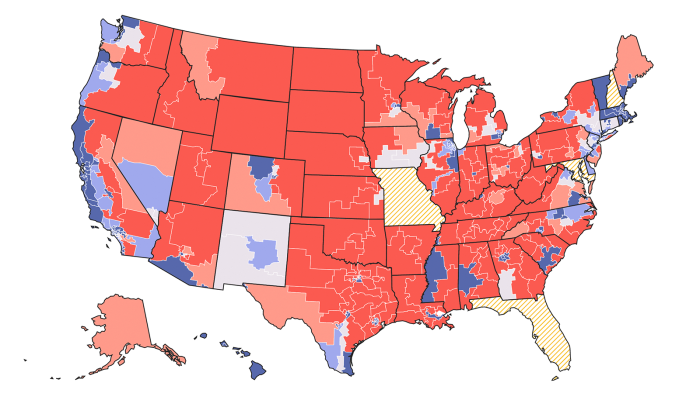 Congressional redistricting — the process of redrawing the nation’s 435 congressional districts to reflect the results of the 2020 census — is not quite finished, but it’s getting darn close. Only four states (Florida, Maryland, Missouri and New Hampshire) have yet to approve new maps (though the maps in several states are currently being challenged in court, so some states that have approved new maps could see those maps overturned — as happened in Maryland just last week).

So while some of the specific numbers will change, we now have a good sense of what the big-picture takeaway from this redistricting cycle will be. No matter which way you slice it, Democrats have gained blue seats from the mapmaking process, making the House playing field between the two parties more balanced than it has been in decades. But that doesn’t mean the 2022 congressional map should be considered “fair.”

As the maps stand on March 30 at 5 p.m. Eastern, 175 congressional districts have a FiveThirtyEight partisan lean1 of D+5 or bluer, 181 have a partisan lean of R+5 or redder and 33 are in the “highly competitive” category between D+5 and R+5.

Of course, that’s just the partisan lean of the districts. To get a sense for how these changes will affect the race for control of the chamber, you need to factor in which party currently controls each seat (not to mention the national political environment, but put that aside for a moment). Still, Democrats are likely to gain seats from redistricting in 2022 even after you consider that they already hold a lot of those newly blue-leaning seats. By my calculations, redistricting alone should net Democrats about two more seats in the House next year,California, one in Illinois, one in Michigan, three in New York and potentially one each in New Mexico and Ohio), while between six and eight Democratic-held districts have been redrawn to favor Republicans (two in Arizona, one in Georgia, one in Michigan, one in Ohio, one in Tennessee and potentially one each in Kansas and New Jersey). That’s a net gain of one seat for Democrats, give or take. But Democrats also gained one seat on net from reapportionment: Oregon, North Carolina and Texas each added one new blue seat, while California and Ohio each lost one.

” data-footnote-id=”2″ href=”http://fivethirtyeight.com/#fn-2″>2 while Republicans are in position to lose around three or four seats on net from the process.Montana, one in Texas and potentially one in Colorado, but they also subtracted one from Illinois, one from Michigan, one from New York, one from Pennsylvania and one from West Virginia.

” data-footnote-id=”3″ href=”http://fivethirtyeight.com/#fn-3″>3 Of course, the national political environment (which is currently Republican-leaning) will have a much bigger impact on the 2022 midterms than redistricting, so this doesn’t mean Democrats are favored to hold onto the House — but it does mean that redistricting made that task slightly more possible.

” data-footnote-id=”4″ href=”http://fivethirtyeight.com/#fn-4″>4 Florida is the only state that might deviate significantly from the old map. If we add their projected partisan breakdowns on top of the numbers we already have, I estimate that we’ll end up with 220-223 districts that are to the right of the nation as a whole and 212-215 districts that are to the left of the nation as a whole. Pretty evenly split!

Accordingly, the tipping-point congressional district — the one that theoretically would be the majority-clinching 218th seat for either party — should be historically close. Since 1996, the tipping-point House seat has always had a FiveThirtyEight partisan lean of R+2.7 or redder. In recent years, it’s been closer to R+5 — meaning, in theory, Democrats have to win the national aggregate House vote by roughly 5 or more percentage points to win a majority in the House. Depending on how things shake out in the remaining four states, the tipping-point seat could be anywhere from R+1.0 to R+1.9 in 2022.

Even in Democrats’ worst-case scenario at this point, the House’s long-standing (we’re talking over 50 years) bias toward Republicans would drastically diminish. That would certainly be historic — but it wouldn’t mean everything is finally hunky-dory with our congressional maps. Some of this increase in balance is thanks to courts striking down Republican gerrymanders in states such as North Carolina, but Democrats achieved this near-parity mostly through gerrymanders of their own in states such as New York and Illinois. The result is an overall national map that looks fair but individual state maps that are anything but.

We have metrics to show this. Efficiency gap is a statistic that attempts to quantify how efficient a map is at converting votes into seats for a given party. For example, a map with an R+10 efficiency gap would be expected to produce 10 percent more Republican-leaning seats than a fair map would. The inventors of efficiency gap proposed a test whereby any map that produces two or more extra House seats for a party should be considered an unconstitutional gerrymander. Under the maps in place for the 2022 elections, seven states flunk that test, and several others come close.

A total of 21 states’ maps are worth at least 0.7 extra House seats to the advantaged party, according to efficiency gap. Of course, in real life, parties can’t win fractions of a seat, but in almost all of those 21 states, it’s possible to draw a map that gives another seat to the disadvantaged party. Tennessee dismantled the blue district surrounding Nashville and turned it ruby-red. Utah declined to draw a Salt Lake City-centered district that would have been safely Democratic. New Mexico shifted its only red district 18 points to the left. New Jersey likely cut off Republicans’ chances to unseat three Democratic representatives (Josh Gottheimer, Andy Kim and Mikie Sherrill).

Put bluntly, the national House map still isn’t fair; its gerrymanders are just more fairly balanced. And the unfairness of the individual maps has other important consequences.

For instance, the new national map is also shaping up to be historically uncompetitive. The number of swing districts has been on the decline for decades thanks to factors like ideological self-sorting and increased polarization. But gerrymandering has played a role too: As mentioned above, six highly competitive districts have been drawn out of existence so far this redistricting cycle. And if you take a more generous definition of “competitive,” the decline is even sharper: The number of districts with partisan leans between D+15 and R+15 has dropped by 10 so far.

Finally, partisanship isn’t the only way to measure the fairness of congressional maps. As I wrote earlier this month, the new maps fall short of providing full representation to racial minorities. For example, the population growth that gave Texas two new congressional seats this year was fueled largely by people of color (mostly Latinos), but the two new districts the state drew were both majority-white. And several Southern states, such as Alabama, declined to draw additional districts where Black people are the dominant voting bloc, despite it being easily possible to do so.

As mentioned above, lawsuits may remedy some of these problems, but time is rapidly running out for any changes to be made in time for the 2022 election. So while the book isn’t yet closed on the 2021-22 redistricting cycle, the nation’s new congressional map still has serious flaws that are unlikely to be fixed before voters go to the polls. That said, we’ll keep our redistricting coverage going until the last map is absolutely, positively, 100 percent final, just in case we get a surprise in one of the last four states or an unexpected court ruling. Keep checking our redistricting tracker for the latest updates.

Nathaniel Rakich is a senior elections analyst at FiveThirtyEight. @baseballot

Elena Mejía is a visual journalist at FiveThirtyEight. @elena___mejia