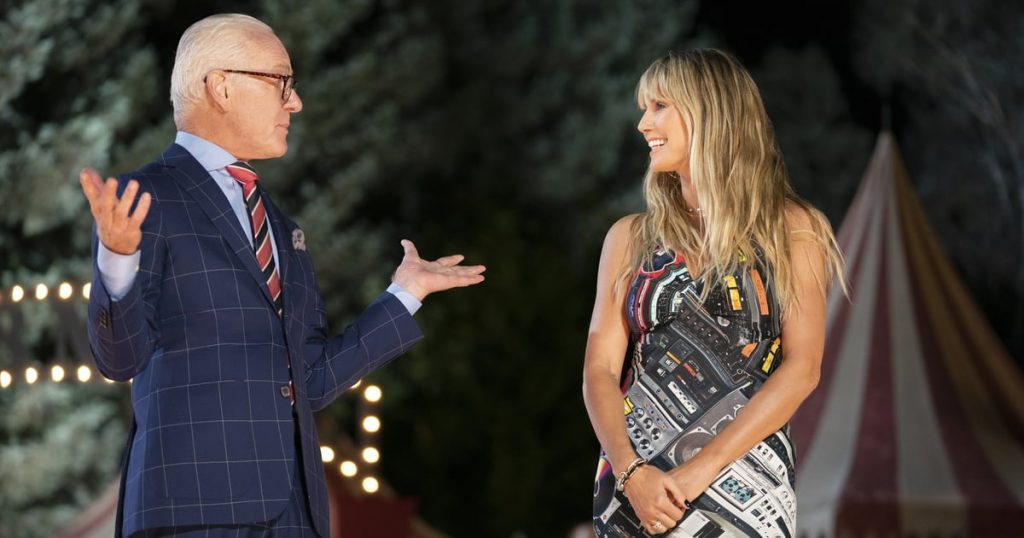 The second season of Prime Video’s Making the Cut comes to a riveting end today as hosts Tim Gunn and Heidi Klum declare a winner. Making the Cut season two introduced us to 10 talented designers: Lendrell Martin, Dushyant Asthana, Olivia OBlanc, Ally Ferguson, Joshua Scacheri, Raf Swiader, Lucie Broachard, Gray Graham, Andrea Salazar, and Andrea Pitter, who had to unleash their creativity and overcome obstacles, all while staying true to their vision and brand identity. We watched these incredible designers show us everything they got, even till the nail-biting, heart-racing last second. Making the Cut put the contestants to the test on their design acumen and versatility, and even their entrepreneurial skills, brand development, and marketing skills. The competitors truly did it all, from designing resort wear, bridal, and avant-garde to social media marketing, working with influencers, and even creating a video campaign. We’re here for the total package, the next global brand.
The second season gave us the twists, the turns, and a whole lot of newness, including judges Winnie Harlow and Moschino’s Jeremy Scott and the first-ever Making the Cut face-off between Ally Ferguson and Olivia Oblanc. In the sixth episode, host and judge Heidi Klum reminded us that “at this point in the competition, it’s not about who does poorly but who did the best.” As a result, we had to say goodbye to Lucie and Raf after the judges needed and expected more from these two talented designers. However, after weeks of killing in the design challenges and receiving consistent praise from the judges, designer Andrea Pitter finally won a challenge, along with Gary Graham.
Episode 7: Store Concepts Recap
For the penultimate episode, the final three designers, Andrea Pitter, Gary Graham, and Andrea Salazar, flex their visual merchandising skills by creating their own concept store showcasing their brand as an experience. The designers have to create a minimum of three new looks for the store, plus they can include up to three looks from previous challenges. Andrea Pitter’s concept store takes inspiration from the New York City subway station but with a chic upgrade, representing the diverse personal styles of everyday people. Andrea Salazar’s concept store resembles a glamorous museum experience with a sensorial touch, complete with her edgy, feminine aesthetic and brand identity. Gary Graham’s concept store has a historical vibe in a circular boutique, complete with a video showcasing the design process – truly a Gary Graham experience. Andrea Salazar wins the challenge, but there is a plot twist. For the first time, the judges decided to keep all three contestants for the finale.
Episode 8: Finale Recap and the Winner
Designers Andrea Pitter, Gary Graham, and Andrea Salazar have to present a business pitch to the president of Amazon Fashion, Christine Beauchamp. Each contestant has to go in-depth on their brand story, how they will scale and invest in their business, and how they will attract and connect with their customer base. They also have to showcase a final ten-look collection that truly encompasses their brand identity and what they learned in this design journey. The finale brings the emotion of designers battling self-doubt, taking risks, obstacles, and missing their families. Tim Gunn even sheds a few tears after reflecting on the journey of the final three contestants. At the last fashion show, judges Heidi Klum, Winnie Harlow, Jeremy Scott, and Christine Beauchamp discuss each designer’s highs and lows, factoring in the final line and the business pitch. While the judges mostly gave rave reviews to all the designers with a few critiques, Jeremy Scott passionately doubled down on his support for Gary Graham’s unique artistic take and individuality in his designs. After the judges deliberated on this tough decision, Andrea Salazar did not make the cut and took third place. Down to the final two contestants, Heidi Klum’s vote went to Andrea Pitter while Jeremy Scott’s vote went to Gary Graham, giving Winnie Harlow the tie-breaking vote. The runner-up is Gary Graham, making the winner of Making the Cut season two Andrea Pitter and her brand, Pantora.
Andrea Pitter gets a mentorship and a chance to sell not one but two entire collections with Amazon Fashion, a three-year storefront lease at the Row DTLA free of charge, plus a whopping one million dollars to invest in her brand. But wait, there’s another plot twist! Christine Beauchamp loved all the collections so much that both Gary Graham and Andrea Salazar also get to sell their respective lines on the Making the Cut Amazon store.
Where to Watch Making the Cut
You can watch the entire first and second seasons of Making the Cut on Amazon Prime. Don’t have a Prime membership yet? You can sign up and get a 30-day free trial.