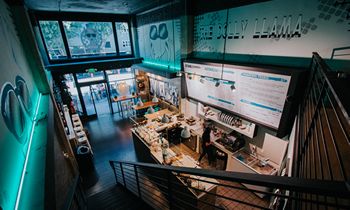 The Dolly Llama is exploding throughout the United States with several units under construction, including one in Dallas, TX (2817 Howell Street, Suite 210), which is slated to open later this month, along with 9 other locations planned to open by the end of the year. Additional multi-unit deals that have been signed include Winter Garden, Dr Phillips, and other North, Central and South Florida regions; Las Vegas, Nevada and Houston and Beaumont, Texas.

“We’ve dubbed 2022 as our year for growth at The Dolly Llama, beginning with the opening of our first franchised location in Dallas, TX later this month,” said co-founder Eric Shomof. “Plus, due to the growing popularity of the brand, in the span of just a few months, we’ve signed deals for more than 25 locations across five states! This is an amazing accomplishment for our team and serves as great motivation to continue our efforts to further expand throughout the country.”

The Dolly Llama was designed to be a modern dessert shop where all guests can enjoy hand-crafted waffles and ice cream in a cool, hip and fun environment. The concept’s success can be, in part, attributed to its innovative and artisanal menu, but the experience provided at The Dolly Llama locations is what makes the shops a beloved destination for Angelenos and tourists alike. The three Los Angeles locations share an unparalleled aesthetic flair and insta-worthy design features such as large neon signs, iconic llama footprints and bubble-waffle shaped prints along the walls, of which the franchised locations will also mirror.

The brand prides itself on offering authentic European flavors and techniques, such as Belgian waffles using traditional methods, and the Hong Kong Bubble Waffle prepared with a special batter that produces a unique crispy and custard-like texture. The three unique waffle styles — OG Liege Waffle, Bubble Waffle, and Bubble Waffle Jr — are the base of the interactive menu of ‘Top Picks’ waffle and ice cream desserts, ice cream waffle sandwiches, and a ‘Build Your Own’ menu, where customers are encouraged to “go nuts” with unlimited toppings resulting in endless flavor possibilities and combinations. Signature Shakes are another over-the-top brand staple.

About The Dolly Llama

The Dolly Llama was founded by real estate leader, Eric Shomof and Samuel Baroux, an acclaimed European entrepreneur and restaurateur who wanted to bring his passion for food and dessert to the states. The name was inspired by a real llama Baroux encountered on a farm in the South of France, and pays homage to his home country. Since its inception in 2017, The Dolly Llama has dominated LA’s waffle scene with its own unique take on the Bubble Waffle, Hong Kong’s #1 street food in addition to Dolly Llama Shakes, and OG Waffles, and aims to prove that all waffles don’t need syrup. In 2020, The Dolly Llama announced that it was taking the unique and exciting brand nationwide by way of franchising and has currently sold 25 units in major media markets across the country. The Dolly Llama currently operates locations in Downtown Los Angeles (611 S. Spring St), Koreatown (273 S. Western Ave), and Sherman Oaks (14545 Ventura Blvd). For more information visit https://www.thedollyllamala.com and for franchising information and opportunities, visit https://www.thedollyllamala.com/franchise.