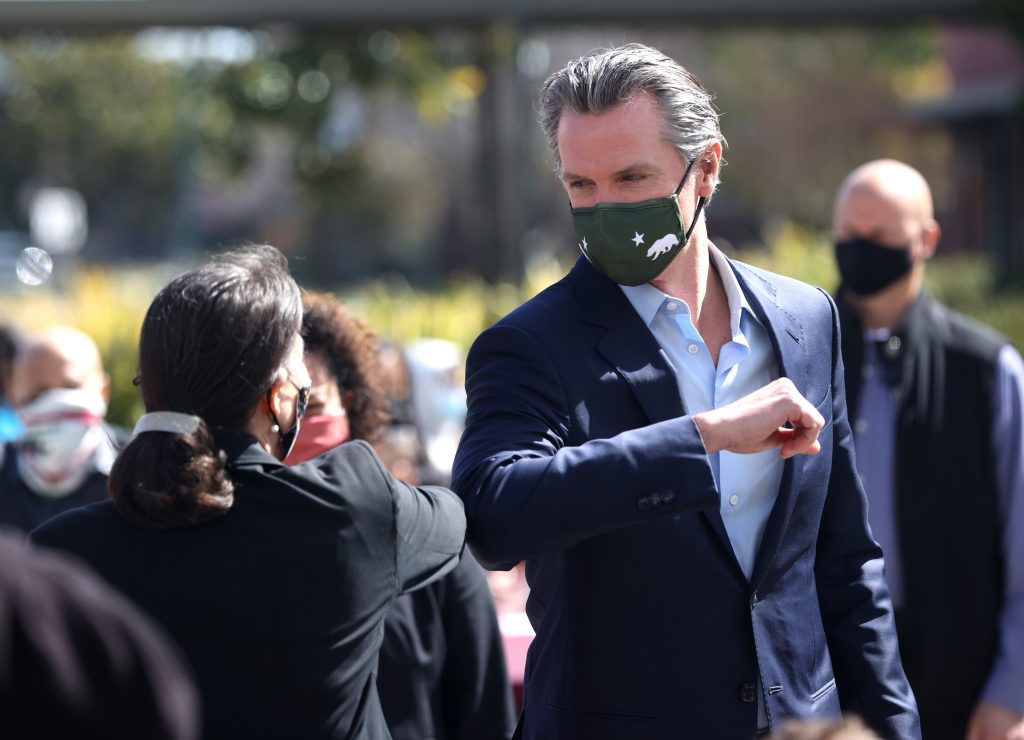 There was a point during the
campaign to recall California Governor Gavin Newsom when the governor’s advisers fretted
about an enthusiasm gap between Republican voters and Democratic voters—something
2021 campaigns and early 2022 campaigns are seeing across the country. On top
of that, the coronavirus pandemic persisted, not just in California but across
the country. The delta variant of the pandemic was reversing the progress the
state had made during the pandemic.

Sean Clegg, one of Newsom’s senior
strategists, recalled the meeting, this past summer, in which the governor told
his campaign team that officials in California’s Department of Public Health
had laid out to the governor’s staff the new and alarming trajectory of the variant’s
spread in the coming days—not weeks, days!—and noted that the campaign would
have to factor that into its plan to keep the first-term governor in office. “I
think we saw immediately the opportunity to not play defense on delta but to
play offense,” Clegg recalled in an interview.

So the Newsom team dived in, opting
to frame the recall not as a referendum on Newson, which it literally was, but as
a choice between Newsom and a single conservative alternative aligned with
Donald Trump, whose skepticism about vaccinations is on par with the most
conservative corners of the Republican Party. Right-wing radio host Larry
Elder, who emerged as the most likely Republican to become governor if voters
did recall Newsom, wanted Republicans to know he was of the anti-mandate,
anti-masking variety—and so did Newsom’s team.

“Our campaign strategy, in a nutshell, was to identify the villains and define the stakes, and the delta surge
elevated the stakes level to life and death. That’s what we said in our ads,”
Clegg said. “It’s not hyperbole.”

According to a memo by Newsom’s
pollster, David Binder, reviewing the outcome of the recall, California swing
voters “felt the number one issue facing the state was managing the Covid pandemic.”
The memo detailed survey findings from August that showed majorities supported allowing
businesses to require vaccine verification for customers and vaccination requirements
for health care workers and teachers.

“When voters were provided a
contrast between Governor Newsom’s support for these measures and Republican
candidates’ vow to prohibit them, they strongly showed a preference for
Governor Newsom’s policies, with a margin of 17 percent from the key group of
independent voters,” the memo read.

The Newsom campaign acted on these
sentiments in ads hammering Elder’s opposition to vaccine requirements. Newsom
eagerly pointed it out in appearances. And by early September, the governor had
begun to build a comfortable lead over the forces pushing to recall him and
install Elder or someone else.

Public polling followed that trend, as well. A poll by UC Berkeley’s
Institute of Governmental Studies released days before the recall showed that
the pandemic was at the top of voters’ minds. Forty-nine percent of likely
voters said that they believed Newsom’s response to the coronavirus was “about
right,” and of those voters, 82 percent said that they approved of Newsom’s job
performance overall. The poll also found that 60 percent of voters disagreed
with the argument that Newsom had “greatly overstepped his authority as
governor” in responding to the pandemic.

The Public Policy Institute of California released a poll in the days before the
election that showed that 61 percent of Californians support requiring proof of
vaccination to enter certain large outdoor gatherings and indoor venues, and
around six in 10 also supported how Newsom and Biden were handling the
pandemic. This polling appeared to bear out in the immediate aftermath of the
election. According to CNN exit polling, 81 percent of
respondents who voted against the recall said that the coronavirus was the most
important issue facing California. Eighty-four percent of “no” voters also said
that vaccines are a public health responsibility.

In the end it appears Newsom won comfortably, a decided shift from
some of the headier days of the recall when the prospect of Elder or someone
else replacing Newsom was not entirely laughable. At about two-thirds of the
votes counted, Newsom led by a 30-point margin, according to the Associated Press.

It’s an outcome that other Democratic campaigns are hoping to
replicate and that top Democrats are signaling is a strong approach in a
midterm that looks promising for Republicans. A day after the recall election,
President Biden and Vice President Harris released separate statements hailing
Newsom’s victory. Both congratulatory statements touched on Newsom’s approach
to the pandemic.

“This vote is a resounding win
for the approach that he and I share to beating the pandemic: strong vaccine
requirements, strong steps to reopen schools safely, and strong plans to
distribute real medicines—not fake treatments—to help those who get sick,”
Biden said in his statement.

Similarly, Harris said, “The pandemic has reminded us who we can count
on, and Californians know they can count on Governor Newsom. He is focused
on beating back Covid-19 and helping the state make a big comeback.”

Of
course, this first test run was in deep-blue California, where Democrats outnumber
Republicans by about two to one. Virginia may be much more telling. There, former Governor Terry McAuliffe’s campaign has aired multiple ads attacking Republican opponent
Glenn Youngkin on masks and Covid-19. Virginia polls right now show McAuliffe a
few points ahead. In New Jersey, the third and easiest state for Democrats
among the three 2021 gubernatorial contests, incumbent Governor Phil Murphy’s team
has repeatedly attacked
Republican opponent Jack Ciattarelli for pandering to “anti-maskers and Covid deniers.”

All
three of these contests are in basically blue states, so if all the Democratic
candidates win with a heavy emphasis on bashing their opponents over dealing with
Covid, that still might not be enough to stave off what could be a disastrous
midterm election. After all, the most
competitive races—the ones that could decide control of Congress in 2022—are in decidedly purple or red-leaning states: Georgia, Florida, Arizona,
Pennsylvania, Wisconsin, and North Carolina.

“The real lesson from
this is not what Democrats and Republicans learn vis-à-vis each other,”
Christine Pelosi, a Democratic strategist and California Democratic National
Committeewoman, said in an interview. “The larger question is, what’s happening
in those communities most decimated by Covid?”