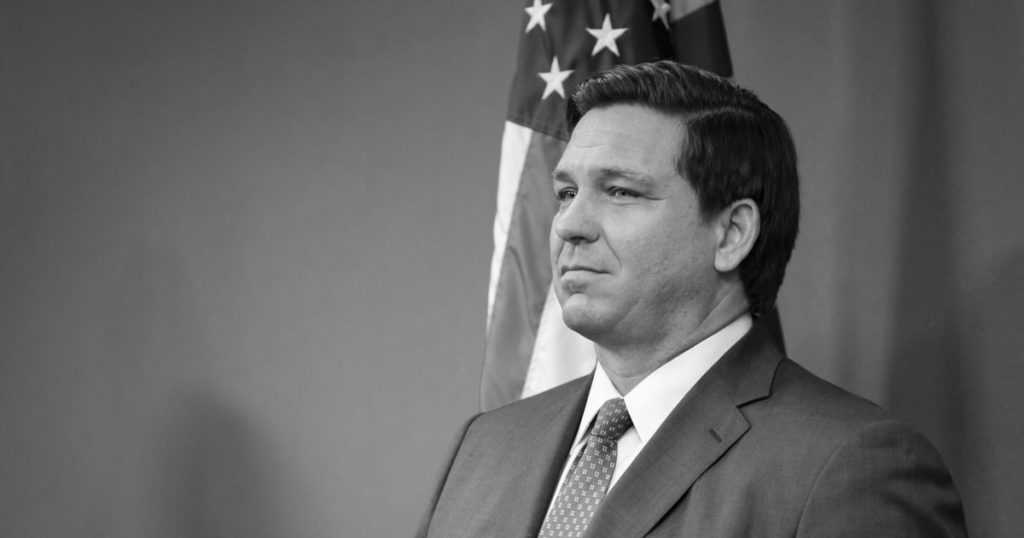 Lapado’s appointment is par for the course in Florida. At a news conference in Gainesville last week, DeSantis personally provided a platform for vaccine disinformation. One speaker stood next to the governor and said, “The vaccine changes your RNA.” Another implied that the vaccine can cause death. DeSantis later posted a video of the conference on Facebook. He also threatened to fine Florida cities and counties that require vaccines for employees and banned mask mandates in schools.

DeSantis has also blamed President Joe Biden for the fact that Covid-19 still hasn’t been contained. “You know, he said he was going to end Covid. He hasn’t done that,” DeSantis said in August. “At the end of the day, he is trying to find a way to distract from the failures of his presidency.”

Across the country, Republican leaders seem increasingly comfortable amplifying anti-vaccine rhetoric and conspiracies while banning mask and vaccine requirements, even though unvaccinated people are causing the virus to spread and increasing the likelihood of more coronavirus variants. And DeSantis is not the only Republican seeking to blame Biden for the latest Covid surge.

This raises a cynical question: Do some Republicans think they can reap political benefits from the continued spread of Covid? And if so, how might that calculation factor into their policy decisions?

Republican Gov. Greg Abbott of Texas banned government mandates for vaccines and barred local governments and school districts from enacting their own vaccine mandates, even though schoolchildren are not yet eligible for the vaccine. Indeed, as of Tuesday, nine states have banned mask mandates in schools — all with Republican governors. Georgia Gov. Brian Kemp, leader of a state that has not yet banned masks in schools, issued an executive order banning proof of vaccination by state government — an order that includess public schools and public universities.

On the federal level, Sen. Ted Cruz, R-Texas, has introduced his own bills to ban mask and vaccine mandates. House Minority Leader Kevin McCarthy, R-Calif., is openly opposed to vaccine mandates as well.

“Keeping your neighbors and your co-workers healthy is a choice,” Reeves has said, suggesting his definition of freedom means being able to infect neighbors and co-workers with a deadly virus. Meanwhile, Mississippi has one of the lowest vaccination rates in the country and as of last week had the highest death rate.

People like Cruz, a Harvard Law School graduate, must know they are spreading a legal fallacy when saying things like Biden’s mask requirement is “unconstitutional” and that “the vaccine mandate is going to be struck down in court.”

Moreover, laws commonly limit the liberty of some people to protect the health and safety of others. That’s why we have speed limits, laws against drunk and reckless driving, worker protections and laws against dumping toxins in drinking water. But fired up anti-vaxxers are waving signs that say things like, “I call the shot, not you,” and, “My body, my choice: Say no to mask mandates.”

While the virus is mostly crushing red states (for now), the damage is not limited to Republican voters or consumers of right-wing media.

While the virus is mostly crushing red states (for now), the damage is not limited to Republican voters or consumers of right-wing media. On the other hand, DeSantis, Abbott and Cruz are vaccinated. In fact, every single Republican governor and the majority of the U.S. Congress is vaccinated. Fox News implemented its own vaccine requirements even as their top personalities attacked them.

In other words, Republican leaders are getting vaccinated while encouraging others to reject vaccinations, vaccine requirements and mask mandates. When their constituents do get sick, however, these same leaders are blaming everyone but themselves. DeSantis wasn’t the only Republican governor to try to blame the Covid surge on Biden. Kemp also tried to blame Biden for his state’s low vaccination rate, accusing the president of giving “mixed messages” regarding masks and vaccinations. Scott Jennings, a Republican campaign adviser and former special assistant to President George W. Bush, railed against Biden’s “failures [in] handling the pandemic” and Biden’s inability to “convince the unvaccinated crowd to get their shots.” He also said that at the midterms, Biden should be held responsible for the number of people who died of Covid while he was in office.

Former President Donald Trump, meanwhile, has claimed Americans are not taking the vaccine because they “don’t trust” Biden. Trump also claimed, without evidence, that people were more interested in taking the shot while he was president.

At least among the conservative base, this tactic is working. At a Conservative Political Action Conference in July, the crowds cheered when a speaker said the U.S. government failed to “sucker” people into getting vaccinated. They also cheered the fact that Biden hadn’t met his summer vaccination goal.

In 1992, President Bill Clinton’s strategist James Carville popularized the phrase, “It’s the economy, stupid.” Ever since, the idea that voters reward the political party that creates a strong economy has been conventional wisdom.

It has already cost nearly $6 billion to hospitalize unvaccinated people during the latest Covid surge. These costs are “borne not only by patients but also by society more broadly, including taxpayer-funded public programs and private insurance premiums paid by workers, businesses, and individual purchasers,” wrote the authors of an analysis published through the Kaiser Family Foundation and Peterson Center on Healthcare Health System Tracker. Bankrupting hospitals and depressing entire industries is obviously not good for the economy, but it could be good for the GOP in the midterms.

While most Americans support vaccine and mask requirements, a majority of Republicans are opposed to them. Elected Republicans who are more afraid of conservative primary challengers than Democratic rivals may have concluded that keeping their base fired up and angry is a better strategy than bringing their views in line with a majority of Americans — and public safety. And the “Democrats want to take away your freedom” drum is certainly a way to thrill the base.

Unfortunately, it also will lead to more illness and death.

Teri Kanefield, a graduate of the University of California Berkeley School of Law, is the author of numerous articles, essays and books, including the 2015 Jane Addams Book Award winner “The Girl from the Tar Paper School.” For 12 years she maintained an appellate law practice in California.