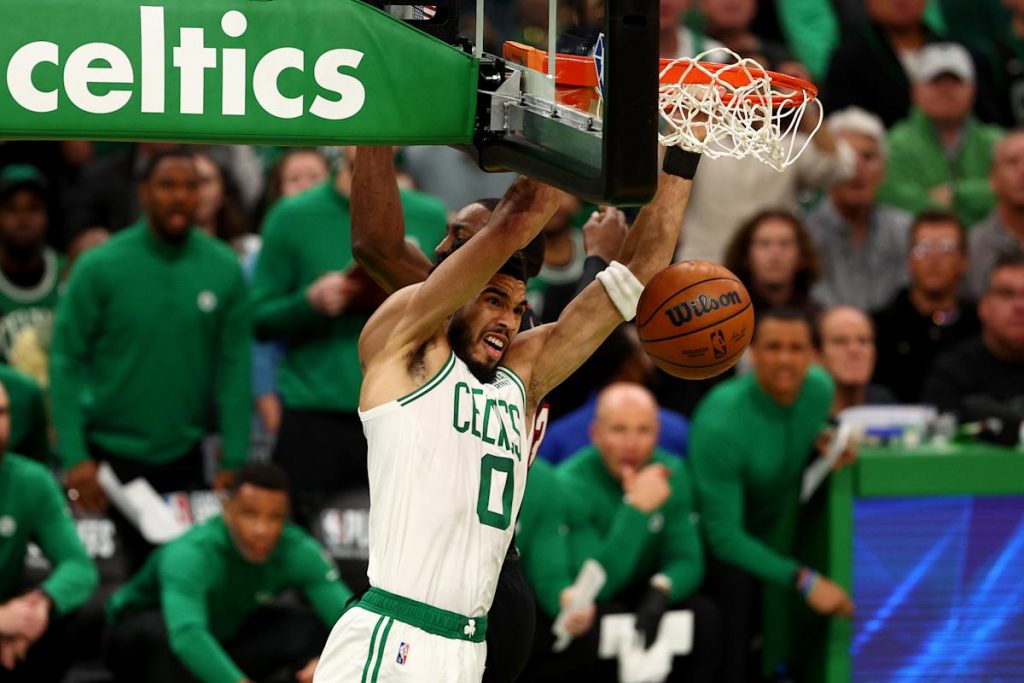 For the fourth time in as many games in the Eastern Conference finals, one team blitzed the other, and one of the strangest best-of-seven series in recent NBA memory is somehow headed back to Miami tied, 2-2.

The Miami Heat missed their first 14 shots on Monday night, scored the fewest points (one) through the first nine minutes of a playoff game this century and could not recover in a 102-82 loss to the Boston Celtics.

It was a mirror image of Saturday’s Game 3, when the Heat led by 21 points by the end of the first quarter and as many as 26 points in the first half, only Miami never threatened to mount a comeback in Game 4.

Derrick White, starting in place of injured Celtics guard Marcus Smart (right ankle sprain), scored the game’s first seven points on Boston’s way to an 18-1 lead. White nearly outscored the Heat by himself — and Tatum actually did — in an opening quarter their team won, 29-11. Tatum, shaking off a sore shooting shoulder, scored 12 points in each of the first two quarters, and the Celtics took a 57-33 lead into halftime.

Gone was Boston’s carelessness. Miami scored 33 points off the Celtics’ 24 turnovers in Game 3. Boston limited those mistakes to just three in Monday’s first half. Absent was Bam Adebayo, who scored a Heat-high 31 points on Saturday. He had as many points (three) as turnovers in the opening 24 minutes of Game 4.

The return of All-Defensive center Robert Williams helped the Celtics lock up the paint, where the Heat made just 14 of their 45 attempts. Even without Smart, the Defensive Player of the Year, Boston owned that end of the floor. Scouting resulted in two early strips of Adebayo as he spun into post moves, and he disappeared. No one bit on Jimmy Butler’s up-fakes, and Miami’s two best players combined for 15 points.

Neither Butler nor Kyle Lowry — respectively nursing right knee and left hamstring injuries — played the final 16 minutes of Game 4, as Boston’s lead ballooned to as many as 32 points. The Heat were also without Sixth Man of the Year Tyler Herro (left groin injury). How much the rest helps for Wednesday’s Game 5 in Miami remains to be seen. If the first four games are any indication, the series will be on full tilt again.

The Heat outscored the Celtics 39-14 in the third quarter of Game 1 and 39-18 in the first quarter of Game 3. Boston won 13 of the first 15 quarters in the series, including the first halves of Game 2, 70-45, and Game 4, 57-33. When they take care of the ball and play the defense that made them the NBA’s best on that end all season, the Celtics have controlled the series, but the Heat have had soul-crushing spurts.

Game 5 is scheduled for 8:30 p.m. ET on Wednesday in Miami. Stay tuned for anything.