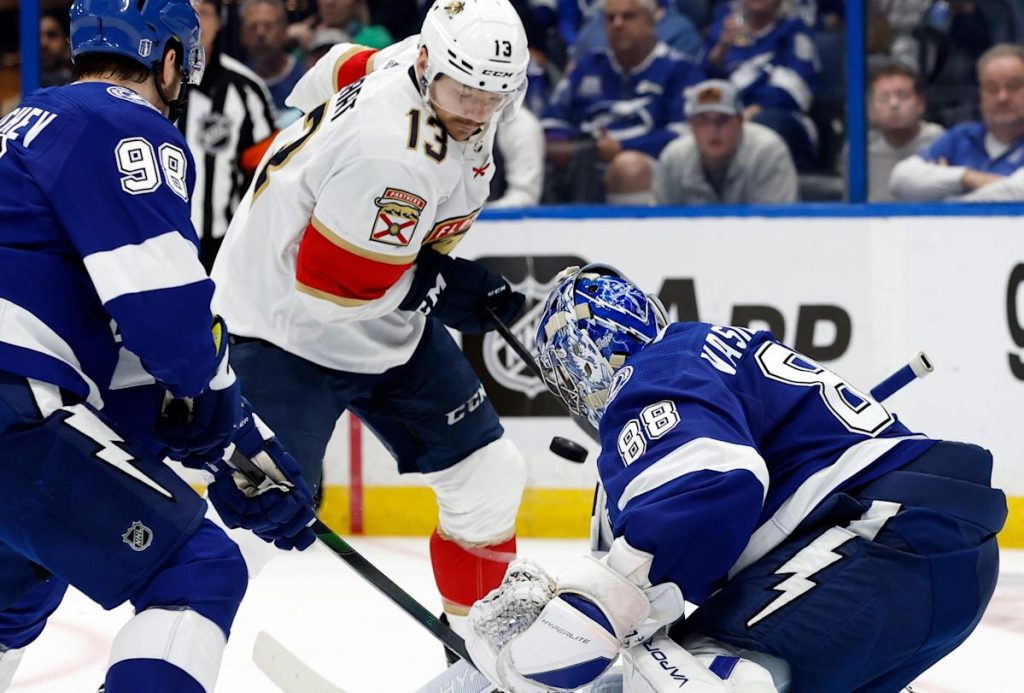 The Tampa Bay Lightning went into a mini-slump in April.

They lost key forward Brayden Point before facing the No. 1 overall Florida Panthers.

None of that matters. The Lightning soared into the third round on Monday night with a sweep of the Panthers and remain on pace to win a third consecutive Stanley Cup. They reached the third round for the sixth time in eight seasons.

The 2-0 victory wasn’t easy. They were badly outshot and had two goals overturned (from missed stoppages of play, with one review lasting more than eight minutes) before Pat Maroon got a good one in the third period.

“We all looked the monitors right away and realized it was good,” Lightning captain Steven Stamkos told reporters. “Another big goal by Patty. He seems to find those moments and that’s the beauty about our team is everybody contributes.”

The Lightning will face the winner of the Carolina Hurricanes-New York Rangers series. Here’s why you should never count Tampa Bay out:

Andrei Vasilevskiy has rebounded: He wasn’t a finalist for the Vezina Trophy for the first time since 2017. And he gave up at least three goals in his first six playoff games. But he was his usual brilliant self in clinching games in Game 7 against the Maple Leafs, then held the Panthers to three goals on 105 shots in Games 1-3. He topped that with a 49-save shutout in Game 4 to give him six shutouts in the last seven clinching games.

“We didn’t want to waste this performance by Vasi,” Stamkos said. “What an effort by him tonight.”

They’re going all out: The Lightning blocked 26 shots in Game 7 against the Leafs and 24 in Game 2 against the Panthers. A handful of players went to the trainers room in that second game and came back.

Kudos to Julien BriseBois: The Lightning lost their entire third line in the offseason. It took a while to reassemble their bottom six depth, but Corey Perry was a solid offseason pickup. He has five playoff goals. Trade deadline pickups Brandon Hagel and Nick Paul each has had a game-winning playoff goal.

Championship pedigree: It’s not just the core that won the back-to-back Cups. Maroon has won three in a row, including one with St. Louis. Perry won with Anaheim, plus went to the Final the past two years with Dallas and Montreal. Coach Jon Cooper, who has led the team through its six trips to the third round, knows how to make adjustments. It’s why the Lightning are 17-0 following a playoff loss.

The St. Louis Blues were unhappy with the Colorado Avalanche’s Nazem Kadri after two incidents in two years took out their players.

After the latest, an inadvertent collision with Blues goalie Jordan Binnington, Kadri also received social-media threats that got the NHL and the police involved.

“Unfortunately, I’ve been dealing with that for a long time,” he told TNT. “That’s sad to say but that’s just the fact of the matter. I’m just getting good at putting it in the rear-view mirror. It’s a big deal. I try to act like it’s not and try to move forward.”

Monday night, he did just that and hurt the Blues with his scoring touch.

Kadri got the first playoff hat trick of his career against Blues goalie Ville Husso as the Avalanche beat the Blues 6-3 to take a 3-1 lead in the Western Conference second-round series.

He put the Blues ahead 2-1 with an odd-man rush and did the “I can’t hear you” gesture.

Kadri later drew the ire of the Blues when he checked Perron. Both Pavel Buchnevich and Perron went after him, earning penalties. Perron was fined $5,000 on Tuesday for his cross-check. Kadri scored right after the 5-on-3 power play expired.

“To me, I’ll take all the punches I can, convert on the power play,” he said.

The third goal came in the third period, and he added an assist on Mikko Rantanen’s empty-net goal.

“Some of those messages I got doesn’t reflect every fan in St. Louis, but for those that hate, that was for them,” he said.

Kadri was suspended for eight games during the 2021 playoffs for an illegal hit on Blues defenseman Justin Faulk. But this season, he was incident-free as he scored a career-best 87 points. He’ll be an unrestricted free agent this summer.

The Panthers were aggressive at the trade deadline, adding Claude Giroux and Ben Chiarot to a deep core. Both are unrestricted free agents. So are Mason Marchment, Noel Acciari and Joe Thornton. Thornton, like Giroux, joined the Panthers because he thought they gave him his best chance at winning his first Stanley Cup. Thornton, 42, suited up in Game 4 for the first time in these playoffs. Could this be his final NHL game?

Monday’s game was the first time the Panthers were shut out this season. The season’s top-scoring team ranked 14th in the playoffs in offense. A puzzling 1-for-31 performance on the power play was a big factor.

“I think we’re closer than ever, but we got swept and there’s another level we’ve got to climb,” Panthers interim coach Andrew Brunette told reporters.

This article originally appeared on USA TODAY: NHL playoffs: Lightning sweep into third round vs. Panthers