Surfside mayor says security will be tightened at the condo collapse location, which he says is a ‘holy site’ 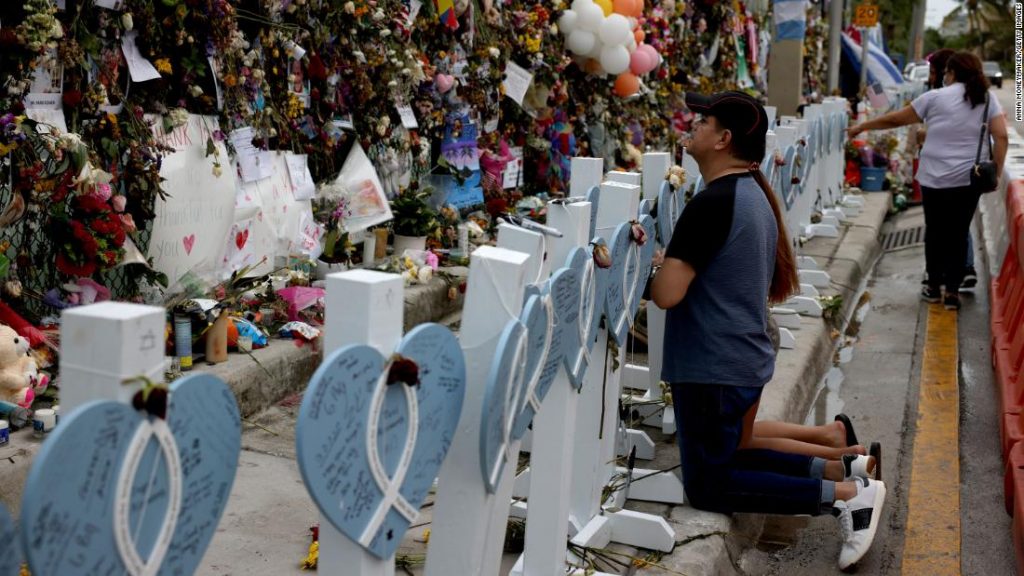 (CNN)As the death toll in the Surfside condo collapse nears 100, officials said security at the location will be tightened, with only authorized personnel allowed at the site in the near future.

Surfside Mayor Charles Burkett said he is speaking with city officials and families of the victims to discuss future plans at the location.

“I first want to touch on something that’s become more and more apparent as the operation has gone on — and that is the significance of that site with respect to the people who have lost their lives there,” the mayor said during a briefing Monday. “It is the right thing to do because it is obvious that this has become more than a collapsed building site, it’s a holy site.”

Crews recovered another body in the rubble overnight Monday into Tuesday, bringing the total number of victims to 95, and another 14 people are still unaccounted for. So far, 85 of the victims have been identified and 85 next of kin have been notified, Miami-Dade Mayor Daniella Levine Cava said.

Cava also stated that crews have been hard at work removing over 18 million pounds of concrete from the collapse site.

Among those identified over the weekend was Cassondra “Cassie” Stratton, who was in her unit at Champlain Towers South when she called her husband early the morning of the collapse.

“Her husband, Mike, and family again thank everyone who prayed for Cassie over the past two weeks and reiterated their eternal gratitude to the rescue workers whose courage and determination was unmatched,” a statement from her husband’s law firm Brownstein Hyatt Farber Schreck said Monday.

Michael Stratton had told the Miami Herald that his wife had called him and was “speaking frantically about their condo building shaking.”

The report added: “She told him she saw a sinkhole, where the pool out her window used to be. Then the line went dead.”

Stratton’s death is one of many horrifying stories to emerge from the tragic collapse, in which the victims have ranged in age from three to 92 and whose stories reflected the area’s rich cultural diversity.

Among those victims were the family of Marcelo Cattarossi. He told CNN on Monday that he lost five members of his family in the collapse: his parents, his two sisters, and his niece.

He became emotional talking about his 7-year-old niece, Stella, who had been the light of her mother Graciela’s and her grandparents’ lives. Taking after her artistic family, Stella had already begun painting, he told CNN.

Stella’s father was a Miami firefighter.

Marcello Cattarossi said his parents, 89-year-old Gino and Graciela, 86, met in New York nearly 70 years ago. The anchors of his family, they were what he described as “adventurous” and “fearless.”

Cattarossi said his father was a civil engineer, who had immigrated from Argentina, eventually moving the family to Miami in the late ’80s.

His mother kept the house filled with art and books and spoke multiple languages, he said. “[My mother] could do a perfect drawing,” Cattarossi said.

His sister, Andrea Cattarossi, 56, was an architect and a genius, he said.

She was visiting her parents and youngest sister when the building collapsed. Andrea Cattarossi leaves behind three sons in Argentina.

His other sister, Graciela Cattarossi, 48, was a professional photographer and a free spirit, he said.

He recalled one time the family was waiting for Graciela to show up for dinner. “Nobody knows where she was. And then we will get a phone call. And then she was like, ‘Oh no, I just landed in Greece. And I’m here for taking pictures. And I’ll see you guys next week.'”

Cattarossi said despite his loss, “My family was fantastic and it’s still going to be fantastic.”

“The process of making identifications has become more difficult as time goes on,” the mayor said. “We must rely heavily on the work of the medical examiner’s office … to identify human remains. The process is very methodical and it’s careful and it does take time,” she said.

Crews have worked on the site nearly non-stop since the collapse on June 24 and issues such as weather and shifting debris have created dangerous conditions, requiring teams to pause intermittently.

Levine Cava said there were some interruptions over the weekend due to lightning and she anticipates crews will again be hampered this week due to weather issues.

“The weather service is still embedded with our teams on site so we can get real-time updates to make sure that with any weather changes our first responders are protected from the element for their safety,” she said, “We do expect ongoing inclement weathers over the coming days so we do expect there will be a few brief pauses.”

As workers continue their recovery efforts, they face several hardships including the painful reality of their mission, the hazardous nature of the work as well as the threat posed by the Covid-19 pandemic.

Miami-Dade County Commission Chairman Jose “Pepe” Diaz and his chief of staff Isidoro Lopez are both self-isolating after testing positive for the virus, according to a news release from Diaz’s office Monday. Diaz had helped other local officials in Surfside following the collapse.

Earlier in the month, Miami-Dade Fire Rescue Chief Alan Cominsky said that at least six search and rescue members had been diagnosed with the virus.

The outbreak was among one of the teams from Florida but originated outside of Miami-Dade, he said.