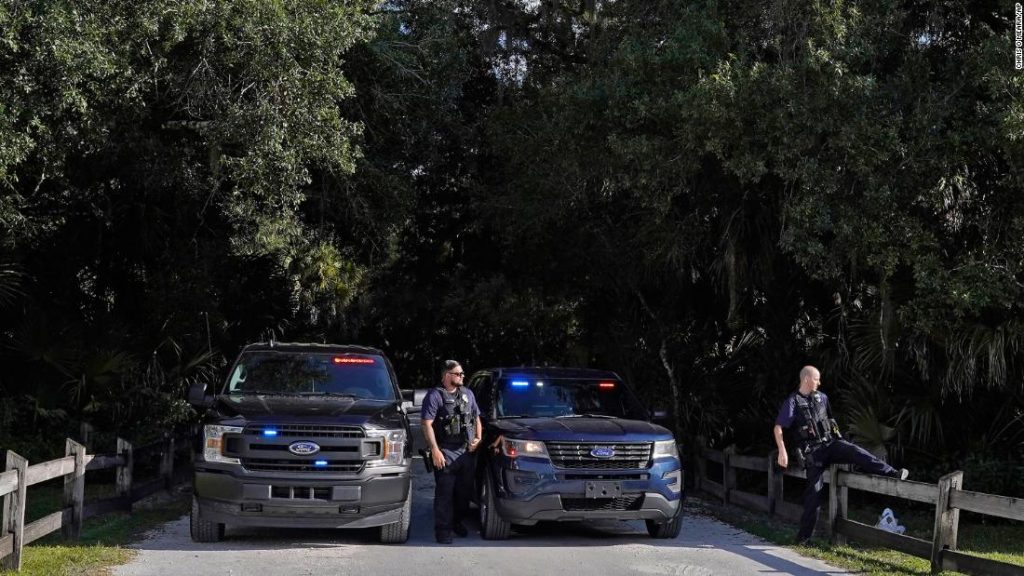 (CNN)Police in Florida said Thursday that skeletal remains found during the search for Brian Laundrie at the Carlton Reserve on Wednesday are of a human.

“They are human remains, no doubt there. I would say that the remains were consistent with one individual, you know skeletal remains,” North Port Police spokesperson Josh Taylor said in an on-camera interview with CNN.

Investigators found clothing believed to belong to Laundrie, he said.

“It’s consistent with what he was believed to be wearing,” Taylor said.

Taylor indicated the belongings had been out there for some time.

Laundrie went missing last month, a few days before authorities in Wyoming found the remains of his fiancée, Gabby Petito, whose death was ruled a homicide by manual strangulation.

Investigators also found a backpack and a notebook belonging to Laundrie, 23, near the remains while they were searching the Carlton Reserve in North Port, according to FBI Special Agent in Charge Michael McPherson.

“The notebook to my understanding has not been opened. You know, that will need to be processed,” Taylor said.

A source with knowledge of the investigation told CNN the notebook is “possibly salvageable.” The source said the notebook was “outside of the dry bag.”

“It had been clearly wet and they are going to use any potential means to dry that out before opening it,” according to the source, who added: “They’ll be very careful with it.”

The source said it is unclear how the notebook ended up outside the dry bag.

When Taylor was asked about whether a weapon was found, he said he could not comment.

When asked if there is an ongoing search for the murderer of Gabby Petito, he responded, “That is certainly not in the North Port Police Department’s purview.”

During a search with police, Brian’s father, Chris Laundrie, was the first to spot an item belonging to his son, according to Taylor.

Laundrie family attorney Steven Bertolino told CNN’s Chris Cuomo on Wednesday that “the probability is strong that it is Brian’s remains.”

The discovery came on Wednesday morning when Laundrie’s parents and law enforcement searched an area of the reserve that had been underwater but recently reopened to the public.

“It’s quite sad, you can imagine as a parent, finding your son’s belongings alongside some remains. That’s got to be heartbreaking. And I can tell you that they are heartbroken,” Bertolino told Cuomo.

“These are very, very difficult conditions. You’re searching in areas that you just can’t walk up and look. It’s not like you’re searching a house or a car,” he said. “These areas are huge and they’re covered by water.”

The exhaustive search for Laundrie stretched over a month as authorities tried to piece together what happened to him and Petito during their road trip through the Western US this summer.

Petito, 22, disappeared on the trip amid tensions in their relationship, and her remains were later found in Wyoming near where the couple had last been seen together. Teton County Coroner Dr. Brent Blue ruled her death a homicide and said she died by manual strangulation.

Laundrie, who had returned by himself to his parents’ home in Florida, refused to talk with investigators and then went missing in the nearby nature reserve. He has not been seen since September 13.

He has not been charged in her death, although he was indicted for allegedly using two financial accounts that did not belong to him in the days following her killing.

Authorities, including several K-9 units and off-road vehicles, returned to the reserve on Thursday morning to further search the area. A medical examiner arrived to the reserve on Wednesday, and a formal identification of the remains could take some time. A source close to the investigation told CNN that the remains “appear to have been there a while.”

“Based on the condition of the remains, it may take some time to officially identify. It is going to be a very thorough process with the medical examiner,” the source said.

Brian Laundrie’s parents were on scene when remains were found

Laundrie’s family had declined to talk publicly following legal advice, but they had directed authorities to where they believed Laundrie may be staying in the reserve, Bertolino said.

The parents — Chris and Roberta Laundrie — joined in the search Wednesday morning and found a bag belonging to their son at the park, which their attorney described as “happenstance.”

According to Bertolino, Laundrie’s parents informed the FBI and the North Port Police Department on Tuesday night that they wanted to visit the park Wednesday morning to search for their son.

Law enforcement met them there and closely accompanied them as they entered the park, Bertolino said.

“As they went further in, Chris ventured off the trail into the woods. He was zigzagging in different areas, law enforcement was doing the same thing. And Roberta Laundrie was walking down the trail,” Bertolino said. “At some point, Chris locates what’s called a dry bag. The dry bag is a white bag, laying in the woods, say 20 feet or so off the trail.”

“He did meet up shortly with law enforcement, they looked at the contents of the bag. At that time, law enforcement officers showed him a picture on the phone of a backpack that law enforcement had located also nearby and also some distance off the trail,” Bertolino told CNN.

“At that point, the Laundries were notified there was also remains near the backpack, and they were asked to leave the preserve.”

The remains were found “about 2 to 3 miles inside the Carlton Reserve, or about a 45-minute walk” from the entrance at Myakkahatchee Creek Environmental Park, Taylor said Wednesday.

When asked why the parents chose to go to the park on Wednesday, Bertolino said it was the first day it was reopened to the public.

“The parents had assumed that the experts, the FBI and all the tracking teams they had would be able to locate Brian based upon the information that we had provided them to the specific areas and trails in the park that Brian liked to visit,” Bertolino said. “The park had been closed to the public. There was really no other reason for the Laundries to go search anywhere else.”