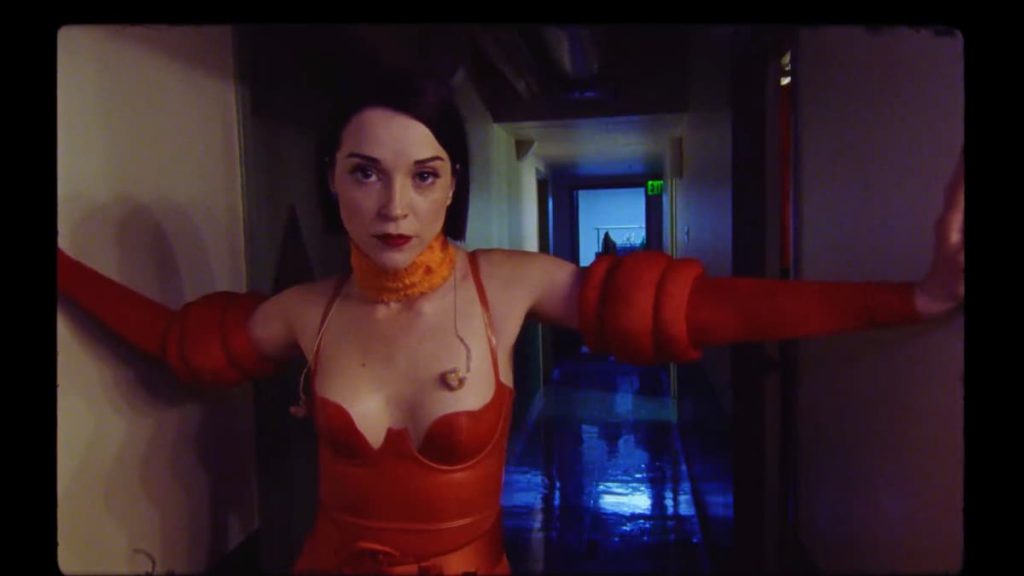 St. Vincent’s metafictional film “The Nowhere Inn” may not be a real documentary. But more than a year-and-a-half after it first premiered at Sundance, she says she has realized the movie captures some real moments in her career that already feel like a lifetime ago.

When St. Vincent — or the indie rock star also known as Annie Clark — first debuted “The Nowhere Inn,” it was as part of the album cycle for her Grammy-winning record “Masseduction.” Since then, she’s reinvented herself yet again for her sixth album “Daddy’s Home,” a sleazy and swanky-sounding ’70s throwback that’s far removed from the kinky, neon pop she was touring behind while making the film. And oh yeah, a global pandemic completely disrupted the live-concert scene, too.

Clark, in speaking with TheWrap, said that given the circumstances, “The Nowhere Inn” felt like a “perfect bookend” and “chapter closing” to an old moment in her career. And whether or not the movie is a true concert film, she’s glad that footage exists.

“Now that I have a new record out, it sort of gives us a little permission to look back without it seeming like the ‘Masseduction’ era was too long, if that makes sense. It feels nice to move on from something and forget how much work you did and then come back to watch it and listen to it and go, ‘Oh this is cool,’” Clark told TheWrap. “That was one of the reasons why I wanted to make the film in the first place, to have some legit footage of this era. Once I’m done with an era, I don’t really go back. I just move forward and try and constantly reinvent.”

Clark co-wrote “The Nowhere Inn” with Sleater-Kinney guitarist and her best friend Carrie Brownstein, who each play versions of themselves in the movie. Clark recruits Brownstein to make a concert documentary about the tour. But fearing that Clark’s offstage lifestyle doesn’t have the same excitement of her on-stage persona, Brownstein inadvertently leads Annie Clark on a path to transforming her personality, ego and consciousness into St. Vincent full time.

“The question of authenticity, the question of identity, these are things we’ve been wrestling with in our art and also just talking about endlessly for years. We wrote a lot of our conversations into the film,” she said.

Directed by Bill Benz, the movie is part concert doc, part “Portlandia”-style sketch comedy and part psychological horror. Clark and Brownstein with “The Nowhere Inn” wanted to pay homage to ’60s and ’70s art house cinema, and Clark feels that being immersed in this world in a way led her to the references she’d explore on “Daddy’s Home.”

“I think there was actually something to going back and watching the Nicolas Roeg canon and feeling very inspired by movies like ‘Persona’ and ‘Performance,” Clark said. “Obviously because film takes a while between being finished and being seen, I feel like I’ve done a bunch of creative things since. So I almost have enough distance to look back at and go this is wild. This is bananas. Wild that we made that decision.”

One of those choices that leaves a mark as she watches the movie back today is a scene in which Clark meets backstage with an adoring fan. When the fan begins to cry because of what St. Vincent’s music has meant to her, Clark too breaks down in tears, a “narcissistic” example of her own “terrible behavior.”

“It makes me cringe every time. I would never in a million years do that, but at that point in the movie I’m supposed to be so far gone. I can’t even allow someone else to have emotions without hijacking it,” Clark said. “People have cried or have been incredibly vulnerable, and I treat it with the sensitivity it deserves, but I have seen that kind of behavior from pop stars, fictional and real and all that. It’s just an example of such deep emotional blindness. Obviously the joke is on me and I’m so f—ing far gone. Blut every time I see it I cringe because it’s the worst thing you can do to a fan.”

But “The Nowhere Inn” has plenty of opportunities for Clark to goof around as well, including transforming her song “Eye of the Tiger” into a folksy barnyard jam or having a hilariously awkward and uncomfortable sex scene with a movie star. And while Clark has flirted with the movie business before, she’s open to seeing where her acting career may go from here.

“It was just a wild movie to make. I never asked myself, nor did anyone ask me if I could act. We just plunged whole hog into this scripted film. It didn’t even occur to me to think about it. Turns out I’m fine,” she said. “I did definitely enjoy it. To me it’s such an interesting creative challenge to inhabit someone else. As far as this first acting gig goes, I had the cushiest situation in that I co-wrote it and star in it with my best friend, and I got to play a version of myself, so I wasn’t Ophelia. No one asked me to do a gender queer version of King Lear.”

“The Nowhere Inn” opens in theaters and on digital on Friday from IFC Films, as does St. Vincent’s companion soundtrack album from the film. You can also check out a new music video for the film’s title song below.