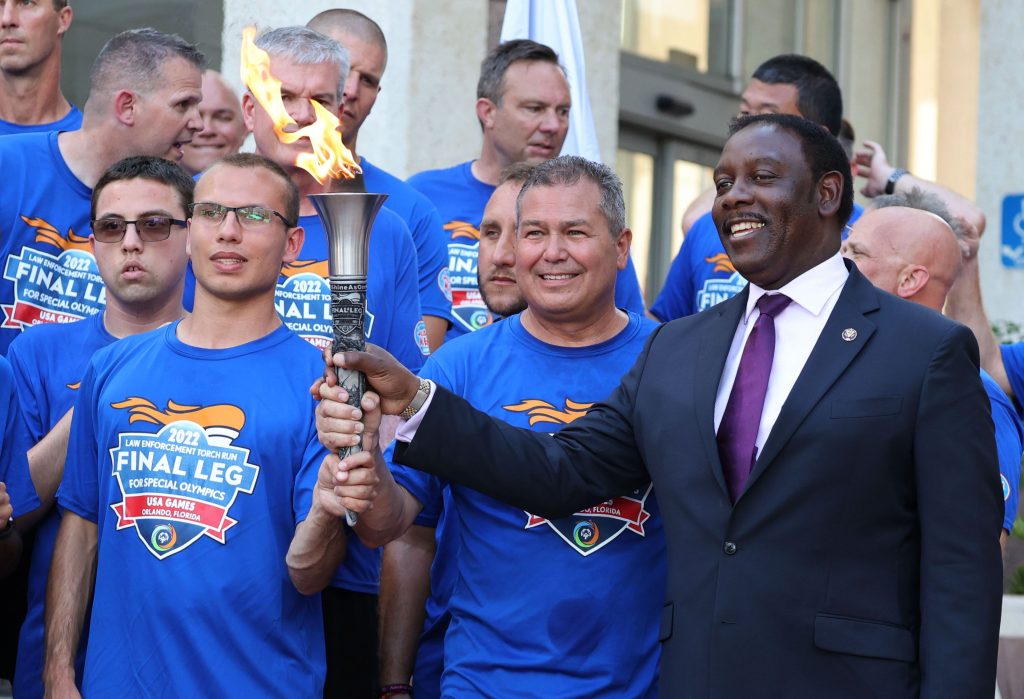 Florida threatened to fine Special Olympics International $27.5 million for requiring 5,500 participants at the USA Games in Orlando to be vaccinated against COVID, prompting the organization to drop the mandate.

“There needs to be a choice in this regard,” Gov. Ron DeSantis said at an event in Orlando surrounded by a cheering crowd that included athletes for the games set to begin Sunday. “Let them compete. We want everyone to be able to compete.”

News of the dispute was first reported by Jay O’Brien of ABC News.

In a letter sent to the Special Olympics International on Thursday, the state Department of Health said the organization’s requirement that athletes show proof of vaccination violated state law. It said there had been several attempts by health officials to avoid imposing fines and bring the event into compliance by not requiring proof of vaccination.

Surgeon General Joseph Ladapo said he had been negotiating with the organization for the past six months to resolve the issue “not for our sake but for the sake of these athletes.”

A statement from Special Olympics International, a nonprofit, said Friday it had lifted its vaccination rule “based upon the Florida Department of Health’s interpretation of Florida law.”

“Delegates who were registered for the games but unable to participate due to the prior vaccine requirement, now have the option to attend,” it said in a released statement.

“We don’t want to fight,” the statement said. “We want to play.”

The conflict arose after DeSantis signed an executive order last April banning so-called “vaccine passports,” preventing businesses and state and local governments from requiring proof of vaccination. A month later, the Florida Legislature passed a bill, signed into law by DeSantis, imposing a $5,000 fine for each violation.

A Sarasota business owner sued to have the law blocked, but Leon Circuit Judge Layne Smith rejected the argument that it violated the business owner’s First Amendment rights.

Judi Hayes, an Orlando attorney whose 11-year-old son has Down’s syndrome and sued DeSantis after he banned schools from requiring masks, said she was disappointed that the Special Olympics caved to the governor. She said she would boycott the upcoming games.

“We were planning on attending as spectators,” said Hayes, whose lawsuit against the governor was voluntarily dismissed. “If they won’t stand up for us, we won’t participate.”

People with disabilities, especially those with intellectual disabilities, are more susceptible to getting COVID-19 and more vulnerable to poor outcomes, Hayes said.

“The only reason we are alive to discuss this issue is because [the] vaccines work,” she said. “But he wants to curry favor with the anti-science troglodytes and bullies the Special Olympics. Who does that?”

Rubbing salt into the wound, she said, the organization is rewarding him by allowing DeSantis and First Lady Casey DeSantis to continue serving as honorary chairs of the 2022 Special Olympics games.

But there are others in the disability community who are adamantly opposed to vaccines because of potential side effects.

Elaine Valle, of Belle Isle, wants her 25-year-old daughter Isabella, who has cerebral palsy and epilepsy and uses a wheelchair, to participate in the games despite not being vaccinated.

Valle said her daughter’s neurologist advised against her being vaccinated because she could get a fever that could cause other complications. She added that the entire family has previously gotten COVID and had antibodies.

“We just found out this morning that she will be participating,” Valle said at the DeSantis event. “Isabella has from the age of 7 competed in swimming, golfing … and cycling as part of Special Olympics Florida … And then they tell us you’ve got to have these vaccine mandates.”

The vaccine protocols were put into effect in June 2020 and updated a year later, according to the Special Olympics website.

Joe Dzaluk, president and CEO of the 2022 Special Olympics USA Games, said the threatened fines have had no impact on the event itself.

“The games will proceed as planned, and we are happy to welcome any and all athletes,” he said.

Dzaluk, who had no part in the vaccine mandate or the decision to drop it, said only a small percentage of athletes withdrew from the games after having qualified.

“The attrition level, compared to previous games, is actually down,” he said. “It’s been in the single digits.”