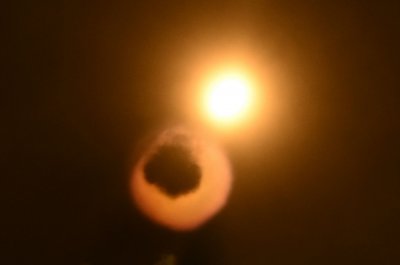 A SpaceX Falcon 9 rocket leaves a vapor ring as it launches at 12:27 a.m. from Complex 40 at the Cape Canaveral Space Force Station in Florida on early Sunday morning. Photo by Joe Marino/UPI | License Photo

Earlier, the company founded by billionaire Elon Musk launched 53 Starlink internet satellites at 12:09 p.m. Friday Eastern time from NASA’s Kennedy Space Center in Florida and then sent into space a radar satellite for the German military from Vandenberg Space Force Base in California at 7:19 a.m. Saturday Pacific.

Ten minutes after liftoff, the first stage went back to Earth, landiing vertically on the SpaceX droneship Just Read The Instructions in the Atlantic Ocean off the Florida coast.

The satellite was deployed into orbit about 1 hour and 50 minutes after launch.

Globalstar did give details about the launch of its spare satellite before liftoff, and SpaceX also didn’t mention the payload.

In the other flight from Florida, the Falcon 9’s first stage landed on the A Shortfall of Gravitas droneship.
It was the 100th successful mission with a flight proven orbital class rocket!