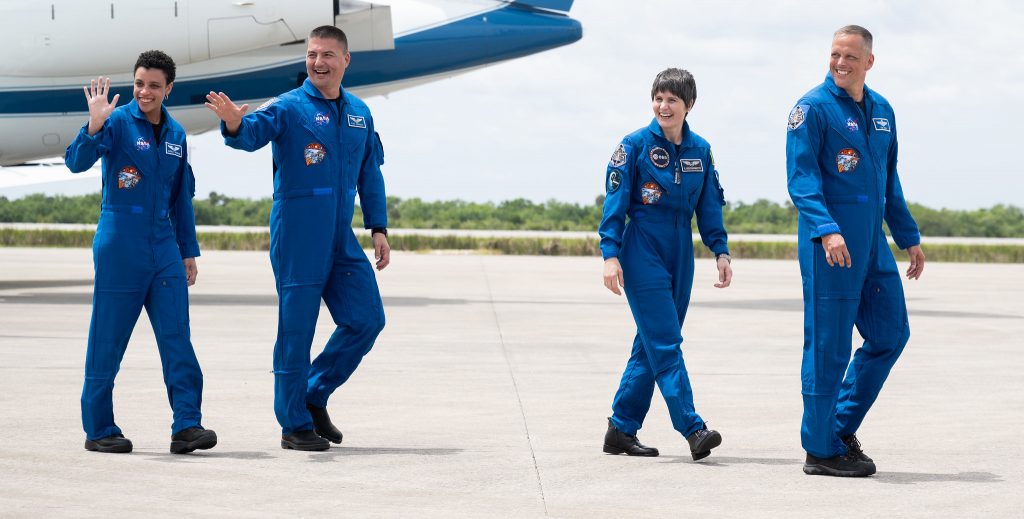 The astronauts set to launch aboard the SpaceX Crew-4 mission to the International Space Station have arrived in Florida ahead of their planned April 23 liftoff.

In just a few days, on this upcoming Saturday (April 23), a crew of four astronauts will blast off from NASA’s Kennedy Space Center in Florida on a six-month mission to the International Space Station. The Crew-4 astronauts include NASA astronauts Kjell Lindgren (who will command the mission), Jessica Watkins and Robert Hines as well as European Space Agency astronaut Samantha Cristoforetti. Today (April 18), the crew arrived in Florida ahead of their journey.

And in new photos released of the space-bound astronauts, you can see their excitement soon after they step off the plane in Florida.

Just a few days ago, on April 15, teams from NASA and SpaceX conducted a seven-hour flight readiness review for the Crew-4 mission. With no major issues detected, the mission got the green light to go ahead with a launch on April 23 atop a SpaceX Falcon 9 rocket from Pad 39A at KSC. Liftoff is currently set for 5:26 a.m. EDT (0926 GMT) that morning.

“Right now, everything looks good, and we have a clear path forward to that April 23 launch opportunity,” Jared Metter, director of flight reliability at SpaceX, said during a call with reporters following the FRR on April 15.

This mission will come closely on the heels of another SpaceX crew launch. On April 8, a Falcon 9 rocket launched four private astronauts to the orbiting lab as part of Axiom Space’s 10-day Ax-1 mission, the first fully private mission to the station.

Once the Crew-4 spaceflyers have reached the station, docked and entered inside, they will be greeted by the astronauts who have been living and working on board. Following a handover period that typically lasts a few days, the astronauts of SpaceX’s Crew-3 mission will depart, undocking and returning to Earth aboard their Dragon capsule.

Chelsea “Foxanne” Gohd joined Space.com in 2018 and is now a Senior Writer, writing about everything from climate change to planetary science and human spaceflight in both articles and on-camera in videos. With a degree in Public Health and biological sciences, Chelsea has written and worked for institutions including the American Museum of Natural History, Scientific American, Discover Magazine Blog, Astronomy Magazine and Live Science. When not writing, editing or filming something space-y, Chelsea “Foxanne” Gohd is writing music and performing as Foxanne, even launching a song to space in 2021 with Inspiration4. You can follow her on Twitter @chelsea_gohd and @foxannemusic.