Space X’s Motley Crew Proves They Have the Right Stuff 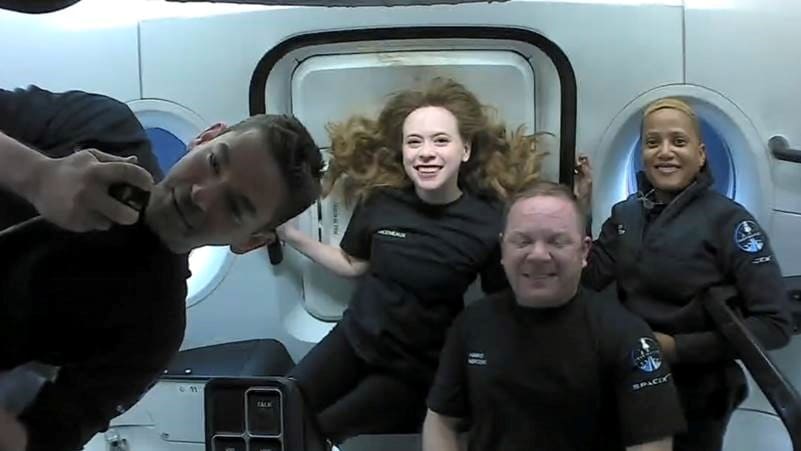 Many thousands of people touch down in Florida every day. But no other civilians have ever done it the way that Jared Isaacman, Haley Arceneaux, Chris Sembroski and Sian Proctor did at precisely 7:06 p.m. on Saturday, splashing down from space into the Atlantic. They were the crew aboard SpaceX flight Inspiration4, the first non-professionals to orbit the Earth for three days, and at a height of 366 miles, higher than the International Space Station. John Glenn, the first American to orbit the earth in 1962, reached a height of just 162 miles.

On its descent the capsule decelerated from 17,500 mph to 350mph, including the usual heart-stopping minutes when, because of high friction heat, communication is lost between it and mission control. Then there was an outbreak of applause from control as the braking parachutes popped out and, swinging gently under them, the capsule was visible.

This was a rare moment of live drama because everybody following this gravity-free trip has been frustrated by how little of it has actually been shared with the public. All the epic NASA voyages featured regular and well staged appearances by the astronauts. Even when limited to relatively primitive, flickering and grainy black-and-white videos these messages were followed by millions around the world.

The blackouts on this mission began early. Only minutes into orbital flight, just as the space cadets were about to get their first view of space, the SpaceX video feed went dark. The same thing happened when the crew did a video engagement with kids in a hospital, obviously an emotional high. We didn’t see it.

That’s because the most dramatic stuff is being held back until it appears in the finale of the Netflix documentary series about the voyage, to be aired on Sept. 30.

In truth, the gripping scenes here were not about how the hardware all worked, as amazing as it was. What we really wanted to see, what was dramatically new, was seeing how people other than career astronauts came through it.

So how did they measure up by the lights of an actual astronaut? I consulted Andy Thomas, a NASA veteran who logged 177 days in space on both American and Russian missions.

He was impressed. “It was a tough flight for the crew, in the confined space of the capsule for three days, that is tough duty. I’m also impressed by what SpaceX has done. They have developed a completely autonomous vehicle that can fly in low earth orbit and return safely without crew intervention. That is quite an achievement from where we were just 20 years ago with the shuttle.”

He pointed out that this was the same capsule that his astronaut wife, Shannon Walker, flew in May when she returned from a spell on the space station.

The reality is that nobody is ever going to be a walk-in astronaut. This crew had months of intensive training involving simulators and flying in supersonic jets. So talk about “kicking the doors open to space” for a lot more people is baloney. This experience will only ever be open to a select few.

That said, these four, in their attitude and verve, have managed to destroy an American archetype created in the movie version of the great Tom Wolfe fable, The Right Stuff, in which Sam Shepard, as Chuck Yeager, fused two macho spirits, the cowboy and the test pilot to define a new manhood in the sky.

But Yeager was never an astronaut and that was never the ethos of the early NASA astronauts who were more a fusion of nerd and Olympic-level athlete. But what, until now, made space flight seem so elitist was the almost superman qualities needed to qualify for it—years of arduous study and training.

Space has always been used as a prop of American exceptionalism, culminating in the moon landing. In the 1960s it became part of the “can do” culture and, in business, “space shot” was shorthand for taking giant innovative gambles. That seems long gone.

In its place we now have something new. This crew collectively represented a kind of Silicon Valley utopianism. You carefully select people with a range of human and civic virtues who can serve as role models for a nicer, fairer, more inclusive and more adventurous version of American life that we can all—literally—look up to. It’s an America purged of the rotting body politic and (all too timely in its message) one in awe of science and all that it can deliver for the public good.

That’s a tall order. But all four on this trip were, in their individual ways, engaging people.

Isaacman, the 38-year-old instigator of the whole idea and the man who bankrolled it, has a history that in another kind of person would have produced a recognizably charmless type. He is a high-school dropout who made an early and quick pile with a single idea, a better way of processing credit cards. He then used that to fund a really expensive wild boy hobby, flying supersonic military jets, so ably that he attained Top Gun status.

The only way he could really top that was to buy himself a ride into space (roughly reckoned to cost at least $200 million). But he also saw that he could leverage what otherwise would have been a self-indulgent stunt into doing good works, settling on St. Jude’s Children’s Research Hospital in Memphis as the beneficiary. He ran a Super Bowl ad for a fund-raising lottery for the hospital, in which the single prize was a ride with him in the capsule. (Donations have reached $163 million, including $100 million from Isaacman.)

At the same time, Isaacman found and enlisted 29-year-old Arcenaux, who represented one of St. Jude’s great success stories. At the age of 10 she was diagnosed with bone cancer in her left leg and suffered two years of intense chemo at St. Jude’s before defeating it. Later, she repaid her debt to the doctors by returning to work at Memphis as a physician’s assistant. And it’s Haley who, as the youngest on the flight, turned out to be a born entertainer, playing the role of a kind of joyous, weightless ballerina.

The other two, Sembroski, a 42-year-old Lockheed Martin data engineer in Everett, Washington, who won the lottery, and Proctor, a 51-year old geoscientist from Arizona who had earlier been short listed by NASA as a future astronaut but did not make the cut, were really cool with the technology.

Of course, hovering over this whole feat is the man who looks more and more like the Howard Hughes of our time, the elusive, sometimes batshit genius Elon Musk. In SpaceX he has built a record of peerless technical achievement and, in doing so, delivered it far more efficiently than the old profligate alliance of defense contractors and NASA.

His Dragon capsules ended America’s dependence on the Russians for delivering crew and cargo to the space station. Indeed, Musk effectively now owns that business: the Inspiration4 capsule was the third to be in space at the same time, the other two are docked at the ISS.

Nevertheless, Musk doesn’t ever seem comfortable making a big deal of his achievements. He’s stayed very much in the background of this flight, happy for it to look like Isaacman’s show—including the Netflix documentary.

In the darker labyrinth of Musk’s universe there is always the millenarian view that drives him to build bigger and bigger rockets—that should some final, engulfing catastrophe threaten to wipe out humankind on this planet we should be ready to bolt to a place we can colonize in space, Mars being the most likely but distinctly unappealing option.

On a more immediate challenge to his ethical role, how he can justify billionaires taking joyrides in his capsules when there are so many serious things to be fixed on earth, Musk had a ready and reasoned response in the documentary: we can surely afford to spend one percent of our resources doing spectacular deeds in space if the remaining 99 percent is being properly applied down here.