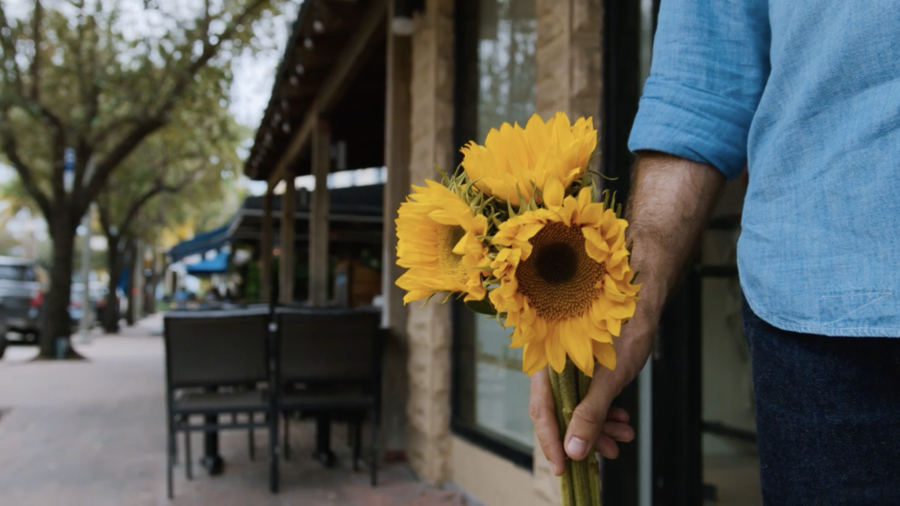 DELRAY BEACH, FL, August 14, 2021 /24-7PressRelease/ — In these times of uncertainty it seems that many of us have isolated ourselves from the rest of the world. Fear of interactions due to the possibility of getting sick and the fear of confrontation over polarizing socio-political views has led one man to be the change he wants to see in the world. South Florida singer songwriter, Ron Eisner took to the streets of Delray Beach, FL to break down some of these barriers with a simple act of kindness to unsuspecting strangers. With fresh sunflowers in hand, Ron brightened the days of those he encountered with the gift of positive vibrations and the light of a flower.

Ron describes the experience as “an exercise in love”. He goes on to say that “the song is basically a love song, but my good friend Chris Montegue (of the band Artikal Sound System), who helped direct the video, suggested that instead of doing a video about one person in particular, we would show love to the random people we met. I just thought everyone could use a little pick me up right now because it has been such a crazy year. It also made me feel very grateful, as you get the most out of a simple act of giving”

The love and light shared by these acts of kindness were captured by Second Mile Media, who shot and edited a video of the events synced to Ron’s latest single “Thin Line”. The goal is to inspire others to reach out to their neighbor with a gesture of kindness and empathy. The video is now available on Ron Eisner’s YouTube channel, released on Thursday August 12th at 8PM. Help spread the love by taking a photo with a sunflower and sharing it with Ron on his instagram account.

While Ron Eisner’s music is deeply rooted in traditional American songwriting, his unique life experiences and genre-hopping tendencies give him a sound all his own. Music was originally just a hobby for the Miami-based singer/songwriter, as he spent much of his life traveling the world. When his life was turned upside down by a catastrophic accident on a surf trip to Costa Rica, Ron turned to songwriting as a coping mechanism. Music soon became his sole outlet for expression. He started his career as a member of the ten-piece reggae band The Resolvers, which earned him recognition around his home state. As he sharpened his craft, he set out on his own, developing a deeply personal yet universally relatable style, rooted in poetic lyrics and instantly memorable melodies.