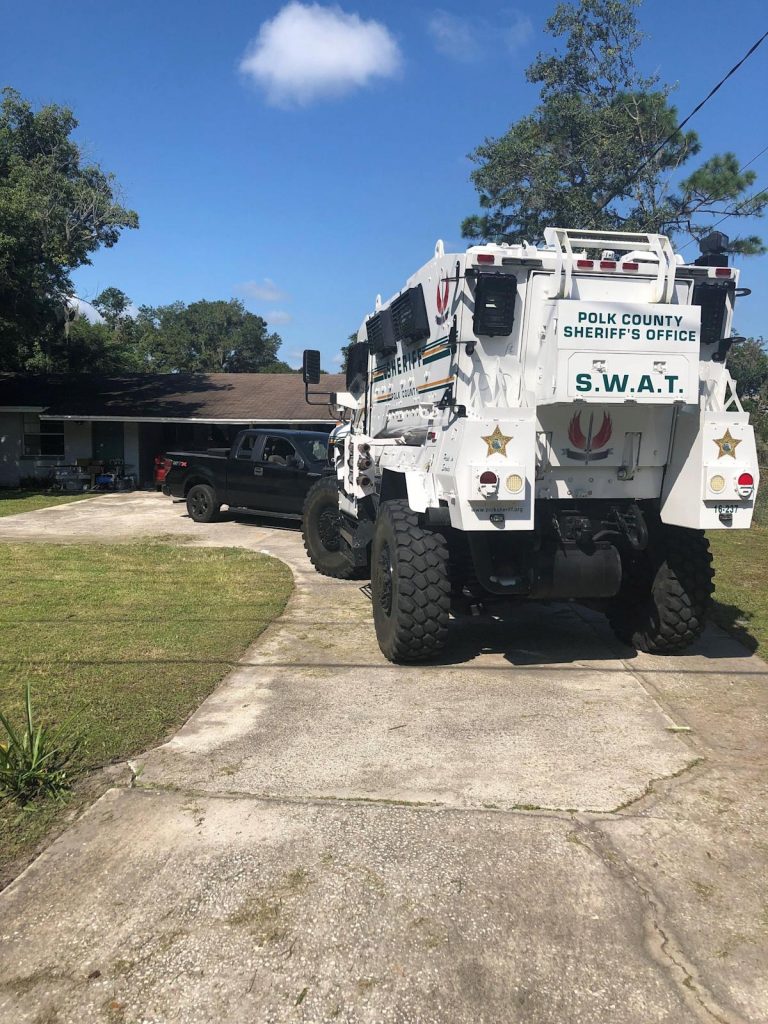 LAKELAND, Fla. — Four people were killed, an 11-year-old girl was shot and deputies came under fire early Sunday in a neighborhood in North Lakeland, Florida.

Judd said two separate shootouts occurred “in short order” between law enforcement and the suspect, Bryan Riley, 33, of Brandon, Florida. Riley was shot once and surrendered shortly after, he said. Lakeland police and troopers from the Florida Highway Patrol were also involved. No law officers were injured in the shootout.

After Riley was in custody, police discovered an 11-year-old girl who had been shot “multiple times,” as well as a man, two women and an infant dead.

Judd said Riley was a Marine Corps veteran and served in Iraq and Afghanistan. He spend four years in the Corps before being honorably discharged. He then spent another three years in the reserves.

He worked at ESS Global Corp., providing executive protection and security. According to his girlfriend of four years, whom he lived with in Brandon, Riley had PTSD and was occasionally depressed but never violent.

She said he worked security at a church in Orlando a week ago and came home saying he could speak directly to God.

Judd said that Saturday evening, Riley was in North Lakeland and saw a man mowing a lawn. Judd said Riley stopped and told the man that he needed to speak to the man’s daughter, Amber, because God warned him she was going to commit suicide. But the man and a woman at the residence told Riley there was no one there by that name.

Polk County shooting: What we know about the gunfire in Lakeland, Florida that killed four people

The incident was reported to the Sheriff’s Office, and a deputy went to the neighborhood at 7:30 p.m. Saturday. But Riley couldn’t be found. Riley’s girlfriend later told detectives that Riley returned home that evening and told her God gave him a vision that the man’s daughter was going to kill herself.

Nine hours later, Judd said, a lieutenant about two miles away heard two volleys of gunfire from the area of the original call. At the same time, 911 calls began coming in reporting an active shooting.

When deputies and other law enforcement arrived, they saw a truck on fire and a popping noise coming from the front yard. As they approached, they found an individual who was “totally outfitted in body armor and looked as though he was ready to engage us in an active shooter situation.” Judd said.

“But we didn’t see a firearm.”

Video: What has Biden done regarding gun legislation?

Judd said the man ran back in the house and deputies heard a gunshot, “and a woman scream and a baby whimper.”

The lieutenant tried to enter the house but it was barricaded, Judd said. He then went to the rear of the house and entered, exchanging gunfire with the suspect before backing out of the house.

Judd said three deputies at the front of the house were pinned down by gunfire from the suspect, and other agents on scene opened fire to help the deputies get to safety.

Shortly thereafter, Judd said things went silent and the suspect came out of the house with his hands up. He had been shot once.

Judd said the suspect was taken to Lakeland Regional Health Medical Center for treatment. While being treated, Judd said, “he jumped up and tried to grab the Lakeland police officer’s gun, and they had to fight with him again in the emergency room.”

They subdued the suspect and continued treating him.

Meanwhile, authorities on the scene entered one of the homes, where they found an 11-year-old girl shot several times. The girl told deputies there were three dead people in the house. Deputies found Justice Gleason, 40, along with a 33-year-old female and a 3-month-old boy dead from gunshot wounds. When deputies went to the home behind that one, they found another woman, the 62-year-old grandmother of the 3-month-old boy, shot to death. The Sheriff’s Office did not name any victims except Gleason, whose family agreed to release the name.

The 11-year-old girl was taken to Tampa for treatment. Judd said authorities were still searching for another young girl, “about 10 or 11 years old,” but there was no evidence that she was on scene.

Judd said Riley told deputies, “You know why I did this,” and described himself as a survivalist.

Judd said he also told detectives, “They begged for their lives, but I shot them anyway.”

Serrano was sentenced to death in 2006. But in 2016, the U.S. Supreme Court ruled Florida’s death penalty process unconstitutional and opened the door for Serrano, and others on death row, to be resentenced. He remains on death row awaiting the resentencing.