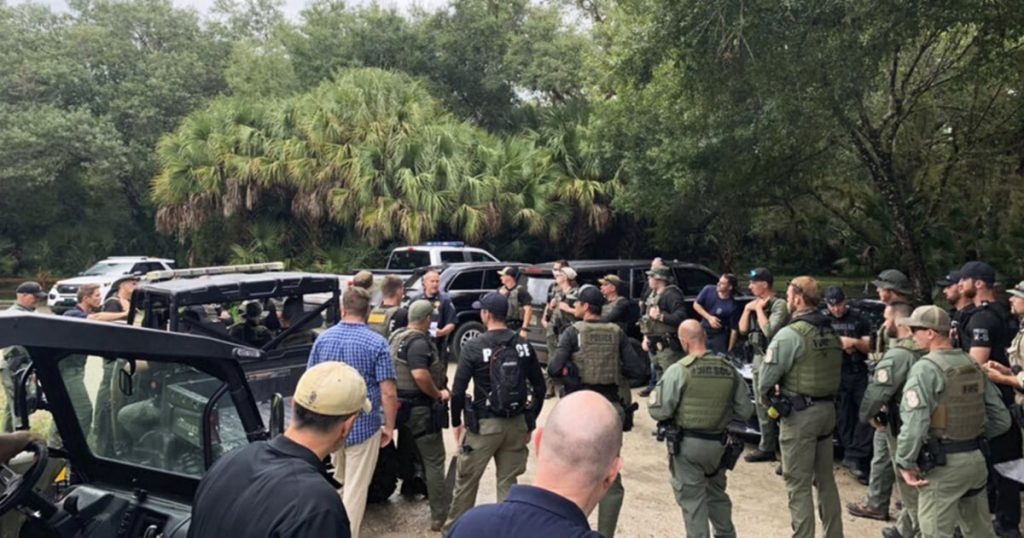 A body believed to be that of Gabby Petito was found Sunday in a national forest in Wyoming, authorities said.

The remains were found at a campground in Bridger-Teton National Forest, near Grand Teton National Park, which Petito’s mother said she planned to visit last month, said Charles Jones, the supervisory agent in the FBI’s Denver office.

The remains were “consistent” with Petito, 22, Jones said, adding that a forensic investigation would later confirm the discovery at the Spread Creek Dispersed Camping Area.

A cause of death had not been determined, he said.

“As every parent can imagine, this has been an incredibly difficult time” for Petito’s family, Jones said. “Our thoughts and prayers are with them. We ask that you all respect their privacy as they mourn the loss of their daughter.”

Investigators in Florida continued their hunt for Petito’s fiancé, Brian Laundrie, who was named a “person of interest” in her disappearance last week and vanished Friday night.

Saddened and heartbroken to learn that Gabby has been found deceased. Our focus from the start, along with the FBI, and national partners, has been to bring her home. We will continue to work with the FBI in the search for more answers.

Police in North Port, where the couple lived, said they were searching for Laundrie in the nearly 25,000-acre Carlton Reserve, a wildlife refuge southeast of Sarasota.

“The Laundrie family prays for Gabby and her family,” the statement said, according to NBC affiliate WBBH of Fort Myers.

The two had ventured on a cross-country tour of national parks in July, documenting their journey on YouTube and Instagram using the hashtag #VanLife. Laundrie returned home to North Port, south of Tampa, in the couple’s van Sept. 1 — 10 days before Petito’s family reported her missing, police said.

Petito was last known to have been in Grand Teton National Park in Wyoming late last month, when she stopped communicating with her family, police said.

The search for Brian Laundrie continues Sunday morning in the Carlton Reserve. A team of more than 50 looking for anything of note after his parents say this is where he went. We continue to corroborate all info in the search for him and Gabby. 1-800-CALL-FBI. pic.twitter.com/20nt70mezz

Police emphasized Friday that Laundrie has been named as a person of interest but is not wanted for a crime.

Petito’s family addressed his disappearance, saying through a family attorney: “All of Gabby’s family want the world to know that Brian is not missing, he is hiding. Gabby is missing.”

The FBI’s Denver branch said Saturday that it was searching for Petito in collaboration with the Wyoming Resident Agencies, the National Park Service, the U.S. Forest Service, the Teton County Sheriff’s Office and the Jackson Police Department.

Much of the search was conducted in the Spread Creek Dispersed Camping Area, which was closed to the public as it was being surveyed.

On Aug. 12, police in Moab, Utah, responded to an allegation of a physical altercation between the two. Body camera video released Thursday shows Petito wiping away tears as she tells the responding officer that she was struggling with her mental health, and it shows Laundrie being asked about scratches on his face.

North Port officials confirmed Friday that police interviewed a woman who said in a video posted to TikTok that on Aug. 29, she and her boyfriend picked up a hitchhiker, who she later realized was Laundrie.

Laundrie offered her and her boyfriend $200 for a ride away from Grand Teton National Park but later got out of the car abruptly, the woman alleged in her account, which authorities said they have not verified.

Laundrie’s sister, Cassie, told reporters that she has not spoken to her brother and is looking for answers.

The couple left Salt Lake City for Grand Teton National Park in Wyoming around Aug. 24, said Petito’s mother, Nicole Schmidt. Schmidt, who said she has not spoken with her daughter since then, said she received texts sent from her daughter’s phone.

Petito’s last text read: “No service in Yosemite.” It is unclear whether she ever made it to Yosemite and whether she sent the text. Her last post on Instagram is dated Aug. 25, with no location specified.