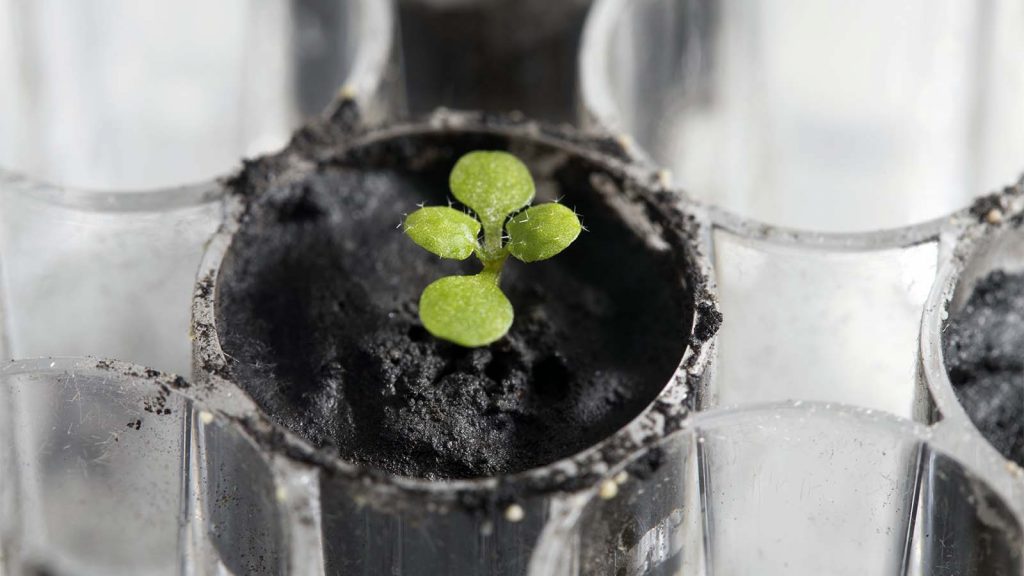 Now we know for sure, lunar regolith (aka moon soil) is capable of growing greenery. But plants grown in younger lunar soil are less stressed than plants grown in more mature soil.

The results, which were published May 12 in the journal Communications Biology, are critical steps in understanding how future long-term residents of the moon may be able to produce their own food and oxygen through lunar agriculture. These experiments are the first attempts to grow plants in actual lunar regolith rather than soil simulant.

“It’s really good news that plants can grow in the lunar soils,” study co-author Robert Ferl, a space biologist at the University of Florida, said during a May 11 press briefing. The challenges that the plants experienced show that “there is some very interesting biology, lunar biology, lunar biological chemistry, that’s yet to be learned. But the bottom line is that until it was actually done, nobody knew whether plants, especially plant roots, would be able to interact with a very sharp, very antagonistic soils that the lunar regolith presents.”

The Lunar Surface Is Stressful

The researchers sowed thale cress (Arabidopsis thaliana) seeds in small quantities of regolith preserved from Apollo 11, Apollo 12 and Apollo 17 landing sites, as well as in lunar soil simulant. Arabidopsis plants, which are related to mustards, cauliflower, broccoli, kale and turnips, have been grown in a wide variety of soils and environments, including in space.

“It is edible, but it’s not especially tasty,” lead author and plant biologist Anna-Lisa Paul said. “We learn a lot that can be translated into crop plants from looking at Arabidopsis.”

Moreover, Arabidopsis plants are small and have a growth cycle of about a month, which is ideal when trying to grow them in about a teaspoon’s worth of lunar regolith.

Although Apollo 11, Apollo 12 and Apollo 17 all landed in basaltic mare regions of the moon, the sites exhibited some key differences. Regolith at the Apollo 11 site is considered to be the most mature soil of the three. The site has been exposed to the lunar surface the longest, which has caused its soil to be weathered by the solar wind, cosmic rays and micrometeorite impacts. These maturation processes can alter the chemistry, granularity and glass content of the regolith. The other two sites have also been “matured” by these processes but to lesser extents, Apollo 17 least of all.

The team performed gene analysis on the plants after 20 days of growth and found that the regolith-grown plants showed stress responses related to salt, metals and reactive oxygen species. Those results suggested that much of the plants’ difficulty was related to the chemical differences between lunar regolith and lunar soil simulant, such as the oxidation state of iron.

Lunar iron tends to be in an ionized metallic state, whereas the simulant and Earth soils tend to contain iron oxides that are easier for plants to access. Ionized iron results from interactions with the solar wind, which explains why the most mature soil, that from Apollo 11, grew the most stressed plants.

“The simulants are incredibly useful for, say, engineering purposes … They’re wonderful for determining whether or not your rover is going to get stopped in the soil or not,” said co-author  Stephen Elardo, a planetary geochemist at University of Florida. “But when you get down to the chemistry that’s accessed by plants, they’re not really one to one. The devil is in the details, and in the end the plants are concerned about the details.”

These results show that lunar regolith is capable of supporting the growth of plants, which will be an integral component of any long-term lunar habitat. Plants will be able to support key functions like water recycling; carbon dioxide removal; and oxygen, food and nutrient production.

“It’s a well-organized and thought-out experiment to test growing plants on actual lunar regolith returned from the Apollo 11, 12 and 17 missions,” said Edward Guinan, an astronomer at Villanova University in Pennsylvania who has conducted plant experiments in moon and Mars soil simulants. “As the authors point out, the test plants are stressed and don’t grow well. The plants have characteristics of plants grown in salty or metal-rich soils. Maybe trying different terrestrial plants that do well in poor or salty soils might be an interesting follow-up.” Guinan was not involved in this research.

This study also shows that, although plants can be grown using in situ lunar resources, where those resources come from will be important for the plants’ growth success.

Regardless of where future lunar explorers build a habitat, “we can choose where we mine materials to use as a substrate for growth habitats,” Paul said. “It’s where the materials are mined from makes that a difference, not where the habitat exists.”

Kimberly M. S. Cartier is a senior science reporter for Eos.org. She has a Ph.D. in extrasolar planets, and covers space science, climate change, and STEM diversity, justice and education.

This article is republished from Eos under a Creative Commons license. You can find the original article here.