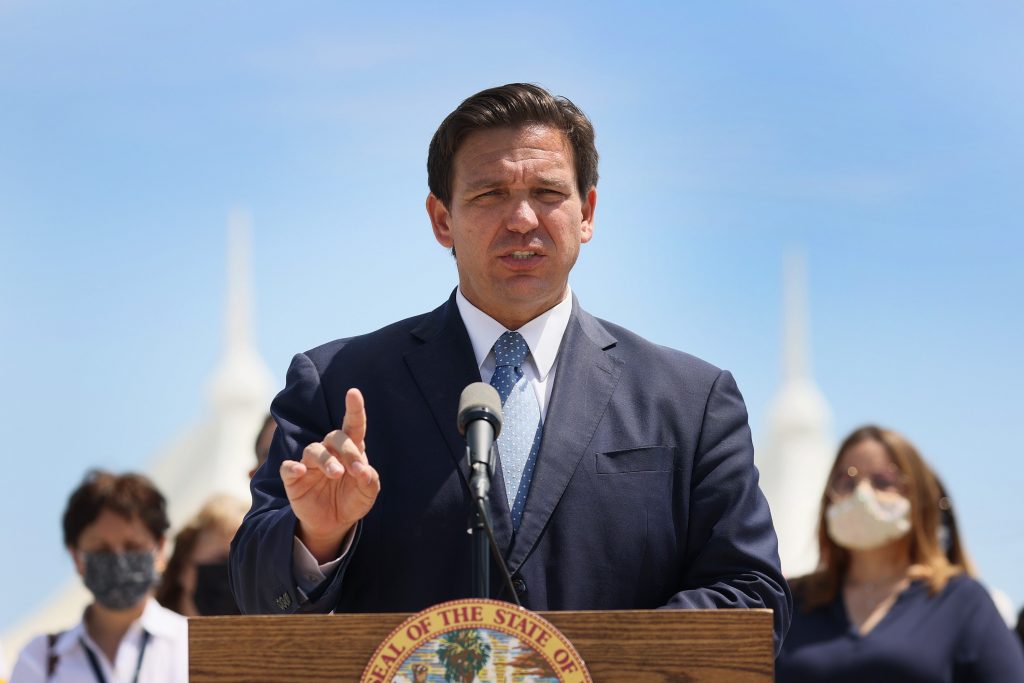 When it comes to America’s descent into a dystopian hellscape, most people have probably spent the last several weeks focused on things like the ongoing revelations from the January 6 committee regarding Donald Trump’s attempt to overturn democracy, and decisions from the Supreme Court ruling that there’s no more separation of church and state, women don’t have rights, and coal companies can kill us all. (To say nothing of the fact that, next term, they may make it legal for Republicans to steal elections.) But it’s important to remember that Trump and the high court’s christofascists aren’t the only people we need to worry about. There are also elected officials like Ron DeSantis, who has a not-insignificant chance of becoming president in 2024. Like Trump, the Florida governor takes immense pride in being a bully; he bullied the Special Olympics, he bullied Disney, he bullies anyone who disagrees with him, and in the words of one of his college teammates to The New Yorker: “Ron is the most selfish person I have ever interacted with. He has always loved embarrassing and humiliating people. I’m speaking for others—he was the biggest dick we knew.”

What might the country look like should DeSantis ascend to the White House? In a word: scary. In three words: really fucking scary. In 20 words: It’ll be the kind of place where teachers are warned not to display rainbow flags for fear of being prosecuted.

Yes, on Friday, Desantis’s Parental Rights in Education Act, a.k.a. the “Don’t Say Gay” law, went into effect in Florida, and it’s hard to overstate how terrifying this whole thing is. In addition to banning any talk of gender identity and sexual orientation in kindergarten through third grade, it also prohibits such discussions all the way through high school, saying that such topics cannot be discussed in any grade in a manner that is not “age-appropriate or developmentally appropriate.” (Naturally, the law does not specify what is considered “appropriate”; that definition may not come from the state’s Department of Education until next summer.) Critics believe the law was written in an intentionally broad manner to scare school districts, which parents can sue if they believe the measure has been violated. “When we talk about the culture of fear that this bill has created and the chilling effect, we’re talking about the fact that educators and school districts are scared to approach anything related to LGBTQ people or issues out of fear of lawsuits and professional ruin,” Florida representative Carlos Guillermo Smith told The Hill.

For instance, the Orange County Classroom Teachers Association accused school officials this week of telling teachers not to wear clothing with rainbows on them and to get rid of “safe space” stickers and photos of their same-sex spouses, according to NBC News. Last month, according to Palm Beach County high school special education teacher Michael Woods, the Palm Beach County School District “sent out a questionnaire asking its teachers to review all course material and flag any books with references to sexual orientation, gender identity or race.” (According to Woods, several weeks prior, the district removed the books I Am Jazz and Call Me Max, for seemingly referencing gender identity.) And on Tuesday, according to NBC, the Leon County School Board approved a “LGBTQ Inclusive Guide,” which includes a clause that says parents must be informed if a student who is “open about their gender identity” is in their child’s gym class or with them on an overnight school trip. “Upon notification or determination of a student who is open about their gender identity, parents of the affected students will be notified of reasonable accommodation options available,” the guidelines state. “Parents or students who have concerns about rooming assignments for their student’s upcoming overnight event based on religious or privacy concerns may request an accommodation.”

Meanwhile, as NBC notes, DeSantis has suggested this is only the beginning, saying in an interview with Fox News in April that “things like woke gender ideology have no place in the schools, period.”

Brandon Wolf, press secretary for Equality Florida—one of the groups suing the DeSantis administration over the law—told The Hill: “We’ve always understood what we’re up against in the state of Florida. We know these lawmakers, we know the rightward shift that has happened under Governor Ron DeSantis.” He added that he fears the measure will only increase anti-LGBTQ+ violence, which increased from 2020 to 2021 and is on track to be worse in 2022, according to the Armed Conflict Location & Event Data Project. “It feels very ominous that in a state that saw the deadliest attack on LGBTQ people in this nation’s history…that we would be having conversations about erasing our history, our lives, our lived experiences from classrooms,” Wolf said.

A group of “educators” reportedly proposed to the state’s board of education that slavery should be called “involuntary relocation.” Yes, really! Opposition to the suggested change, which would sort of be like calling Hitler’s systemic murder of 6 million Jews “population downsizing,” apparently came up during a June 15 meeting, at which a Democrat who represents Dallas and Fort Worth noted that the new wording would not be a “fair representation” of the slave trade. Board members, according to the Texas Tribune, have asked the group “to reconsider the phrasing,” writing: “For K–2, carefully examine the language used to describe events, specifically the term ‘involuntary relocation.’” Because apparently “Are you fucking kidding me?” or “What the hell is wrong with you?” is considered inappropriate.